Now – to conclude – the actual process of transitioning from Aperture to Capture One Pro is considered; photo adjustments in Capture One Pro are described; and an overall evaluation of the product is offered.

Starting with Version 8 Capture One Pro has had a specific routine to import Aperture libraries into the former’s equivalent, “Catalogs”. For this to work, note that Aperture must be updated to at least version 3.5.1. Even though the Apple product is no longer supported (or indeed readily available), if you own or bought it from Apple you can get these last two most needed updates (to 3.5.1, and to 3.6) from the Mac Apple Store under “Purchased”.

In the course of the Capture One Pro import process not everything is brought over from your Aperture Library. Unsupported and/or unimported are: Smart Albums, Books, Light Tables, Slideshows, Web Journals, and Web Pages. So you will need to “convert” your Smart Albums in Aperture before import and then recreate them once in Capture One Pro 8. Any hierarchy of keywords which you have created in Aperture is lost.

The list of what is imported, though, is much longer:

There is a specific tried and tested automated import procedure to transition from Aperture to Capture One Pro 8; the process described here is for “Referenced” Aperture libraries – ones where the software leaves images in situ on the filesystem and references them, rather than importing them into its own workspace.

This will be/has been the preferred type of library for many users because it does not tie them to what is now proving to be an unsupported and presumably eventually discontinued environment. In order to ensure that a Capture One Pro 8 Catalog is Referenced, you will select “Current Location” (not “Inside Catalog”) from the “Store Files” drop-down when importing individual images into a (newly-created) Catalog.

At this point, Capture One creates smart preview images for all items which have been successfully imported; and applies Adjustments (color etc) in accordance with its own algorithms. Note that these may be different from those in Aperture. They are thought by many specialists to be superior; certainly the RAW image processing of Capture One Pro 8 was found to be very impressive during this evaluation.

It’s worth emphasizing again that – as is the case with Aperture’s own Referenced libraries (and indeed for the equivalent in Adobe’s Lightroom) – your original images are not moved, not touched, not written to in any way by this process. No additional disk space is taken up. This is because they are not copied into Capture One Pro. Indeed, the original and continuing actual location of your images is (now) displayed in the Folders portion of the Library Tool in Capture One Pro. 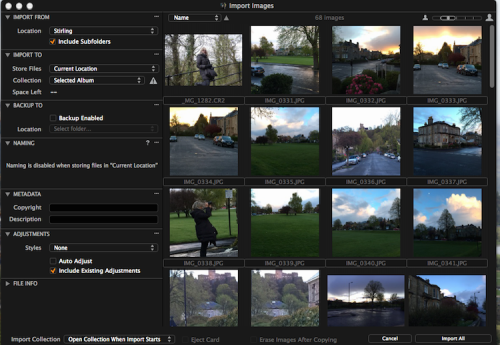 Note that if you imported an Aperture “Managed” library, Capture One Pro will display images and their paths inside a packaged “Aperture Library” file. You can – if you wish – drag and drop (such) images onto Capture One Pro “Catalog” icon also in the Folders tool. Again, it’s to be noted that this does in fact Move image files – right into Capture One Pro. Only do this if you are sure it’s what you want because you are moving away from Aperture once and for all; there’s no (easy) way back.

Indeed, while still experimenting and/or evaluating Capture One Pro for yourself, leave such Managed images in the Aperture library until you’re ready to dispense with Aperture. Note that it’d be unwise to maintain two systems in parallel: changes made in the one system (Aperture, Capture One Pro) are not reflected in the other – even when both are using the Referenced model.

After the transition from Aperture, you’ll be importing all future raw (tiff, jpeg or RAW etc) images “manually”. At import Capture One Pro 8 allows you to batch add a variety of Adjustments using Presets. This is a simpler process than it is in Aperture – though just as powerful. Selecting “Auto Adjust” lets Capture One Pro apply its own best guesses at how to optimize images on import.

Now that your images are all safely “contained” (cataloged, indexed, viewable etc) within Capture One Pro 8, you can set about improving the appearance of each one – photo-editing – unless what you shot with your camera is exactly as you like it and want it to be. There’s simple round-trip editing in external editing applications; though this wasn’t tested for this review.

All the expected ways of enhancing, correcting, editing and manipulating your images are available in Capture One Pro 8 … colors,  exposure, contrast, brightness, saturation, sharpening and so on.

Explanation of a couple of terms specific to Capture One Pro 8 may additionally be useful: by “Composition” Phase One means making changes to image “layout”… cropping, rotation/flip, perspective; and the more advanced “Overlay Tool”, which is commonly used in a tethered session to shoot for a predetermined layout – leave a space for text at the left, or fit into the outline of a heart, for instance.

Then there are about a dozen tools available under the rubric of “Local Adjustments”; they operate on selected areas of an image… perhaps an overexposed sky, a darker area under a bridge, or wayward hairs in the wind.

Indeed, Capture One Pro 8 offers many ways merely to correct your images. Repair Layers, for example, give substantial control over key aspects of image content… to remove unwanted objects or blemishes and then clone and heal them with easy and intuitive control over the size and shape of the area(s) being worked on.

Working in the “opposite” (!) direction, the Film Grain tool adds a variety of grains to give the effect of film stock, to disguise noise or just to add effect. As is typical with Phase One’s approach to such functionality, the algorithms are designed to optimize appearance for a human viewer; in this case, they’re actually based on the ways in which light interacts with silver halide… a very authentic result.

Grids are not restricted to horizontal-vertical… Composition (see above) can now be achieved using the Fibonacci Spiral and the Golden Ratio. As well as more flexible ways to straighten entire images along their horizontal or vertical axes than that available in Aperture, there is also a very useful “Keystone Correction” tool. Beginning photographers know all too well how buildings can appear to lean backwards due to camera tilt. Capture One Pro 8 can correct this kind of distortion caused by angle or perspective. There is no such equivalent in Aperture; it works impressively well. 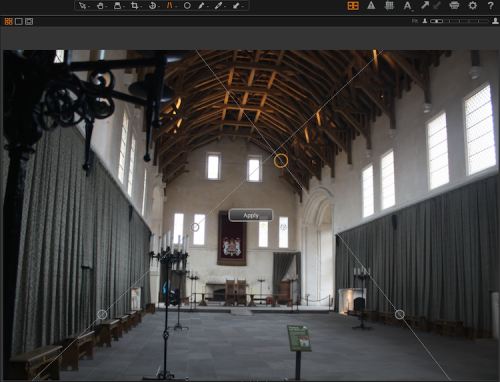 As with Aperture, you can further optimize your workflow by creating and saving a “Preset” for later use. This is a combination of settings including adjustments, lens correction, keystone, base characteristics and metadata information, for example.

These parameters can then be applied easily to other images. As with all Capture One Pro 8 controls, the grouping, logic and workflow for managing this useful process has been carefully thought-out; it worked very well during evaluation. Smart cursors allow you to CTRL/right-click over an image and immediately see settings for your chosen cursor tool.

“Process Recipes” allow you to build, name and of course re-use sequences and combinations of output controls; they run in the background and allow you to batch output multiple images according to a variety of parameters… convert to JPEG, scale, change resolution and so on.

The “Camera Settings” tool lets you configure actual camera settings of popular/common cameras… Canon, Nikon, Sony and of course Phase One’s own XF. As with Aperture, token-based file-naming allows you to create customized sequenced image names both during and after import… “Xth Yellowstone shoot in 2015_nnn.jpg”, where “X” and “nnn” can be auto-incremented; so “4th Yellowstone shoot in 2015_048.jpg”. Preferable to “_CR2456-01.jpg” etc.

During the evaluation period, it was obvious that Phase One’s technical support is as enthusiastic and determined as it is at times stretched. As well as a web-based technical support option at Phase One, there is a lively user forum (which is often visited by Phase One support staff), in-line help, a full 150-page (PDF) manual, and web-based documentation. Phase One prides itself on fast support; as it acquires more users from Aperture, one hopes this keeps up with demand.

Laborious though some users may find the process, meticulous maintenance and application of keywords to all images in the system pays inestimable dividends later. Most importantly it helps with searching… “Show me all photos I’ve taken of bronze statues near water”, for example will work because a filter returns only those images tagged with the keywords “statue”, “bronze” and “water”.

Aperture handles keywording very well. Its HUD (Heads Up Display) model makes the process of designing a useful hierarchy of such metatags easy and even inviting: a lot of work is involved – and anything that really reduces time and effort is surely likely to result in its actually being used.

A nature or wildlife photographer, for instance, might have top-level keyword hierarchies to indicate “Air”, “Land”, “Sea”. Each of these three might be subdivided by life-form type… “bird”, “mammal”, “insect”, “primate”, “fish” and so on. At a third level would come such distinctions as “feathered”, “biped”, “quadruped” “furry”; or colors, “winged”, “aphid”, “fructivore” (and then “apple-eater”), even “pet”, “poisonous”.

Like Aperture, Capture One Pro 8 supports dragging and dropping of (groups of) keywords onto (groups of) images. This works well. But there’s no concept in Capture One Pro 8.3 of a globally-managed “bank” of keywords independently to respect the taxonomy which careful and thoughtful photographers will usually design.

Most disappointingly, no keyword, once entered – either for (immediate) association with a specific image or set of images, or using the Library > Filters list – can ever be deleted in Capture One Pro 8.3. This is a major drawback for anyone aiming at flexibility with keywording, or – really – for anyone who mistypes a keyword (for instance “bird of pray”). Whether or not “aphimbian” [sic] has been applied to an image, it’s in your keyword list for good.

As might be expected by now, Capture One Pro 8 has a well-implemented type-ahead functionality in keywording. This counts against the process of assigning keywords though: “ape”, “aple”, “aphimbian” could all be repeatedly auto-completed by the software when you’ve typed “ap…” – perhaps without the user noticing, instead of what they really want. This is the main reason for the lower score given to the software here than would certainly otherwise be the case.

Conclusions: Capture One Pro version 8 offers a massive range of features. It achieves the balance needed to find your way around such rich functionality very well. Flexibility, logical organization, arrangement and access have been thoroughly thought-out and implemented.

Capture One Pro is without doubt the way to go for serious and professional “refugees” from the now discontinued Aperture 3 users.

Yes, Aperture is superior in direct online and hardcopy (integrated book) publishing, and keywording. Yet there are so many more, well-implemented features of Capture One Pro 8 that it must now be considered the new natural home for serious – and even moderately demanding “hobby” – photographers who wish or need to manage their assets properly and make even quite sophisticated adjustments to them. It’s a robust, well-designed, fully-featured and amply supported piece of software.

Pros: does almost everything that Aperture does; very well designed interface; massive range of useful features, intelligently arranged; strong company, with a wealth of well-produced support resources; not difficult to learn – especially for Aperture users; everything from the high level of user customization (particularly appearance of the workspace, managing menu blocks and groups according to where a user is in the workflow, assigning keystroke equivalents etc) has been carefully and intelligently designed. All in all, it’s robust software which does most of what most photographers will want.

Cons: inadequate keyword management; somewhat expensive (though scarcely half the cost of the original Aperture ten years ago, which did much less); not everything is preserved from your Aperture Library, but there are always workarounds.

One thought on “Capture One Pro 8 – Review, Part II”