On the far side of a lane of professional software application vendors, I rather stumbled across CalDigit. For the storage solution manufacturer from Placentia, in the outskirts of our very own sunny L.A., this was the first participation in the Paris Apple Expo. Yet, they had quite a number of visitors, interested in the impressive array of high performance hardware RAID storage boxes. And Li Chen, Caldigit’s director of sales & marketing from their Taiwan branch, had also one brand-new product up front – the new 399.00 US “Quadra RAID“, on display here as a prototype. As of today, this baby is not even visible on the company’s Internet page: 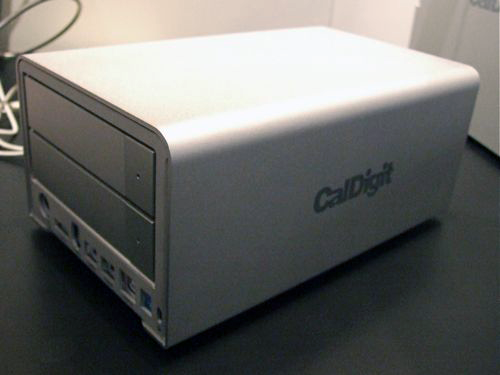 The enclosure is made of solid aluminum, and the outstanding features of the Quadra RAID are immediately visible: an amber-colored illuminated display with a 2-button interface on the front allow direct access to various menus to control available capacity, RAID status and more. A dedicated panel of 5 multi-color LEDs and the elegant aluminum power button add to the professional-grade appearance of the system.

On the back of the aluminum casing, there’s the reason for the “Quadra” in the name: a full arrangement of four different interface technologies: 2x FireWire 800, 1x FireWire 400, 1x eSATA and 1x USB 2.0 (that’s five ports, alright). Inline with the ports, Caldigit places the power jack as well as block of dip switches to configure the RAID mode (either RAID 0, 1 or JBOD) and the usual oval-shaped hole to attach a Kensington Lock. Another quality feature is visible from the back of the enclosure too: it uses just the same type of hot-swappable full metal drive modules as its bigger brothers.

This brings me to one thing Li explicitly mentioned: CalDigit claims to offer “Single Vendor Support”. That said, it means that CalDigit controls all parts in their products, so that if a component fails, say a drive module, a fan, a LED panel or a power supply, they will replace this component with a dedicated spare part. For the customer, this means they can stock original spare parts or order them as required. An important aspect looking for highly available storage systems.

In the following picture, Jennifer Yin of CalDigit California shows us the 8 bay “HDPro” (RAID 0/1/5/6/JBOD) with external PCIe connectors, up to 20 Gbps sustained throughput and its user-replaceable components, the “Quadra RAID” again and (in the back) the 4 bay “HD Element” (RAID 0/1/5/6/JBOD) with Mini SAS connection which is also easily user-serviceable (fans and power supply). On top of the HD Element, yet barely visible in the photo is the CalDigit “RAID Card” which fits any Mac Pro and supports up to 16 drives over four x4 Mini SAS connectors (3 external, 1 internal): 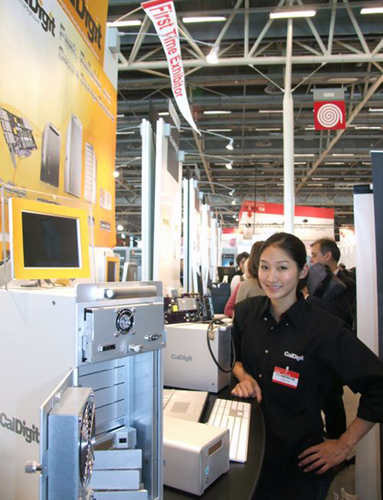 And here’s the final product news I brought home from the Apple Expo R3MIX’08 in Paris this year. Let’s start with Bernard de Fabribeckers from I.R.I.S in Belgium: 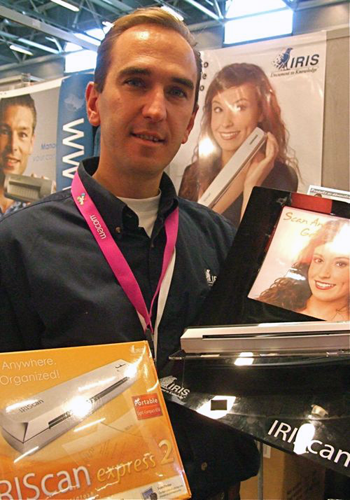 What Bernard called “The Belgium Sausage” is their new IRIScan 2 portable 600 dpi USB Scanner, available either in the “Express” or “Executive” package. The IRIScan Express 2 bundle sells for 129.00 Euros or US Dollars, just as you prefer. The Executive version offers the more complete software suite with the newer CardIRIS version 4 instead of 3 and the addition of “@Prompt Office 7”, a translation software (which is for MS Windows systems only anyway).

As both packages are otherwise identical and equally feature their powerful OCR solution REadiris Pro 11 for Mac, plus some other Windows-only software, the one reason for me to go for the Executive bundle would be the inclusion of CardIRIS 4. I personally had some trouble with version 3 not behaving exactly the way I’d expect Mac software to behave. Maybe this would be a good occasion to review the new version of CardIRIS… To be fair, the IRIScan is more than a business card scanner as it supports up to legal sized documents. And, even CardIRIS 3 did what it was supposed to: digitize a bunch of business cards. And damned fast too.

Last but not least – “be.ez“: simply because of their comfy wood and leather outfit their booth always stands out from the rest. And so does their casual presentation of “La Robe” neoprene skins for MacBook and MacBook Pro portables as well as their accessory pouches. This time, however, CEO Nicolas Cottard and Sales Manager Olivier Hache proudly showed off two samples of a new product line which will debut at this week’s Fotokina in Cologne/Germany: 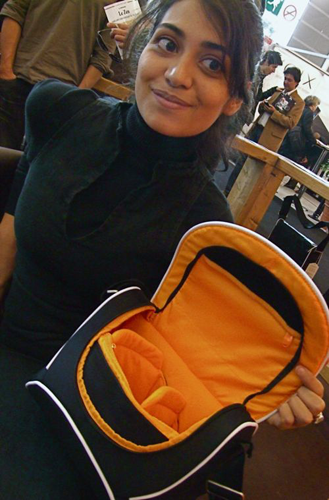 The compact yet spacious 59.99 US Dollar “La Besace” photo bag Ema holds here before my camera lens is the smaller variant of the one pictured in the next photograph: 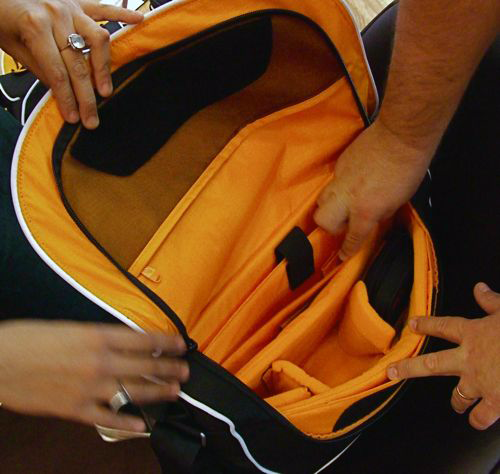 And, there’ll be a a much larger one available too, even capable of holding your portable Mac, apart from a wealth of photographic stuff. OK, this is the about-to-be-released family of photo and accessory bags in one shot: 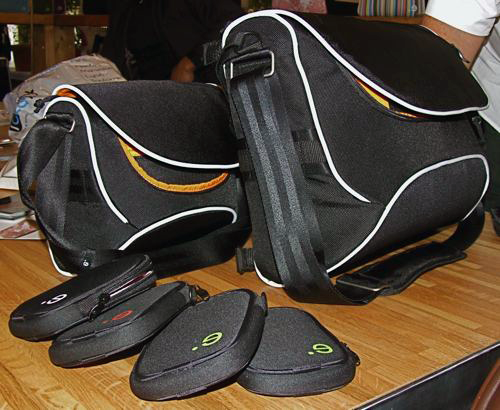