You know what a good memory for faces means, combined with frequent travels! You never know who the person is you’re sure you’ve met before. Enter Jackie Ballinger of Griffin USA. Simply didn’t expect her in Paris. But then Jackie showed me two of the most astounding little devices on the Paris Apple Expo: Griffin’s “AirCurve” and “Clarifi”.

Available starting in October, the “AirCurve” is for everyone who rather won’t miss a phone call while walking around the office. And it’s a bargain for just 19.99 Euros (just the same in US Dollars). Just dump your iPhone into the AirCurve – whatever sound the phone makes, will be massively amplified: 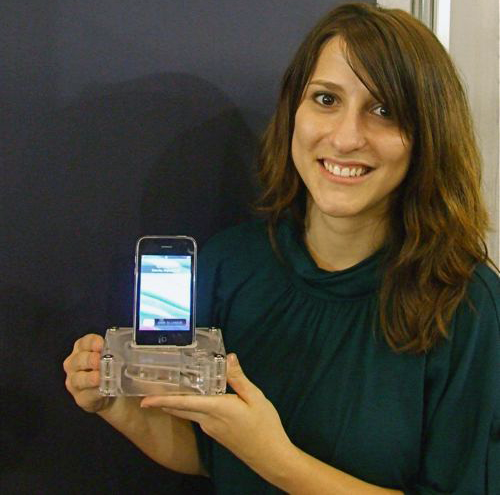 But, how? No wires, no batteries, not even any connectors – Griffin’s AirCurve is a true wireless amplifier! We could play the guessing game, but I’ll tell you: this ingeniously designed, cute piece of acrylic and steel doesn’t require external power. The AirCurve neither draws from your iPhone’s battery. It’s simply an acoustic spiral, like Corti’s organ in our ears, or the sound funnel from those old turntables, molded right into the acrylic base.

And they have another one ready for the holiday season: the 34.99 Euros / US Dollars “Clarifi” is Griffin’s answer to the less-than-perfect fix focus digital camera in the iPhone 3G: combining a plastic protection sleeve with a sliding macro lens, the Clarifi takes your mobile do-it-all to new boundaries. Maybe this is what those barcode-capable iPhone apps have been waiting for: 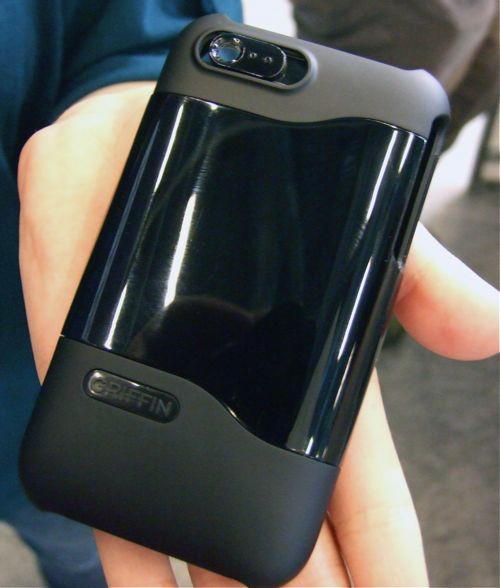 Almost on my way off the show floor, I finally managed to stop by at Logitech. Should have done earlier. So, there remained just a couple of minutes for the latest news.

This is Logitech’s new QuickCam Vision Pro, readily available in Europe and the US with a price tag of 99.99 Euros (129.99 US Dollars): 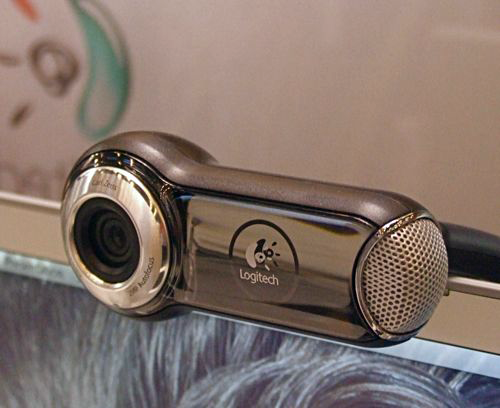 The Vision Pro is a true 2.0 Megapixel web cam which attaches to your MacBook or MacBook Pro, boosts a Carl Zeiss optical lens with auto focus and Logitech’s RightLight adaptive lighting technology and digital stereo audio.

Literally a “highlight” of this year’s Apple Expo, and brand-new is the “Illuminated Keyboard”. This ultraslim (max. height 9.3 mm), elegant keyboard of black finish with a transparent acrylic frame debuted in Paris and will be available in October for 79.99 Euros/US Dollars. The Illuminated Keyboard attaches via USB to any Mac or PC, the lighting of the keys can be adjusted in 3 steps or switched off completely – if you rather don’t look at what you’re typing: 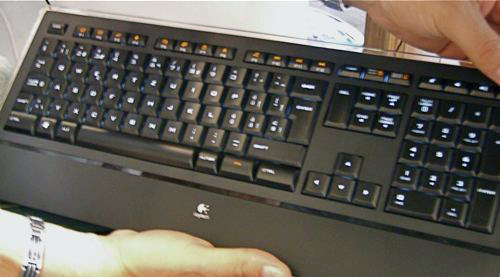 Other news from Logitech include a bunch of improved or new mice like the “V450 Nano Cordless Laser Mouse for Notebooks” (39.99 EUR/USD, “Nano” transmitter, available in black, red or silver). The one mouse, Dominique Gerber, marketing manager of Logitech France was very proud of though, is the “V550 Nano” (also a cordless Laser Mouse for notebooks) which features a metal scroll-wheel which to me appeared to offer the same comfort and fast scrolling as the MicroGear scroll-wheels from e.g. the MX Pro or VX Pro. The V550 Nano sells for 49.99 Euros (same in US Dollars) and also makes use of the new Clip-and-Go dock. This is actually a small knob you can attach to the top cover of your notebook and it will then securely hold the mouse, wherever you go. The Clip-and-Go dock comes in two colors (black and silver), is removable, so you do not need to wonder, whether you just irreversibly damaged your MacBook or MacBook Pro while applying this neat little device. 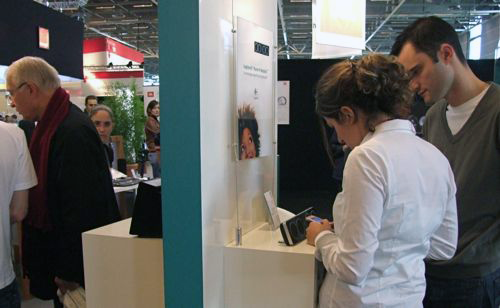 One last thing to mention is Logitech’s Pure-Fi line of iPod, iPhone and mobile phone speaker systems. They’ve added the Pure-Fi Mobile (for mobile device capable of audio playback via Bluetooth), the 79.99 (99.99 US Dollars) tagged Pure-Fi Express Plus – a small boombox with remote control, for all current and recent iPod models, and the Pure-Fi Anytime (99.99 Euros/US Dollars) which is essentially a radio alarm clock able to host an iPod or iPhone.

Before we slowly say goodbye to Paris, let’s return to Algam Multimedia for another glimpse into the realm of music, sound and high fidelity: prominently placed at the entrance to the Apple Expo show floor, Algam demoed the Arturia Factory Experience and KORG’s new “nanoSERIES” of USB-MIDI controllers: 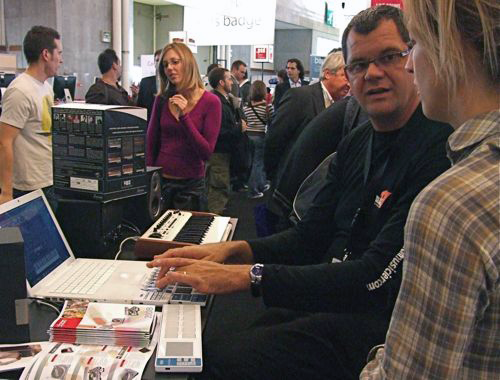 The Arturia Factory Experience is marketed as “The First Hybrid Synthesizer”. Basically, this 299.00 Euros (349.00 USD) package consists of a high quality hardware controller and a software synthesizer complete with 3500 sounds (selected from the Arturia Classic Synths: minimoog V, Moog Modular V, CS-80V, ARP 2600 V, Prophet V, Prophet VS and Jupiter-8V). Should you rather want to use the legendary sounds with your own hardware, Arturia also showcased their “VCollection” pack of above seven software synthesizers, available for 499.00 Euros.

Ultra-compact, lightweight, yet fairly robust to be carried around, the nanoSERIES consists of three individual units: the “nanoKEY” (58.00 Euros) is a velocity-sensitive, 25-notes, MIDI controller keyboard, “nanoKONTROL” (70.00 Euros) has nine faders and knobs, 18 switches and offers 4 programmable scenes for up to a whopping 168 MIDI CC messages and MIDI notes using the switches. The six transport buttons can also be freely configured to control your music software. KORG offers their “KORG KONTROL Editor” software as a free download for use with the nanoKONTROL. Finally, and looking somewhat like the lower section of the company’s padKONTROL, the new “nanoPAD” (also at 70.00 Euros) is a fully programmable pad controller with 12 pads and an X-Y controller trackpad. All three nanoSERIES products come with a full set of bundled software including full licenses for either M1-LE, Ableton Lite Korg Edition or EZ Drummer Korg Edition.

But, the most visible pieces on the Algam stand were their Vinyl-to-Digital turntables. Their new top-of-the-line LP2CD HiFi player can either hooked up to your home theatre or audio studio, or you can use the built-in CD recorder to directly convert vinyl disk audio to digital CD media. Featured in our picture below is the 199.00 Euros LPDOCK, which comes bundled with Audacity, EZ Vinyl Converter 2 (Windows-only) and EZ Audio converter (Mac-only). The LPDOCK is equipped with an iPod dock as well as a USB port transfers your good ol’ vinyl records to either your iPod/iPhone or Mac: 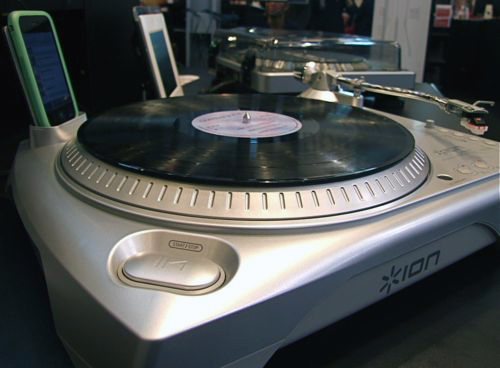 This is yet another Apple Expo premiere: the Focal XS, according to its manufacturer designed to deliver â€œfull multimedia soundâ€, is an elegant high performance 2.1 speaker set with an integrated USB sound card and iPod dock: 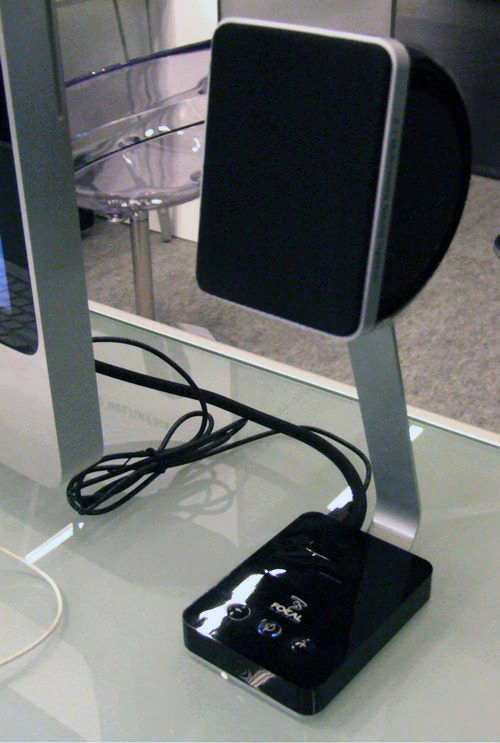 The Focal XS is one of the rarer iPod/iPhone compatible audio subsystems which actually allow not only playback but also charge, and synchronization with their docking electronics. And the XS comes with a tiny remote control which is magnetized so that it will attach to either of the satellite speakers: 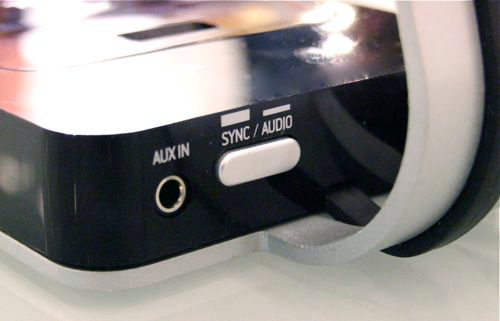 More importantly though, the Focal XS produces a really impressive audio experience with a clarity and dynamics you could only guess with all the background noise of the Expo. 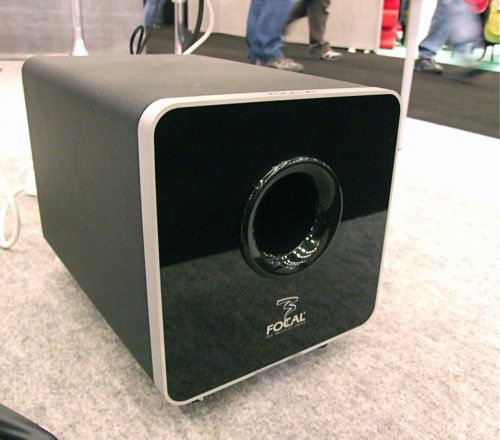 Manufacturer Focal-JMlab are known for producing professional-grade audio monitors and high-end loudspeakers – as well as a broad range of quality consumer systems for home and car audio. The company has more than two decades of experience and claims to be the French market leader in their segment.