If youâ€™re interested in playing a game of poker anytime you want, then mosey on over to http://www.candywriter.com/ and check out Kevin Oâ€™Neilâ€™s Imagine Poker and try your hand (couldnâ€™t resist a little pun here) at taking on Kevinâ€™s artificial intelligence system that learns about you and others as you play in the game.

Imagine Poker is Kevin Oâ€™Neilâ€™s configurable â€œTexas Hold ‘Emâ€ game that allows you to play in a poker tournament against 16 characters plucked from amongst history, legend, fantasy, and even fairy tales. Youâ€™ll find yourself playing against the likes of the Abominable Snowman, Julius Caesar, Little Red Riding Hood, Merlin the Wizard, Abraham Lincoln, the Mona Lisa, Napoleon, Blackbeard, Cleopatra, Dracula, Joseph Stalin, Neptune, Rendlesham the Alien, Robin Hood, the Tooth Fairy, and even the Wicked Witch.

Kevinâ€™s Imagine Poker provides you with a series of colorful, emotionally animated characters with an underlying artificial intelligence system that allows each of these computer â€œplayersâ€ to learn about you and the other players as your poker game proceeds.
Imagine Pokerâ€™s characters smile, blink, get angry, and even cry. By utilizing over a dozen attributes unique to each character, Kevin brings these figures to life. The fun of Imagine Poker begins when you try to win the tournament from these AI players. To win, you have to beat them all! 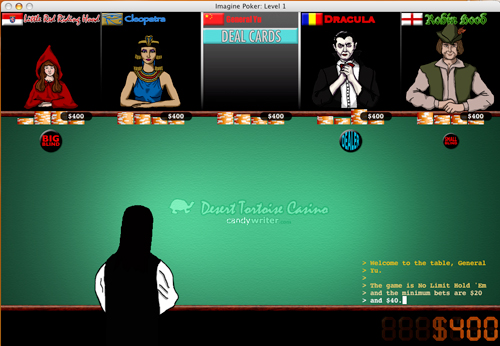 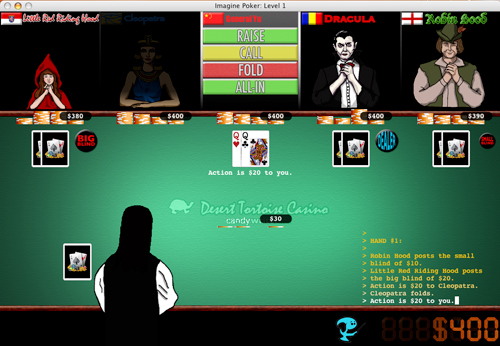 Imagine Poker lets you choose your â€œTexas Hold ‘Emâ€ tournament from among Limit, Pot Limit, and No Limit settings, and you can also manipulate the blind bets as you want to. You can also control the sound effects, the style of deck you use, speech commentary, the game speed, and much more. If you want to just play your own game or if you want to just speed things up, you just simply turn on the “Fast-Forward” option and the game will jump to the next hand every time you fold.

In the fall of 2006, Kevin added â€œPoker Ghost,â€ originally designed as an online assistant when you played for money, to Imagine Poker. Now as you play, you can click on the ghost at any time and find out how your hand stands mathematically. 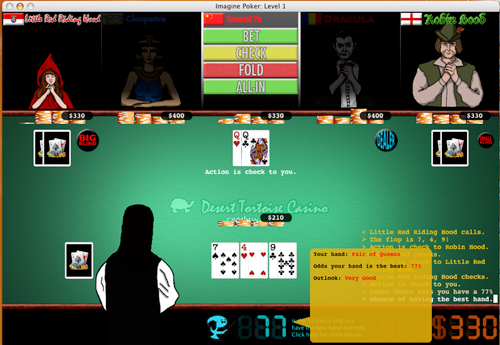 Now I took on the AI under the guise of General Yu, and for a first time playing against the computer, I didnâ€™t do that badâ€¦ I won! 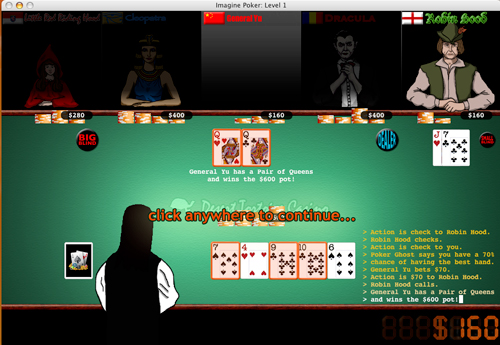 Why donâ€™t you take the time to check out Imagine Poker v. 2.0.1 right now? Itâ€™s designed to let you play Level 1 as part of the free trial but to reach the other levels, youâ€™ll need to pay the $19.95 registration fee. That registration fee provides you with a lifetime access to the game and to any future versions that Kevin may develop. Not bad for the price, huh?

To longtime My Mac readers, the name Oâ€™Neil may ring a bell. Thatâ€™s because Kevinâ€™s dad was Mick Oâ€™Neil, a MyMac.com writer from 1997 until his untimely passing in 2001. (Check out Mickâ€™s work at https://www.mymac.com/userinfo.php?id=Mick%20O%20Neil)

I took the time to chat with Kevin regarding Imagine Poker, Candywriter and the future. Continue on to read the responses from a very talented and gifted individualâ€¦

Kevin, welcome to My Mac!

Q- Who or what has had the most influence upon you and your work with the Mac platform?

Without question, my father, Mick Oâ€™Neil, had the most influence on my interest in the Mac platform. My father was an Apple-advocate and Mac journalist/educator for over twenty years. Thanks to him, I grew up on the Apple ][ and the MacPlus. He taught me the basics of Pascal at the age of seven.

Q- There is always a lot of commentary about the sorry state of Mac gaming and the lack of interest by Apple in improving the gaming side to attract more users. Your comments or thoughts?

Since the release of the Intel Mac and subsequent MS Windows-running tools like Boot Camp, Mac gaming has never been healthier. As Mac slowly claims more ground in the personal computer market, developers continue to build more gaming titles specific to the Mac.

John Hodgmanâ€™s nerdy personification of the PC in the â€œGet a Macâ€ commercials is tied to an obsession with spreadsheets and pie charts. However, it would seem to me that the obliviousness of his character also fittingly represents the PC-gaming faithful. After all, about the only thing that is funnier than a Windows-using square is a zitty Windows-using gamer, clad in a wrist brace, and clamoring away in a dingy basement amid empty cans of energy drinks.

Mac users have historically demanded a little more creativity from the games that grace their platform. Cranially-intensive games like the 1986 title, â€œUninvited,â€ and the 1987 release, â€œThe Foolâ€™s Errand,â€ both made their debuts on the Mac. â€œSimCityâ€ appeared on the Mac before it was ever ported to MS-DOS.

Creativity still abounds in the world of Mac gaming. Candywriter was formed to fit just that bill and to fulfill the idea that intelligent game design can, at least for savvy Mac users, outweigh millions of dollars worth of 3D graphics.

That said, and with the advent of Windows-running capability on the new x86-based Macs, gaming fans of all genres can for the first time embrace a single machine as a hub for creative projects, â€œboringâ€ work, and scintillating game play alike.

Q- Why Poker? Why not a more intense â€œactionâ€ game that seems to attract a larger audience?

Action games are a dime a dozen these days. To create a cutting edge action title that stands apart from the crowd would demand a huge investment in time and development expense.

On the other hand, Solitaire has remained a personal computer stalwart since the first days of the graphical user interface (GUI).

With the interest in Texas Hold â€˜Em poker soaring, and given the distinct lack of competent poker titles available, the niche beckoned. In October, Congress passed the UIGEA law to shut the door on online gambling across the US. I wanted to build an artificially intelligent offline game that could keep poker on the Mac fun for the millions of displaced online players.

Q- How much interest have you had in porting Imagine Poker to the Windows side?

I ported Imagine Poker to the PC after its initial release on the Mac. My observation is that it is a lot harder to break into the Windows shareware market. On the Mac side, Iâ€™ve received enthusiastic support from Apple as well as sites that cater proudly to Mac-only titles (MacUpdate.Com, MacGameFiles.Com, CoolOSXApps.Net, MacZOT.Com, etc.).

I havenâ€™t yet afforded enough time to really figure it out, but it appears that the main barrier to entry on the PC side is simply the general saturation of the gaming market.

Q- How big is Candywriter?

Candywriter consists of one Seattle-based Mac developer (myself), graphic artists in San Diego and Shanghai, and a slew of beta testing, Mac-enthusiast visionaries from across the globe.

Q- What would you really like to do if you had all the necessary resources and time?

As far as software projects go, Iâ€™d like to rewrite the original Apple ][ Wolfenstein for OS X. There is also a version of Tetris for the Nintendo 64 that Iâ€™d like to see on the Mac. However, there is not a lot of creative initiative to be had in rewriting something from the past so its unlikely those projects will see the light of day.

What Iâ€™d really like to do is get into electronic music production on the Mac.

Q- Whatâ€™s next for you and Candywriter?

Iâ€™m currently at work on a revamped version of the freeware blackjack game, Blackjack International. After that, I have a few other projects on the drawing board. With a little creative inspiration, a few good artists, and some time, anything is possible!

Thanks Kevinâ€¦ and the very best in everything that you do! Weâ€™ll check back with you to see how things are going with you and Candywriterâ€¦.