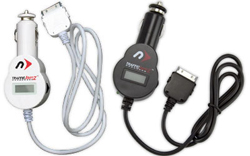 I think it was the middle of year that I was searching for a wireless FM transmitter to use with my iPod Mini. If I remember correctly, I went through half a dozen before I found one that I liked and thought it worked well enough for me. I’ve mentioned before that I am no audiophile, but I do listen to quite a few podcasts and audiobooks, and switch to music when I tire of the spoken word.

Each FM transmitter I tried had a different problem. Some were difficult to program, or did not cover all of the frequencies on the FM dial. Some broadcast so weak a signal, that I was constantly moving the thing around, or switching stations (not advisable) to try and keep a connection. Others that had an LCD did not illuminate, which meant changing the station at night was impossible. One did not have an LCD and only two frequencies were available. One or two also distorted the spoken word or the music so badly that each “s” sound made me think I had a snake in the back seat.

So it is with some trepidation that I try Newer Tech’s TrafficJamZ (TZ).

First things first: If you’ve never used a wireless FM transmitter for your iPod, they are simply a tuner that you plug into any iPod (that comes with a dock connector) so you can listen to your iPod on your automobile’s FM radio. You need to find an unused frequency band, or one that is close to being out of range. Then it’s simply a matter of tuning the transmitter to the same frequency, just like your car radio. They usually plug into an auto’s power port, or cigarette lighter.

Note: I live in a rural area, but travel every day to a small city. Larger cities may make your tuner tougher to program due to the abundance of radio stations. Usually, if you can find a station that is even a little weak in these areas, a tuner in your car can overpower the station. It is hit and miss.

The TZ comes with an illuminated LCD, a spring loaded dial-type button on the side and about 27” of wire. There is a red LED on the top of the unit so you know when it’s powered up. The wire was plenty long enough so I could lay my iPod in the console or on the seat, or someone could hold the iPod sitting next to me. You must have an iPod with a dock connector.

I set my car radio to a station that just played static, dialed up the same frequency on the TZ, unplugged it from the cigarette lighter and plugged in back into the power port. The TZ remembers the last station you tuned in. Plugged the other end into my iPod and fired it up and music immediately flowed from my car speakers.

I’ve found that the quality of the sound you get from these tuners is highly dependent on the station you tuned in, your local geography, and pixie dust. What works for one may not work for another person.

I’ve used the unit for about ten days now and I like it. The sound from the TZ is pretty good, and I especially like the way it recharges my iPod. It’s also been very convenient to move the unit between my car and my wife’s car.

To sum this up:
Pretty good sound-Depends on the topography in your area
Charges iPod while playing (Nice feature)
Ability to store four favorite frequencies
Works with 1st Generation nano, mini, and all 3rd, 4th and 5th Generation iPods that use a Dock Connector port
Output frequency: From 88.1 to 107.9Mhz
Dock connector cable length: 27 inches
One-year warranty