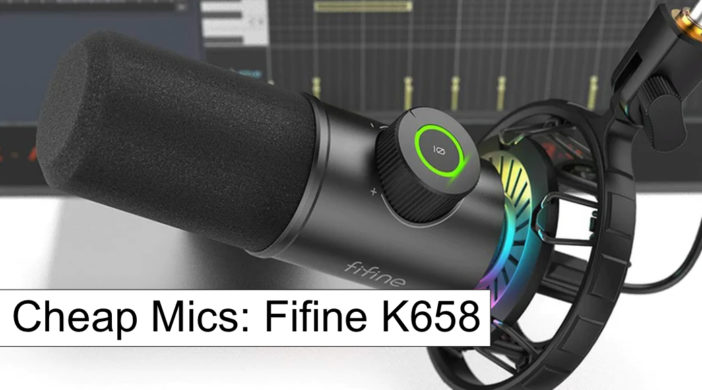 Microphone tested on an M1 Mac Mini with Hindenburg DAW and GarageBand.

Link to product from Amazon

This is the second microphone I’ve tested from Fifine, the first being the K683A condenser from a few weeks ago and if I had my druthers? I like the K658 more for a variety of reasons, the first being that as a dynamic microphone the background noise is greatly diminished at the same gain level. It also has a cardioid polar pattern so the off axis (from the sides or behind) rejection of sound is pretty good. In fact, as compared to most condensers, it’s excellent. More on that in a bit.

First a few words and numbers:

The frequency response chart is odd to say the least. The low end is pretty flat until about 1 kHZ then it rises sharply to over 10db with a big dip around 7 kHZ probably to reduce sibilance. At 8 kHZ it begins dropping sharply across the rest of its range. With such a big boost in the mid and high range, it sounds very bright (especially for a dynamic) which might be a good thing for some, especially if you already have a deeper voice. With spoken word, every utterance comes across clear instead of being muddy as some dynamics with flatter response might sound. It could come across as too sibilant with higher vocal ranges, so if your voice is naturally high pitched, you may want to try one before making it your everyday microphone.

Unlike most condenser microphone which are what’s called side address (speaking into the side of the microphone where it will be most sensitive), the K658 is an end address (where the most sensitive part is the top end of the element) microphone with the element surrounded by a honeycombed metal enclosure to help reduce background noise. Background noise reduction on a reasonably inexpensive USB microphone is pretty good. If you’re not in an acoustically treated room (as nearly all of us are not), the side and rear rejection of the K658 is well done.

What else comes with the K658 microphone? The usual of good and bad for cheap mics. There’s the near useless metal desktop tripod stand, though in this case it may be a little less useless as (depending on the height of your desk) being an end address microphone you may find the height of the capsule acceptable enough to use, though I still would recommend a higher desktop mount or boom arm for better placement. The stand attaches via a shock mount which seeing how it’s included is pretty good. There’s also a USB-C (which attaches to the microphone) to USB-A cable (computer side). While I appreciate that the microphone attaches with USB-C, I would have preferred the option to have the computer end be the same as the K683A which was a split USB-A/USB-C cable.

To use the K658 is simple. Push the microphone end though the shock mount and use the included screw in plastic sleeve to attach it. Now attach the shock mount to the desktop stand (or boom if you have one of those). Plug in your wired headphones to the 1/8-inch/3.5mm output on the bottom next to the USB-C output. Then plug in the USB-C cable to the microphone end and the USB-A cable into your computer. Make any necessary adjustments to your computer’s sound preferences (the microphone is compatible with both Macs and Windows PCs), adjust the gain with the ridiculously large Green accented LED knob and you’re off.

Oh, did I forget to mention the lights? The microphone gain knob has an always on green LED strip that runs through it. No you CAN’T turn it off. However it isn’t all that awful since it also doubles as a mute switch. Unlike like some other microphones, the mute switch for the K658 is touch sensitive so as long as you have a light touch, utterly silent when engaged. The green LED changes to red when mute is activated and it’s glaringly obvious so not much chance of accidently engaging it.

The other “feature” is Red/Green/Blue (RGB) lights at the back end of the mic. No it isn’t there to help you find that USB-C port or microphone headphone output, it’s just decorative and there’s no adjusting it other than on or off vis a touch sensitive switch on the opposite side of the gain knob. It’s something you either like or don’t. I’m not a huge fan, so I appreciate that you can turn it off.

I’m including an audio sample with some typical experiences that you might have recording with this microphone. It’s recorded directly into GarageBand with no filters or effects with the gain on the microphone set at about 12 o’clock. It’s output as an MP3 file, 24-bit at a 128 kBit sample rate.

WOW! Those plosives were not great regardless of whether the pop filter was screwed on or not. Microphone technique of speaking across the microphone (plosives test 3) yielded much better results. So final results? For $80 you get a pretty good dynamic microphone with decent side and rear noise rejection. The plosives were not a highlight, so if you choose this mic, make sure your technique is adjusted to remove the worst of it. The RGB lights are neither a positive or negative for me but you might like them. The pickings for USB Dynamic microphones is pretty slim in this range with the Audio Technica AT2005USB and the Samson Q2U in the $60-70 range. Both of those however include XLR connectivity if you decide to upgrade, but neither come with a shock mount or RGB lights.