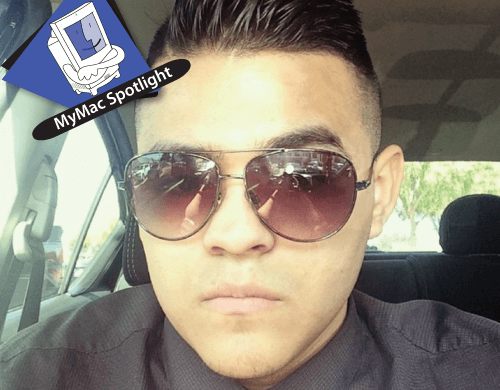 Who are the people behind the technology that we love so much? We know the products, the websites, the online personalities but we want to learn more!

Every week here at MyMac.com, we will spotlight a company, developer or person that supports Apple users by creating solutions or entertainment for the Mac, iPhone, iPad, Apple Watch, Apple TV and other platforms we all use and love by asking them to answer seven questions.

I started back in the spring of 2014 when I noticed how much money people were making from iOS apps. I wanted to bring in some extra money so I bought a book to learn Objective-C and an iMac in order to make apps. I released my first app called Smartwrite in December of 2015 and now it gets over 600 downloads a week. The app wasn’t as good as I wanted it to be, but when Apple released Swift, I stopped working on the app. I didn’t have much free time with school and work but I wanted to learn. I bought a book to make iOS games with SpriteKit, Apple’s 2D game library. It took me over 5 months to develop Chomp’d in 2015 and when I released the game, and now I bought a book called Hacking With Swift to learn actual app development besides games which is now what I do on my free time.

The 21.5 inch iMac from mid 2010. I bought it from someone on Craigslist in 2014. It’s the computer I do all of my iOS and HTML development in it and everything else.

My most recent project is a game called Chomp’d that is available in the App Store for both iPhone and iPad. This game was released in December of 2015 and I’ve been told by players  that it’s addicting and fun to play. It’s a simple but yet difficult survival game. In the game, the user has to keep their finger on the screen as long as possible without letting any of the fish touch their finger, not even the purple fish that follows their finger around. The longer players last, the harder it gets. There are over 20 species of fish and the max score in which no new fish appear is 300. I’m working on an update to make the game look more appealing so I can start advertising it on Facebook.

For my next project, I’m trying to release an update for my first app Smartwrite since I stopped supporting it in 2014 since I switched to Swift from Objective-C.

I got my first job when I was 17. I used to be a graphic designer for my dad’s clubs advertising bands and creating the posters. The owner of the print shop saw my work and hired me as a graphic designer. I worked there for a couple of months after school but soon quit when I graduated from high school.

If you’re thinking about working with technology, start now, not later. One of the biggest things I regret when I first started learning iOS development in 2014 was that I would’ve wish I started when I was younger. I was 21 at the time and was the first time I started programming. I read about other people’s stories and they say that they started back when they were 15 or even 12 years old. That’s who I wish I was. If you start early, you will have a huge advantage in the future. Look around online for free courses and even check out some books  from the library. This Chinese proverb relates to this, “The best time to plant a tree was 20 years ago, the second best time is now.” If you don’t start early, you will regret it years from now.

I got my inspiration from people who became successful from iOS apps such as Allen Wong, Nick D’Aloisio, and the creator of Flappy Bird. Allen Wong grew up in a poor family and decided to make iOS apps to provide for them. He learned Objetive-C and released an app that was basically a police radio scanner. After a couple of months, Allen Wong became a millionaire selling the app for about $2.99. I always think that someone like that could always be me because we both work hard. We both code all the time and learn whenever we can.

Nick D’Alosio is a reason why I wish I started programming young. He started programming when he was 12 years old and at 15, he released an app called Summly which took online news articles and made them into summaries. Nick got funding from some celebrities and even billionaire Li Ka-shing after his app became popular and soon sold it to Yahoo for $30 million in about 4 months.

I don’t hope to become like Nick, because what I want is for my apps to become successful but I want to be the owner of them. I want to start an iOS development company managed by me on my free time that makes games and other apps. That’s what I’m hoping to get to.