If you are looking for a game with a difference on iOS then Fuego’s River Adventure may just the solution.

There are no pesky onscreen controls to deal with. So how do you play this game? 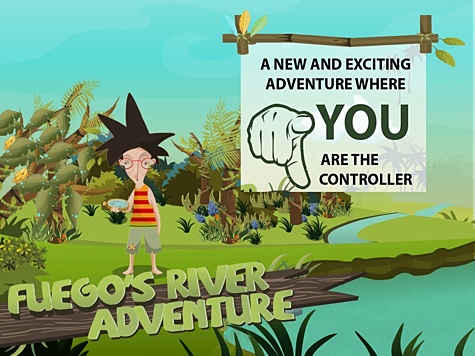 Like the Xbox Kinect, the game utilizes the in-built camera in the iPad 2. The camera picks up your body movements in order to interact with the game and control Fuego.

You assume the role of Fuego, who becomes stranded in an exotic location after disaster strikes his plane and he is forced to parachute to safety. Not to be deterred by the jungle and imposing wildlife, Fuego sets out to build a raft and ride the river to safety.

There is a problem! The river is laden with Alligators, tree trunks, and other obstacles intent on preventing Fuego from reaching safety.

You will guide Fuego through 20 levels whilst avoiding these obstacles and picking up fruit and coins on the way. The basic premise is to achieve the highest score in each subsequent level. It is imperative you collect fruit and coins whilst avoiding enemies. If you don’t collect enough you will quickly lose and have to restart the level again. Levels are relatively short but with an increasing pace of oncoming opponents you will undoubtedly spend countless hours traversing the levels. 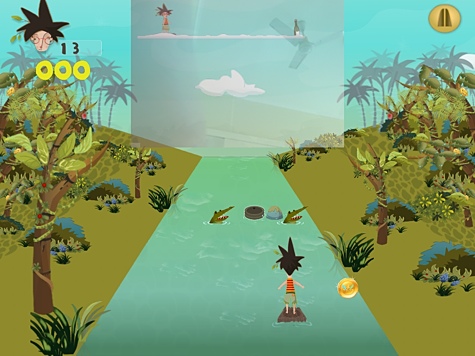 Despite the quantity of levels the same environments are presented throughout the game. It doesn’t get boring as the obstacles in Fuego’s way will randomly change upon each subsequent playback. This offers a fantastic challenge and encourages gamers to return to the game.

The audio whilst repetitive is clear and loud and does not distract from the gameplay.

The graphics are vibrant and are well rendered either closeup or from afar. The top third of the screen is dedicated to a pause menu, current points tally, current level indicator, progress bar, and a video box that will show your current position as seen via the in-built camera.

The one annoyance is each time you lose or complete a level you will need to move forward to the iPad 2 and select the Retry or the Next level button. An automatic continuation option that could be set to about five seconds, after failing or succeeding, would also be a welcome addition.

An additional level is available for free when you “like” the game on Facebook. Facebook integration also allows gamers to announce their high scores on the social network as well as publish hilarious candid photographs of themselves whilst playing the game.

Throughout each level three photographs will be taken as you are actively playing the game. They can offer some seriously funny candid shots and besides posting to Facebook you can also email them to family and friends. In this version you are currently unable to export the photographs to your camera roll. 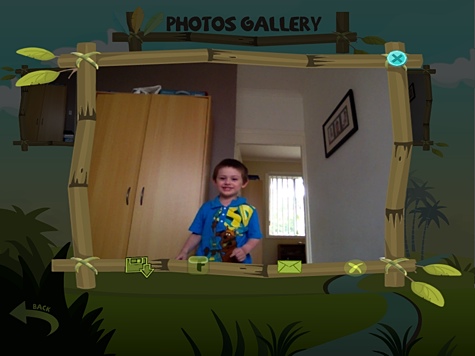 The developer has also optimized the game to be used with the iPad 2 Smart Covers. The game will always lock into the horizontal orientation with the volume keys at the top and the camera on the left hand side. Despite the camera being off center and angled whilst connected to the smart cover, I did not need to make any adjustments to the angle of the device.

For true accuracy you will need to be four to five feet away from your iPad 2 with enough space to move frantically from side to side. You will be presented notification messages if you go outside of the cameras range or if you are too close to the iPad 2.

Fuego’s River Adventure is nothing short of an amazing accomplishment for the developer.

It does have its faults such as limited levels, no camera roll export, limited social networking options, and the requirement for the user to manually progress the game. Some users can forgive these misgivings as it is a version one release and the first of its kind on iOS.

If in doubt the developer has also released a free version of Fuego’s River Adventure to trial before purchase.

The game is addictive and fun. Your body will grow tired of the constant movements well before your interest in this game fades.

Therefore, I am awarding this iPad 2 game a MyMac.com review rating of 7 out of a possible 10.