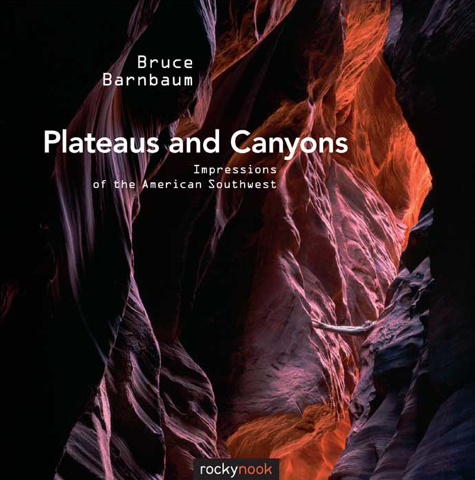 The Colorado Plateau, where Bruce Barnbaum made many photos over a period of roughly 30 years, is a place where water, silt, wind, and time have created a landscape of swirling sandstone cliffs, nearly impenetrable slot canyons, and a vast expanse of sage colored hills. People in the Western United States know the area as the Four Corners region because it’s the place where Arizona, Utah, New Mexico, and Colorado meet.

Photography enthusiasts know Barnbaum mainly for his artistic black and white pictures. This is his first published book of color images, most of them shot with film. These photos, technically superior though they may be, revisit terrain that has been well traveled by photographers and artists since the turn of the 20th century.

The author occupies his own constellation, ignoring such noteworthy antecedents on the Colorado Plateau as Ansel Adams, Phillip Hyde, and Tad Nichols, to name just a few. He laments the flooding of Glenn Canyon to create Lake Powell, but ignores the evidence of the tragedy that you can see in the black and white photos Nichols made of the canyon before Lake Powell existed.

It seems ungenerous at best for Barnbaum not to acknowledge the work of any of his contemporaries, among them Jerry Jacka, Jack Dykinga, and Gary Ladd, professionals whose work has appeared in Arizona Highways Magazine and National Geographic for many years. Their work, for my money, is often superior to much of what you’ll find in this author’s retrospective.

Barnbaum’s mission, detailed in the book’s final pages, seems to be to portray himself as the ingredient that was responsible, significantly so, for the great waves of tourists that now flock annually to the Colorado Plateau. Though the first wave of tourists arrived in this terrain after the railroad reached Flagstaff, about 75 miles east of the South Rim of Grand Canyon, in 1882, Barnbaum still feels angst about what he perceives as his own role in encouraging tourism by publishing his photos. I suspect the railroad and the Fred Harvey Houses had a lot more to do with that tourism than Barnbaum’s images.

Much of the Plateau country remains difficult to reach and free of tourists. The best places are still only accessible on foot or horseback, or via two lane paved roads or a couple of slick ruts in red dirt.

Barnbaum started shooting these images in the early 1970s, at the point when the first huge waves of population and tourist growth were coming ashore in Arizona. Today, while apologizing for his contribution to the popularity of the region (some 40 million visitors a year pass through it), he also laments the growing entrepreneurship and changes in tribal politics that have closed some areas and turned others into gold mines for unscrupulous hawkers. It’s hard to imagine why it’s acceptable for Barnbaum to make a living off the region and not okay for the Native Americans, who have precious few alternatives, to do the same thing.

Photographers will appreciate the exposure data the author lists in the appendix. The epilogue will also be of interest to some readers, though historians and anthropologists will be amused, to put it mildly, to hear the author obliquely portray himself as a pioneer in this region without so much as a nod to all the shooters who preceded him in the same terrain and produced stunning results.

If Barnbaum was the kind of photographer whose work was original enough to break new ground, he might be forgiven this lack of generosity. Some of the images in this collection, however, are the work of a good amateur, while the subjects themselves are often little more than cliches to those of us familiar with the area.

Another MyMac reviewer also has a copy of Plateaus and Canyons. He adds: “I live too far away from that region to know its history like Sam does.Â As a personal comment, I’d like to add that for an outsider like me, the pictures are great and worth looking at especially if we do not expect to get there anytime soon. Is there a better book for this? Maybe, but as of now I do not know any!”

Reviewer Sam Negri replies: “He’ s right. I’ve spent a part of almost every year over the last 40 years somewhere on the plateau. And I’ve had many opportunities to study and write about it.”