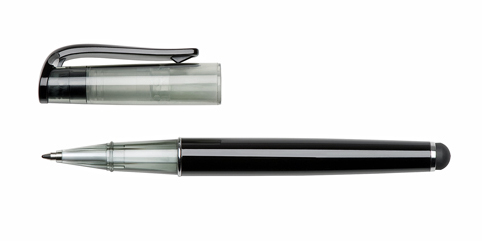 The ease of use of touch screens on iPhones, iPads and other similar products that utilize capacitive materials that allow the user to simply touch the screen to make changes or allow input have really changed the communications landscape in the past several years. Yet, there are still limitations that occur, especially when it is cold outside and the user is wearing gloves or other instances where, for whatever reason, that “human” capacitive touch is not occurring.

Yes, you can take the glove off but what normally occurs is that you usually wind up having to call the party back as you just weren’t fast enough to touch the screen in time. A solution to the problem was the use of a stylus but most users have a tendency to avoid such a tool. And besides, how many times have you found yourself in need of a pen and, of course, there’s never one available when you need it. Kensington has answered the problem by providing users with a stylus that combines that stylus use with a ballpoint pen, permitting two functions in one neat package.

I have been using the Virtuoso for quite a while at work and when I’m out and about, running errands or doing whatever needs to get done. Slip it in a shirt pocket or whereever and go. The nice part of the setup of the Virtuoso is that if you need to utilize the stylus immediately, it is readily available and, just as with any other pen, take off the top of the pen and you’re ready to write. I have not had any problems with the Virtuoso at all; the cap sits snuggly on the pen, top or bottom, and it works just as well with the iPhone or the iPad. The Virtuoso is comfortable in the hand and easy to use, either as a pen or a stylus.

The Virtuoso Metro takes a standard Parker Inkjet refill that you can easily find either online or at Office Depot, Staples or similar stores. So, if you are considering the purchase of a stylus for your iPhone/iPad, check out Kensington’s Virtuoso Stylus and PenÂ where, for a reasonable price, you get both pen and stylus, more bang for your buck. . Check it out.

All in all, I give the Virtuoso Metro Stylus & Pen a My Mac rating of 8 out of a possible 10.