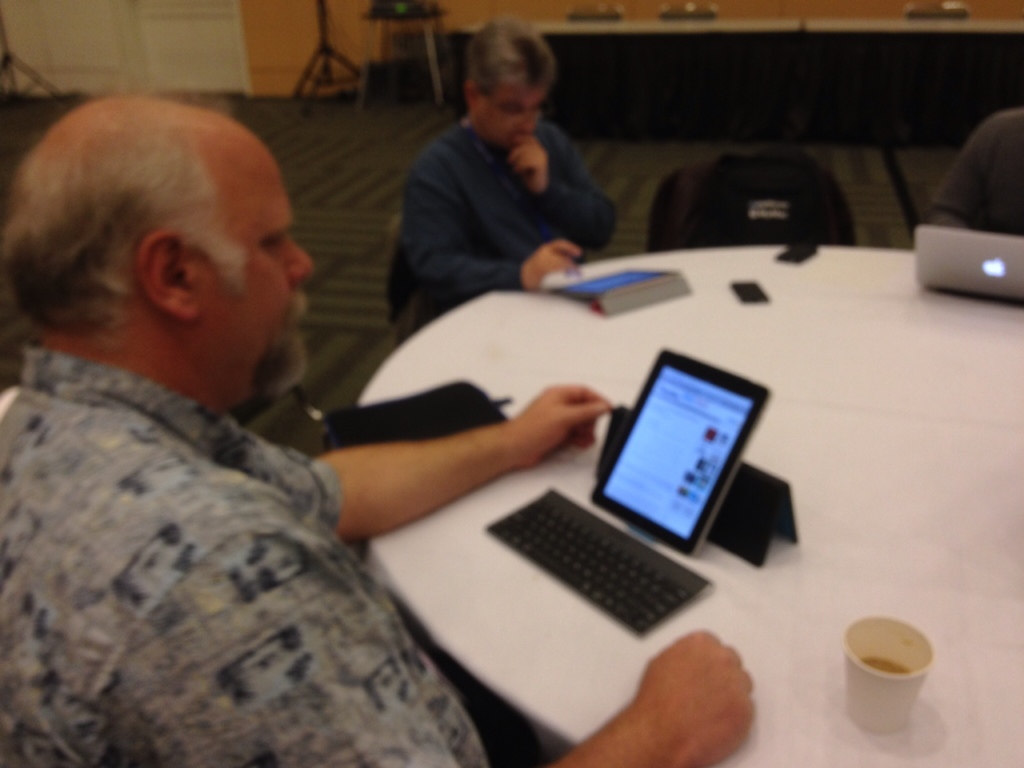 It’s the last day of the Macworld/ iWorld Expo and I feel like I owe you website readers an apology. I haven’t written much this trip and while I have a pretty good reason for it, it still doesn’t feel right. This was the “Take as little as possible to the Expo with just iOS devices to do everything I needed to” experiment.

I spent a lot of time this Expo refining the processes and that has taken away from being able to write and do some of the other things I usually do while here. I have managed to (mostly) do what I set out to do, but it isn’t as easy as when I had my laptop.

For pictures I used my iPhone. I would then either connect the phone to my iPad and transfer them that way or use DropBox. The hard part was getting them to the MyMac site to use in posts and it required DropBox to do so. Once the pictures were in DropBox, I could copy the url and then use Safari to get to the MyMac WordPress editor and upload them. Once they had been uploaded, I could then drop them into any post I created. This is actually the hardest and most time consuming part of anything else I’ve tried to do with just iOS at the Expo.

Side note: The last day of the Expo, Tim showed me a $4.99 app called Blogsy that made posting pictures embedded in the post so easy that I’m kicking myself for not finding it before.

Audio took a little more effort and the fact that my microphone was such a piece of garbage didn’t make it any easier though the iOS program I used TwistedWave ($9.99 Â Software) certainly tried their best by included audio editing features. I ended up buying an iRig microphone by IKMultimedia ($59.99) but I don’t think I’m using it correctly because my audio quality didn’t improve. I wish the Expo was still four days since that might have allowed me the time to get it all right.

Once the audio was recorded, I can right from TwsitedWave, upload it to DropBox and then download it to my iPad via the same program. I can then copy audio files (such as any interviews I did) and paste them into a single document. That’s how I created the MyMac Podcast 386 (and I apologize for the horrible way it sounded. It was not the fault of any iOS hardware or software I used). Once the audio project was completed, I uploaded it back to DropBox where Tim could snag it and post it.

Video in most ways oddly enough is even even easier than audio. Shoot it with the iPhone 4S, transfer it to my iPad with Apple’s Connection kit via USB and 30-pin connector and then transfer it to YouTube (though I could easily just as well do it from my iPhone, the longer battery life on the iPad made it a better choice as well as freeing up my iPhone for other things). Once on YouTube, just use the embed code for the video and post it directly to the site.

I’d say on the whole the experiment was a success. Not based so much on volume or quality of the content created, but that I managed to do everything I needed to do or would have used my laptop for on iOS devices and software. I will try this again next year and I think between various upgrades to iOS hardware and software, it will all work even better.