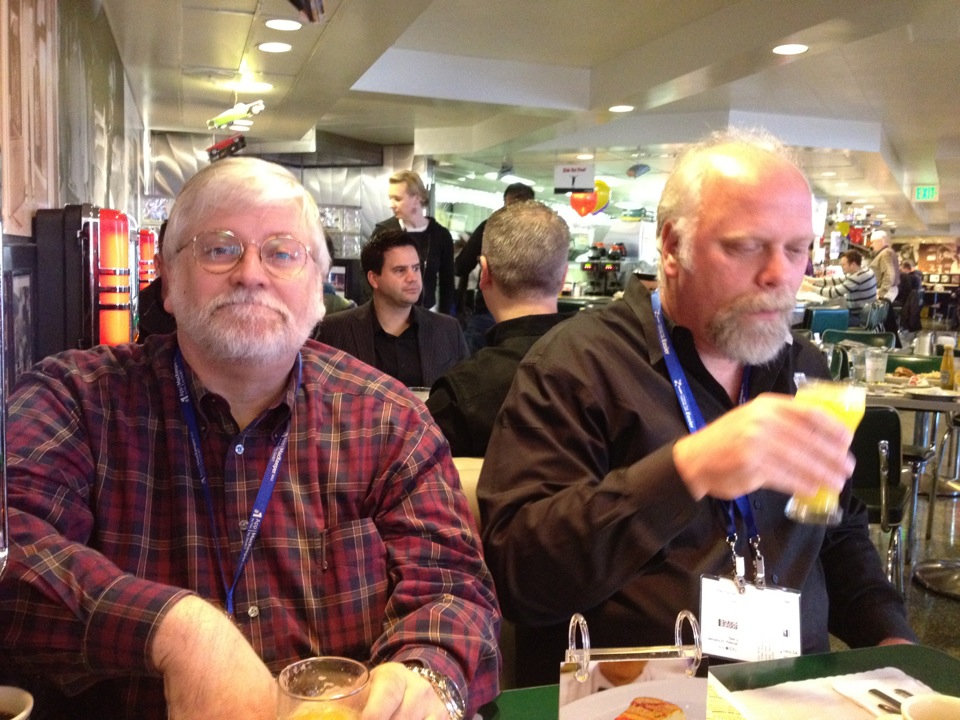 Once again, Tim, Guy, Tom, and I trudged down to MyMac.com Central (yeah, Melâ€™sâ€¦) for another tasty breakfast. We were joined by Owen Rubin, who, having worked in this industry for as long as he has, had some interesting comments about the show and the state of the high tech industry (I will let Owen comment in his own blog).

First, the press corps was taken care of quite well. Kudos to IDG’s Paul Kent and his staff. The WiFi in the media room was excellent, but there was perhaps another reason it worked so well: the numbers of members of the media was much lower than previous years. The room was bigger than past events I have attended, but there were far fewer people, other than the Wednesday evening press gathering, where the thundering herds descended upon the tables of free food, and of course, the free top-shelf booze. For the rest of the show, the media room was virtually empty, and I have some theories on that, too. First, itâ€™s still a lousy economy and the print media is hurting terribly. CES just closed, and most media outlets just couldnâ€™t afford to send folks to cover both events. Even in blogland, which added an interesting flavor to the media room in previous years, was much reduced over my recollections of the 2007 and 2008 Macworld Expos. There are probably a lot of bloggers who are unemployed or at least underemployed, hence could not afford to come. For this reason, there was far less coverage of the show among the blog sites. MyMac.com was able to put together a tremendous team of nine people who came in from all over the country to cover the show. Expect more reports over the next few days, and many product reviews over the next few months.

I have mixed feelings about the show floor. On one hand, it looked like there were huge crowds on all three days the show floor was open. On the other hand, the exhibition hall was much smaller than the ones previously used in Moscone North and Moscone South. I noticed a lot of gray hair (including my own, I wish to disclaim) on Thursday in particular, and at the parties. This could easily be because us fiftysomethings may have a little more spare cash to permit making a trip like this, and the spare time. The crowd turned much younger on Saturday when school was out. There were a goodly number of suppliers, and the special (and affordable) small kiosks made it possible for the smaller developers to have a presence at a big showâ€”a major plus. I think another thing about this show that maybe made it a bit disappointing, is that there was no one (or two) big, blockbuster product announcementsâ€”something to draw everyone in. The iPhone launch at the Macworld Expo in 2007 was probably the best-attended Expo of all time. Reason being, there was a new product that was so compelling, people had to come to gaze upon its wonderfulness, and learn more about it. There was no such major announcement at this show.

I guess the big question in many peopleâ€™s minds is how much longer can a show like this be sustained? Face itâ€”Apple is not coming back, nor is Microsoft, Adobe, and all the rest of the big companies that used to spend millions of dollars on lavish exhibits. Without them, it gets harder and harder to attract that second and third tier of real and potential exhibitors. They simply canâ€™t afford it anymore. And with fewer exhibitors, smaller numbers of attendees certainly follows.

Compounding that is the cost of exhibiting in a typical metropolitan convention center. Convention centers are designed to suck as much money out of exhibitors and attendees as possible, and are a major benefit to the local tax collector from the hall itself, as well as the hotels, restaurants, and parking concessions. Additionally, it is in the best interest of the local labor unions to forcibly stand in the way of anything that might take away even a penny from their â€œworking men.â€ Try to move some of your own equipment at one of these shows (or even screw in a lightbulb), and youâ€™ll understand. Local and state governments are so terrified that they might miss a single penny of tax revenue that they make it almost impossible for the typical exhibitor to sell items on the show floor, the paperwork requirements are so odious. Moreover, most big cities have a tourist tax on rental cars, hotels, and even restaurants in some cases, bumping up a base sales tax rate of 7 or 8 percent to 14 percent or more. Heck, theyâ€™re tourists. They can afford to travel, so letâ€™s put it to â€˜em! So sayeth the city fathers looking for additional revenue sources.

Business is hurting in the current economy, so travel from corporations, and especially media, is way down. Business has learned from this and has discovered that they donâ€™t really need to send folks to these events (or most places) anymore. Itâ€™s all on the Internet, so who needs the expense of travel? This means that another significant group of attendees are not coming to Macworld anymore.

I love this show, but more than that, I love the camaraderie, and getting together with the MyMac gang. However, the joy I feel when I meet up with the MyMac gang does not make up much of a business plan for IDG. The MyMac gang can get together anywhere, and can certainly do so at a location far cheaper than downtown San Francisco.

So, I donâ€™t know how much longer the Macworld | iWorld show can be sustained. Dwindling crowds and dwindling exhibitors do not speak well to the future of this fabulous event. When it finally goes away, I will mourn its loss, and then just as quickly, move on, or as the late Steve Jobs told one customer, â€œget over it.â€