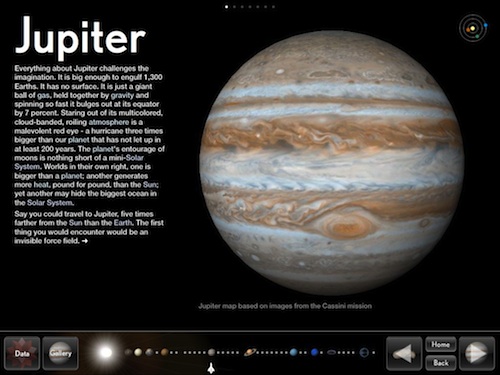 I’m nuts about anything that has to do with science. That interest stems from the fact that I’m also an Earth Science teacher and Science Department Chairman at Chenango Valley High School. I spend every working day talking about science to students from every background. To do that, you’d better have a true passion about the subject matter. After having reviewed Touch Press’s app The Elements last year, I was excited to see the release of their latest offering, Solar System for iPad, as the App of the Week on the iTunes App Store. The graphics in Solar System for iPad are just as amazing as they were with The Elements. The 842 MB installation is a testament to the level of detail that Touch Press has put into the application. Installation of the app is lengthy, so much so that I highly recommend that you install by syncing with your computer rather than directly on your iPad via the App Store application. Solar System for iPad initially opens with a song written specifically for the app. An instrumental version of the song “Biophillia” was written for the app by the Icelandic artist, BjÃ¶rk. The song is rather dramatic and is accompanied by a number of stunning astronomical images provided by a number of agencies, including NASA. You can turn off the setting to have the song play each time the app is opened if you wish. 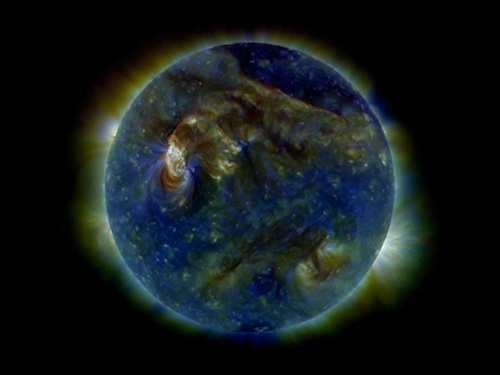 The first thing I noticed when getting to Solar System for iPad’s home screen is the level of detail in every aspect of the app. The home screen resembles an astronomical Periodic Table, with celestial bodies of the solar system replacing chemical elements. Each 3-D animated image of these objects is listed by distance from the Sun and can be touched and spun to be seen from any angle. I couldn’t help but think how great this app would be for my students to use when we begin our astronomy unit in April. Solar System for iPad puts learning back into the hands of my students where it belongs. One of my biggest challenges as a teacher is keeping students motivated to learn and put forth their best efforts. Dynamic apps such as Solar System for iPad can help to provide the ever increasing level of stimulation that seems to be needed to maintain the interest of today’s children. If you click on any of the animated celestial bodies on the home screen, you’re immediately taken to a screen with a wealth of information about the object. Let’s say you’re interested in learning more about Mars. Once on the screen dedicated to Mars, you can touch the planet and rotate it in virtually any direction. Tons of information about Mars is provided on the left side of the screen. You can also scroll to other screens with a wide variety of information about Mars and some of its more interesting features, some of which contain videos. This is true for every object that’s described in Solar System for iPad, so it would literally take hours to look at and read and watch the content that’s made available to you. 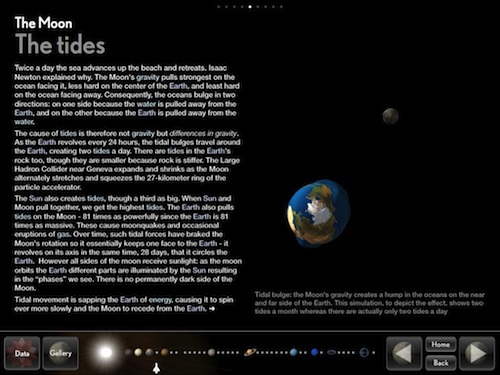 The bottom of the screen is a slider that allows you to quickly access any of the planets, moons, asteroids, or orbiting objects in the Solar System. The pointer looks like the outline of the Space Shuttle, a subtle touch that shows TouchPress paid real attention to detail when planning the app. Each object also has a gallery of a myriad of images associated with it, many of which are truly beautiful to behold. Key facts as well as access to data from WolframAlpha are also provided. You can send the WolframAlpha data to others via e-mail or Twitter. You can also open up WolframAlpha’s website in Safari for an even closer look. Once again, the level of detail and quantity of information Solar System for iPad provides is awesome. 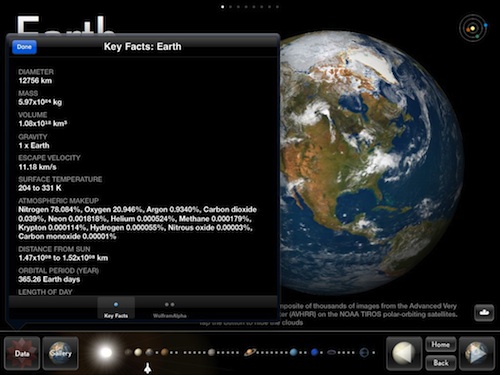 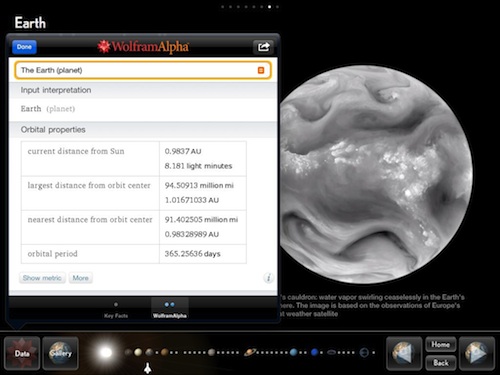 Touching the symbol of the Solar System in the upper right-hand corner of the screen takes you to an animated view of the solar system. This is a digital version of the former brass and wire apparatus called an orrery, which was used to show the motions of the planets and their moons. Solar System for iPad takes the orrery to a whole new level. You can pinch to zoom in and out and a slider allows you to speed up or slow down time, showing the motions of the planets and their moons in unmatched detail. I plan to use this feature to help me explain Johannes Kepler’s Laws of Planetary Motion to my own students. It’s just that good. 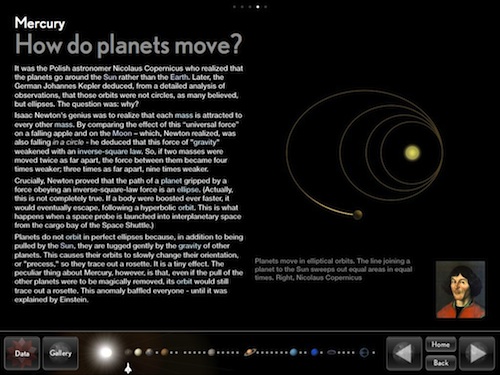 If you’re at all interested in astronomy or just have a real passion for science, I can’t recommend Solar System for iPad enough. At $13.99, the app isn’t inexpensive compared to most apps in the iTunes Store, but this level of detail doesn’t come with a 99-cent price tag. Once again, Touch Press has hit a home run with Solar System for iPad. Don’t miss out.

One thought on “Solar System for iPad
Review”