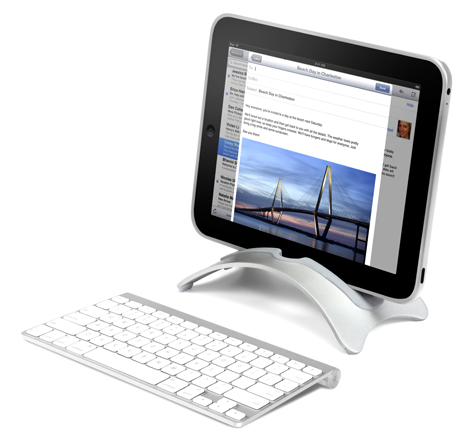 The people at Twelve South are very creative, with the flexibility necessary for marketing success. They demonstrated that cleverness last month by reducing the price of the BookArc for iPad from $39.99 to $29.99.

At the reduced price point, the BookArc is a reasonable purchase for those who are drawn to well-designed, sturdy high-quality products for which there is no serious need.

The BookArc is an attractive, sturdy, brushed heavy gauge steel stand with a modifiable slot that holds the iPad either vertically or at a slight angle from vertical, in either portrait or landscape orientation. In any of those positions, the iPad can be connected to its charger, and the user will continue to have ready access to the Home button and the other controls. The BookArc has soft, non-scratching silicone feet for secure positioning on a table top, desk top, kitchen counter, home theatre stand, or night stand.

The BookArc’s empty slot will hold an iPad that remains in many types of carrying cases. It comes with two soft silicon inserts for the slot, one to hold the bare iPad and the other to hold the iPad in a shell-type case. (I struggled mightily to remove and reinsert the inserts, but thatâ€™s probably merely a sign of my ineptitude.)

So, who needs the BookArc? Thatâ€™s the wrong question.

The relevant question is: if you get one (most likely as a gift from someone who loves you and knows that you already have everything you actually need), how can you use it? It enhances your iPadâ€™s utility as a photo frame, a movie viewer, a recipe holder, a display-reader of ebooks, a nightstand clock, and undoubtedly as a performer of a ton of other pleasant, nonessential but helpful acts of kindness.

Why am I fighting the obvious? It’s a dock! It’s a very attractive dock, and one thatâ€™s unique in displaying the iPad in landscape position â€” but itâ€™s still a dock! If you own a wireless keyboard but wish you also owned a dock, the BookArc can make you happy. If you donâ€™t want to use an external keyboard, youâ€™ll probably mostly ignore Twelve South’s invitation â€œâ€¦to interact with iPad. Just reach out and touch, swipe or pinch the iPad touchscreenâ€¦.â€ Twelve South seems to agree with that caveat, because it honorably adds: â€œWhen youâ€™re ready to play games or use apps that require more aggressive handling or movement, just grab iPad out of your BookArc and go.â€

The creativity of the people at Twelve South is further exemplified by the attractive packaging of the BookArc. The container is a sturdy, brown, faux-leather box, and the BookArc â€œownerâ€™s guideâ€ (a clever name for a two page instruction set) lists twelve (no surprise there!) reuses for the box, many of which are for kids.

I hope the foregoing comments leave the correct impression that this is a favorable review of a fun product, and a testimonial to a worthy designer/manufacturer/marketer.

Iâ€™m just unable to advise anyone that the BookArc will change his or her life.

On the other hand, as I suggested earlier in this review, the BookArc, particularly at the reduced price, will make a delightful gift â€” actually a double gift, considering the cool packing box.

One thought on “BookArc Table Top Stand for iPad
Review”