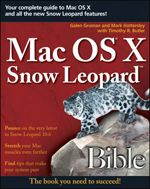 Race in the Snow
There are three ways in which a book on something as potentially ephemeral as an operating system (that’s no denigration: we love our big and powerful cats!) deserves success:

Mac OS X Snow Leopard Bible by Galen Gruman, Mark Hattersley and Timothy Butler certainly wins on the third count. At the time of writing (just ten days after the book’s publication) there is no available competitionâ€¦ the relevant volume in the ‘Missing Manual’ series is still a couple of weeks off, although it’s apparently 200 pages longer. One or two smaller, lighter-weight titles make have been published already – less than a month since 10.6 was made available by Apple – but they don’t try to compete with this excellent Wiley offering in scope or depth. O’Reilly’s Mac OS X Snow Leopard Pocket Guide (ISBN-10: 0596802722; ISBN-13: 978-0596802721) seems to have more material relevant specifically to Snow Leopard than to other versions of OS X.

And this is the key point: you have to turn to the outstanding PDFs made available by the TidBits people for a true distillation of subject matter dealing (almost) exclusively with (the very few material changes introduced in) Snow Leopard. The over 800 substantive pages of Mac OS X Snow Leopard Bible address much else besides.

Context
That’s no bad thing though: the book is aimed at anyone using OS X from beginners to advanced users. It provides details on navigating the Finder (for instance, there’s a nice little sidebar [on page 40] providing the rationale for the Menu Bar – something with which Windows users may be unfamiliar). The new system’s architecture is laid out, and a good explanation of what is and what isn’t (true) 64-bit is given. There’s a lengthy and reassuring description of installation – important, of course, because this differs from the procedure with earlier 10.n upgrades.

Nor is the breadth of Mac OS X Snow Leopard Bible’s coverage of the operating system in general something to criticize: given that there are so few really new features to Snow Leopard, it would be unreasonable to expect 800 pages to be devoted to them. Rather, Mac OS X Snow Leopard Bible is a worthy introduction and reliable reference source to using Apple’s latest operating system – almost whether or not you’re familiar with Leopard (10.5) or earlier versions.

Clearly, much of what’s covered does apply specifically to 10.6 (installation, Spaces and ExposÃ©, Services, some troubleshooting routines, Stacks, the new QuickTime and so on). So, although much of it does not, it would make little sense to buy this book if you’re still running 10.5, 10.4 or earlier – unless to provide an in depth and authoritative insight in what awaits you once you do decide to upgrade (to 10.6).

Snow Leopard-only features, procedures and tips for its use are flagged in Mac OS X Snow Leopard Bible with a ‘New Feature’ subheading; they are also set in bold. Usefully, differences between the way things work in the new OS and previous ones are also detailed: e.g. “The Input Sources pane in Mac OS 10.6 Snow Leopard had been called Input Menu in previous versions, and now has several new controls. Also, the Character Palette is now called the Character Viewer (but is otherwise unchanged)” [581]. These changes are not – unfortunately – aggregated anywhere such that you could gain instant access to everything that’s new in Snow Leopard. There is a ‘Cross-Ref’ icon, but it’s not so widely used as one might have expected, or hoped.

So, if you already own, or intend to own, OS X 10.6, this well-written book is as good an introduction and reliable a reference source as you can currently get and can be thoroughly recommended for all but the most specialist and knowledgeable users of the Mac.

Structure
Mac OS X Snow Leopard Bible is divided into five main sections: Getting Started with Snow Leopard (or about 46% of the text of the book); Networking and the Internet (18%); At work with Mac OS X (just 8%); Maintaining your Mac with OS X (17%); and Beyond the Basics (11%). In each section are from three to nine chapters – each further broken down into subsections which deal with specific topics. There is a comprehensive index of 25 pages, and 30 pages of glossary.

This typical Bible arrangement works well and provides ample structure and mileposts, should you decide to work your way right through the book, rather than dip in for topics in which you were interested, which is also possible, given the non-linear narrative and ways in which concepts and terms are covered.

Quality
There are plenty of black and white screen shots, though their reproduction is a little on the small side at a times. Each is referenced sequentially within its chapter – something that might usefully have been done with subsections tooâ€¦ iTunes as music library could have been 9.1, iTunes for podcasts 9.2, for radio 9.3 and so on. Not that the book shows any signs of having been rushed.

Indeed, Mac OS X Snow Leopard Bible easily meets the other two criteria outlined at the start of this review for success: it is comprehensive (a page and a half is devoted to ‘Enabling Keyboard Assistance’, for example; almost a page to Safari’s ‘speciality’ controls; half a page to the location of fonts on your hard drive etc). It is well written and largely avoids that annoying, ‘chatty’ style which bedevils other authors’ attempts to sound ‘accessible’. At the same time, the language is not forbidding; difficult concepts are explained well. With plenty of white space, topics use clear, consistent and pleasing typographical conventions which make use of bold, indenting, bullets and simple, short paragraphing with plenty of white space.

Using Snow Leopard
Probably the reason that most people will buy Mac OS X Snow Leopard Bible is to learn how to make (better) use of the amazingly sophisticated and flexible operating system – in all its complexities. This, indeed, is the declared aim of the authorsâ€¦ “As a new authors team, we have focused much more on providing tips and how-to context so you can get more out of your Mac than ever before” [xxxi].

Since a tutorial approach has been avoided, if you want to skip the chapters on scripting, Automator and the Unix shell script, for example, without then being left high and dry because a step is missing, you can. If you want aggregated in one place many of the keyboard shortcuts useful in navigating the file system, it’s there – actually, in two places. If you need to set up Wi-Fi from scratch, there’s more than enough to get you going – with a nice little introduction to IP addressing [p.441] at the start. Small steps, maybe, but no attempt to infantilism the enthusiast. Most sections conclude with a simple, useful summary. And those procedures and applications (such as printing/faxing and Mail, say) which are more complex are in fact covered step by step; often menu item by menu item. A true (Wiley) Bible.

All the major Apple utilities are outlined – proportionate space being devoted to those which most would agree are of greatest important – Mail, iTunes, Address Book etc. There’s a whole chapter [16, pp 487-476] devoted to Services. MobileMe is covered in great detail; though only a couple of pages devoted to synching in that context. The fact that there are lengthy chapters (of 55, 20 and 22 pages respectively) devoted to system preferences, fonts and security makes it clear that Mac OS X Snow Leopard Bible is about the operating system – in the widest sense of the word – and not about all the things like multimedia, twitter, web design and databases that you can do on a modern Mac.

Conclusions
Once you understand – and are satisfied with the fact – that Mac OS X Snow Leopard Bible deals with OS X from the point of view of users of the Mac’s operating system, which is now 10.6, Snow Leopard; and that it is not devoted exclusively to the operating system’s new features, you are likely to be impressed by its standard of presentation, handling of the material, comprehensiveness and ease of use. At present this book represents the best available printed resource on Apple’s latest operating system.

Pros: Mac OS X Snow Leopard Bible is comprehensive, accurate, accessible and well-researched. It will answer most users’ questions and guide most users – new and ‘seasoned’ – towards getting the best from Snow Leopard.

Cons: For those who are very familiar with OS X, the absence of an aggregated list of new features and functionality in 10.6 is a missed opportunity.