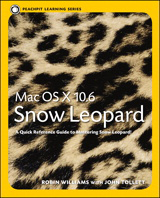 So you’ve purchased yourself a new Mac or decided that it’s time to update your Intel Mac and you’ve bought Mac OS 10.6, Snow Leopard. You’re not really sure what to expect.. so what are you going to do? Consider purchasing Robin Williams (not the actor) and John Tollett’s new book, “Mac OS X 10.6 Snow Leopard – A Quick Reference Guide to Mastering Snow Leopard!” Ms. Williams is well know for her writing style that beckons the reader into the book, based upon her years of experience in writing and teaching, making books a pleasure to read. Mr. Tollett, well known as a designer, art director, and illustrator, has worked with Ms. Williams on many of her books.

Ms. Williams book is designed for the new user, either of a Mac or of Snow Leopard, and begins with the very basics, getting to know and use the desktop and the Finder. The first section, Mac OS X Basics, covers everything from Home, through Folders, the Finder Window, the Dock, Keyboard Shortcuts, Expose and then works its way into the next section, Applications.

For someone new to OS X and Snow Leopard, Ms. Williams starts you off with an introduction to the Applications Folder, what’s there and then proceeds to cover the basic apps that one finds on the OS. TextEdit, Mail, to include breaking it down to setting it up, customizing, smart mailboxes, Notes, To Do Items, downloads, attachments and then into the Address Book, Safari and even into RSS. She then moves on into iCal, iTunes, iChat, Preview and the other miscellaneous items on the system; DVD Player, Font Book, Photo Booth, QuickTime Player, Spell Checker, Colors, Character Palette, Speech and working with multiple apps at once.

As Ms. Williams continues teaching the reader Snow Leopard, and that is exactly what she is doing, she works the reader into making the Mac their own. How to do that? By customizing the Dock, the Finder, Finder Windows, Preferences, working with Dashboard, setting up printing and faxing, taking one Mac and sharing it amongst many users, using Spotlight, and learning all about Time Machine. Now that she has shown the reader the basics, she continues on connecting to the Internet, and more into the Tech aspect; troubleshooting your internet connection, troubleshooting Mail, sharing files, Bonjour and screen sharing. As she nears the end of the lessons, Ms. Williams covers basic troubleshooting, making sure that your Mac and your files are secure and lastly, how to upgrade your Mac and migrate from one computer to the new one.

As one reads through the book, one is also struck the by fantastic illustrations that abound. No simple basic drawings here, Mr. Tollett has done a superb job of illustrating this book. It is really a pleasure to see the care that both Ms. Williams and Mr. Tollett have taken to produce a really fine tutorial, if you will, on how to work with Snow Leopard.

So to review:
A very well written and superbly illustrated book that explains the internal workings of Snow Leopard, covering all the things that a new user should learn from A to Z. If you are looking for a really good book to have on hand or to give as a gift to someone, consider Ms. Williams and Mr. Tollett’s Mac OS X 10.6 Snow Leopard book. If you are a seasoned Mac user, you may also wish to check out Ms. Williams and Mr. Tollett’s book. Either way, I don’t think you’ll be disappointed.