Ever not realize there’s a problem until someone comes up with a solution for it? If you own a 4th generation Apple iPod Nano and are physically active while using it (you know..the “E” word, exercise), then you probably have some kind of case with a clip or a loop or some other less than convenient way of securing it. Whether your thing is Transcendental Meditation or jumping out of perfectly good airplanes with nothing between you and certain death but a thin cloth, if you use an iPod Nano while doing it you’ve probably run into a situation where the iPod is just in the way. The iStik allows you to put your iPod just about anywhere you wear clothes. 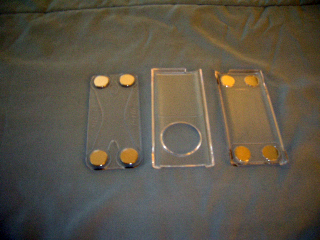 Here’s what the iStik is; you have a clear case that the iPod fits into snugly with easy access to the click wheel and the hold switch. You also have a second piece of unattached plastic. What holds them together is four magnets on each located on the corners. WHAT?!? EIGHT FRIGGING MAGNETS NEXT TO MY ELECTRONICS! Relax, the iPod Nano does not use hard drives to store your content like the iPod Classic though you need to make sure you don’t get it too close to your computer unless it’s a MacBook Air. with an SSD drive for storage Also if you have a heart pacemaker or any other medical devices that can be affected by magnets this is probably not a product you want to get. 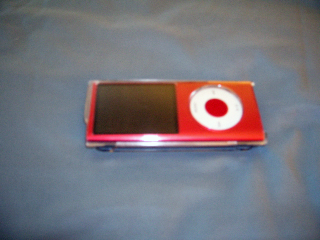 How does it work? Simplicity itself. Take the plastic piece that doesn’t have an iPod in it and position it inside some part of your clothes that is near where you want to carry your it. Then place the the piece WITH the iPod somewhere near it. The magnets which are very strong will do the rest. How strong are they? I placed the iPod with the iStik near the magnet base between two layers of a very thick sweatshirt and it held it firmly in place. Relatively thin sweaters were also no match for the holding power of the iStik. 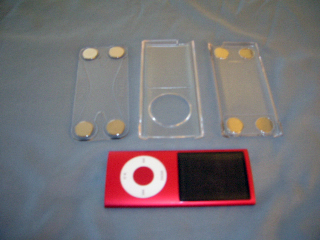 The iStik besides being a holding case for your iPod on the go also protects really well. The only exposed areas are the iPod’s click-wheel, the hold switch, and the dock connector/ headphone jack. Naturally it adds some bulk to the device, but not so much to make a difference. Plus being a clear-case, it doesn’t take away from what still is a good looking iPod unlike many other cases that completely enclose the device. 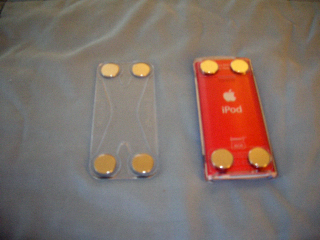 One criticism I have about the product is be that it can be difficult to remove the iPod from the case. There is a small groove near one edge that you stick a coin into (these are the instructions as given by the iStik folks) and twist. There is the possibility of scratching your iPod if you put on and take off the iStik a lot. Putting the iPod back in and closing the two piece enclosure isn’t as easy as it could be. Also putting it back together can be somewhat problematic if the iPod is not inside. Some plastic guides or grooves would be a nice addition to the next version.

This is a great product if you jog, bike or have some kind of fitness program where you don’t want your iPod hanging down or in the way.