A couple of years ago I had the chance to review ArtRage 2 by Ambient Design and it is one of my favorite, low priced, paint programs for the Mac. For $25 you get a fantastic Painter like program.

Since that review came out, ArtRage 2.5 has been released, and many new features have been added. It was time for an updated review!

My favorite new feature is stencils. Stencils acts just as you would expect. You pick a stencil and paint the inside/opening just like a stencil would be used in the “real world.” 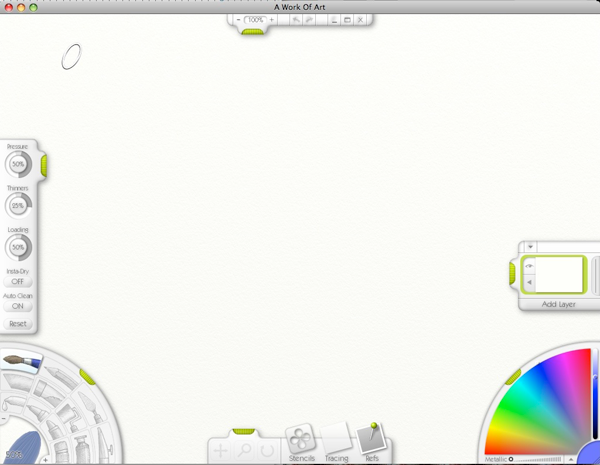 I mention stencils, because additional stencils is one of the features in the new Artrage Deluxe offered by Smith Micro. ArtRage Deluxe is the same ArtRage I love with a lot more for $49.99. It is available as a download or in boxed format.

In addition to the stencils, you get the following: more stock images to trace (tracing is another cool feature where you trace your photo and it becomes a painting), more tutorials than the standard ArtRage, sample paintings, and videos of painting being created. You also have a DVD that works on Mac and Windows.

So the question is as follows: Is it worth an extra $25 for all of the extras in the deluxe version? You’ll have to make that decision on your own. The stencils are very cool. Additional tracing images are nice, but if you are going to trace an image for a painting you’ll probably want to trace your own photo.

If you are an ArtRage power user and want to get the most out of ArtRage, the videos and tutorials would be for you. You’ll learn a lot and really make your paintings betters.

I use ArtRage in my classroom, and the deluxe version would be great for my students. They love ArtRage, and the more stencils the better! Also, the videos are great motivators for the students to create, and the tutorials are great projects for the kids!

So, as I said, the decision is yours. An extra $25 is a lot of money for some stencils and some videos. However, if it is something you will find use for it is definitely worth the money. Even at $50 you are not going to find a better paint program than ArtRage at that price.