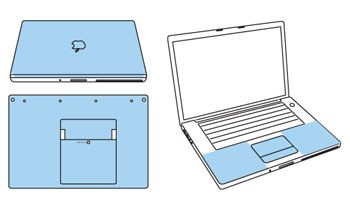 After my laudatory review of the BodyGuardz protective film for iPhone, the Weeks Division of MyMac Labs received an email requesting a review from a competing film manufacturer, Zagg, Inc. requesting a MyMac.com evaluation of their invisibleSHIELD film product. I was curious to see what other film products were like, so a MacBook Pro 15″ full body kit was shipped posthaste to our Tucson laboratory.

Zagg says that invisibleSHIELD is made of the same anti-erosion plastic that’s used to protect helicopter blades and the leading edges of propellors. Be that as it may, my first impression was that it looks and feels very strong. Zagg has videos of the material being tortured on their Web site.

I elected to try the full-body version; other kits covering fewer parts are available at lower cost.

As mentioned by fellow MyMac.com writer Scott Spaziani it can be a bit nerve-wracking applying any film product for the first time. I took advantage of my experience with the BodyGuardz film, and the invisibleSHIELD application went flawlessly. For newbies, invisibleSHIELD provides an installation video on the web site.

The printed instructions that came in the mailing tube were skimpy. It took me a while to make sure I knew where each piece of film went. DO NOT remove the film from the backing until you know you are ready to apply it! Having a piece of film off the backing and not applying it right away is asking for trouble. Zagg would be well-advised to add a diagram showing which piece of film goes where. It’s less obvious than you might think!

After having done several film applications of various products, I’ve concluded the key to a successful film application is to use lots of the spray-on liquid on the film itself. That’s lots, LOTS, L-O-T-S, of fluid. Make sure that your hands are wet with fluid, too. Also, make sure the gadget is clean before you commence. You don’t want fingerprints or other bits of dreck enshrined under the film. I used Windex to clean the MacBook Pro, and then set it aside for a few minutes to make sure it was dry.

Remember; don’t spray the gadget with the application fluid; spray the back of the film!

There are several reasons to be generous with the fluid:

1) Wet film is far easier to slide around to get it properly positioned.
2) You have more time to position the film
3) Bubbles are easier to remove with the squeegee tool when there is plenty of fluid to be removed.
4) Wet hands prevent the film from sticking to your hands.

To be sure, you don’t want fluid running into the various ports on your laptop or other gadget. When I applied the largest piece of invisibleSHIELD, the top cover, I had two dish towels rolled up and placed next to the sides of the lower case. This prevented fluid from running into the ports. I also had a dish towel covering the keyboard and trackpad, as well.

The smaller pieces of film were easier to apply, as you don’t need to worry about keeping a big piece of film from sticking to itself before you drape it on the computer.

From start to finish, getting all the pieces applied took about forty minutes. When the application was complete, I left the MacBook Pro alone for twenty four hours for the film to dry out.

The next day, the film had fully adhered, with no loose edges or corners. With invisibleSHIELD applied, the “feel” is different than an unprotected MacBook Pro; the invisibleSHIELD has a tackier feel to it that makes it easier to hold on to.

I have not yet had the invisibleSHIELD tested by the hards knocks of my business travels, but I suspect the film will repel most ordinary damage, short of crumpling the metal itself. It certainly feels tough.

Conclusion.
Zagg’s invisibleSHIELD, properly applied, will protect your Mac or other gadget against the ordinary scrapes and scratches that can disfigure your computer or cell phone.

MyMac rating 4 out of 5. The product is quite good. The film’s grippy feel is nice. Better printed instructions would make application easier.