Only ten percent of MyMac.com readers will ever need to use a DriveDock to mount a bare hard drive, but you know who you are, and I hope you’re paying attention. WiebeTech DriveDocks allow you to connect any computer to an exposed drive, one that typically is outside of a case, enclosure, or other computer.

Why would some otherwise normal person want to do such a ridiculous thing? Techies and power users frequently need to retrieve data from hard disks that were in a previously-active computer. Geeks know that bare drives are not expensive, and they can get a huge bang for their buck when function is more important than form.

In my case, I often have to swap drives into and out of clients’ computers, or transfer data from one hard drive to another, outside of any computer enclosure. WiebeTech DriveDocks are my geekware of choice, as they have been from the early days of this innovative Kansas techno-company.

To prepare for an evaluation and review of WiebeTech’s new Fourth Generation Drive Docks, I read CEO James Wiebe’s lengthy white papers relating to the topic. I find them to be mind-expanding reading, but you may want to make sure you’ve had an additional cup of coffee and walked a couple of extra miles before plowing through them, because you’ll need all your brainpower and energy to maintain mental acuity throughout each lengthy treatise.

In correspondence with Bill Head, Support Manager for WiebeTech, I learned the following about bare drives versus encased drives, in response to James’ latest 28-page PDF white paper on “Storage Enclosure Reliability.”

1. The failure probability of a drive connected to a WiebeTech DriveDock would be equivalent to that of a fixed, single-drive enclosure (such as our ToughTech 800). The main difference between the products is that the enclosure encases the drive in a protective covering. There are certain factors that may change the equation, however:

b) On the other hand, drives used with a DriveDock are more likely to be attached and removed frequently than those inside a fixed enclosure. This could potentially wear out the drive interface over time. For this reason, DriveDocks are best used in situations where several different drives are accessed. An example would be a technician who works with different customerâ€™s hard drives every day.

c) If the drive is going to be carried around to different locations, the protective covering of an enclosure helps protect the drive against damage, thus prolonging its life span. The ToughTech, for example, has FlexMount â„¢ shock protectors to cushion the drive in case it is dropped, in addition to a sturdy aluminum shell.

Because I was unfamiliar with all the interface possibilities of Serial ATA (SATA) hard drives, Bill Head explained:

2. If your new SATA DriveDock is the full-size SATADock (SDK), then you can connect it to the computer via FireWire or USB. If itâ€™s the mini SATADock (MSD), then it only connects via SATA. The ideal usage is to connect to a SATA host card. It also works with eSATA hosts if you use a SATA to eSATA converter cable (such as our Cable-41). If you donâ€™t have a SATA host card, but have a computer with SATA drive ports built into the motherboard, you can remove one of the metal PCI slot covers and run the cable through the resulting opening to connect to those ports.

I was curious about the design and engineering of WiebeTech’s DriveDocks, so Bill provided the details:

3. Most of the original design of the docks is done in-house. The amount varies between models. Sometimes, weâ€™ll create a very specific set of features and parameters, then let an overseas OEM [original equipment] manufacturer work out the specific engineering details. Other docks are entirely home grown and manufactured. For our bus-powered units, the design and manufacturing of the power boards is done entirely in-house. Part of the reason is to protect our proprietary technology. Similarly, the write-blocking technology in our forensic docks is designed and implemented in-house.

AC-powered DriveDocks are potentially more reliable, but bus-powered docks are a lot more convenient. These Fourth Generation DriveDocks are (with exceptions noted in the review below) AC-powered, so I wondered if they were replacing the company’s existing line of successful bus-powered hardware. Bill continued:

4. Our v4 dock family currently consists of read/write AC-powered docks only. Bus-powered versions require additional engineering, so they are usually released several months later. We will probably announce bus-powered versions of the v4 docks later this summer. In the meantime, we are still selling the bus-powered units with the original form factor.

[Note: bus-powered units are starting to appear on the company’s web site, so consider the paragraph above a motivator to look before you leap. In general, bus-powered docks are great!]

And then he reminded our readers to:

Take our 2-minute survey and register to win a free ToughTech with drive.

Michael Gaskins, International Sales Manager for WiebeTech, reminds our readers not to overlook: the feature of our V4 DriveDocks that allow them to be used inside of a computer. Letâ€™s suppose you need to access a drive and really do not want to remove it from the host computer. The dock can connect to the drive via the ribbon cable and get power by attaching one of the host computer’s spare Molex power connectors to the DriveDock. Use DC power instead of AC power. Turn on the power to the host and now you can access the drive.

Depending upon which DriveDock you purchase from WiebeTech, you will note different physical details, but their v4 family, in general, features new LED indicators to “let users know that all the bells and whistles are operational.” Dock hardware is bright blue durable, lightweight aluminum, plus connectors, fittings, ports, and cables that are generic black on most units. High performance Oxford 922, 911+, or 924 FireWire bridges are built in, for rapid data transfer and performance.

We’ll look at each specific DriveDock sent to MyMac.com by WiebeTech, starting with three SATA docks for bare drives: 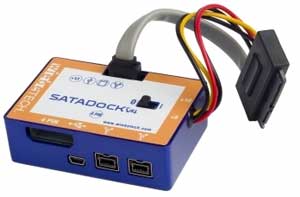 After unpacking and examining the contents of the package, I attached the included silver base plate to my new 160GB Hitachi bare SATA drive. Screws and self-adhesive bottom bumpers are provided for this purpose, but no screwdriver. Suggestion to WiebeTech: throw a small screwdriver into each package to assist your users with this out of box experience. They will really appreciate this extra touch.

I unwrapped the blue aluminum SATADock, its USB2 and FireWire 800 cables, plus a two-stage power cable, and then attached SATADock to my bare SATA hard disk via the special SATA connector cable that is hard-wired into SATADock. FireWire 800 connected my G5 to SATADock, and I switched the unit on.

LEDs flashed on SATADock, and my computer display told me this new SATA “disk not readable,” after which I initialized and partitioned it using Apple’s Disk Utility application. I was now ready to proceed as advertised.

Data transfer was faster than I had ever experienced with an external drive, and overall performance was flawless. All cables and ports work perfectly, but the physical DriveDock is a bit tricky to position. Its own cables are either too long or too short, depending upon the space available, and I recommend a redesign to allow SATADock to sit upright or lay flat, instead of hanging at a peculiar angle.

Our MyMac.com rating for SATADock is tops for performance and okay for physicality, with a final score of 4 out of 5. In one word, I call it: good! 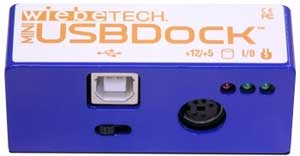 Connecting and mounting with this cute little blue gem is effortless and efficient, but the physical interface is a bit wobbly. I reiterate from previous correspondence with WiebeTech they should design some sort of elastic or metal band or clamp to hold the dock firmly in place while attached to a bare drive. MBD’s on/off switch is in an inconvenient spot on the tiny drive, and should be moved to the upper left corner for improved accessibility. MyMac.com rating for Mini USBDock is 4 out of 5. In a word, it’s: convenient!

Mini SATADock (Part #MSD) $75 is also available. It connects via a SATA cable to the host computer. For supergeeks only; to be tested by MyMac.com when I have an appropriate interface available. Provisional rating is 4 out of 5.

Next comes an instant favorite: 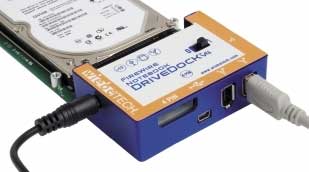 I’m completely new to handling small internal drives from laptops, and I’m sold on the experience. In a couple of minutes I quickly inserted a loose notebook drive into NBDDV4, screwed in its protective plate and affixed its rubber bumpers, attached a FireWire 400 cable to the dock, switched it on, watched some lights flash, and was transferring data back’n’forth like lightning.

Cable options include two FireWire and one USB-2 port. NBDDV4 is powered directly from FireWire when available. Additional power options are via AC adapter or 4-pin Molex, when bus power is not handy. The two FW400 ports are daisy-chain-able (is that a real word?).

MyMac.com rates Notebook DriveDock v4 as 5 out of 5. Let’s call it: terrific! 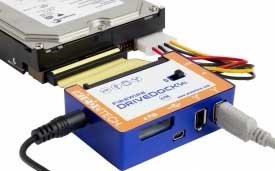 FW800 is a personal favorite, and I use it as often as I can on my G5 PowerMac and G4 PowerBook. MyMac.com recommends you spend the extra $20 for CDKV4 over FWDDV4, because FW800 is here to stay, as seen on Apple’s new 17″ MacBook Pro. Way to go, Apple and WiebeTech! FW800-to-400 cables are easy to obtain from Wiebe and other locations.

Ribbon cables allow for a secure fit between bare drive and dock. The connection is very firm, but dock+drive placement can be a bit awkward on your physical desk or worktable.

MyMac.com’s rating is 4.5 for both FireWire DriveDock and ComboDock, so choose whichever one is best for your purpose. I call FWDDV4 “good” and CDKV4 “even better.”

Minor gripes and suggestions aside, MyMac.com applauds WiebeTech for making good products even better, and for giving our readers and Podcast listeners early looks at the company’s extensive lineup of hardware goodies.