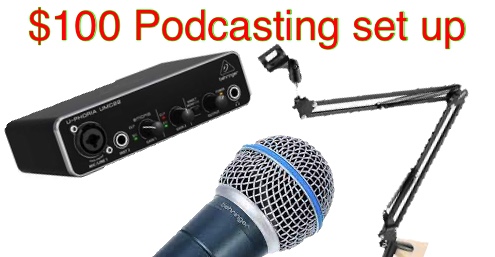 Here’s a terrible confession! I buy a LOT of microphones. Well that’s probably not much of a shock after all. One thing learned is that you don’t need a lot of money to be able to record good audio. This means that while good audio for under $100 can be done, it’s possible to do much better. It will just cost a lot more. The main focus of this article will be on XLR solutions and the equipment required to get that audio into your computer.

What are you recording?

When I say recording audio, mostly it means spoken word. Whether for podcasts, voice-overs, or whatever else you want to record your voice with, the right gear can make all the difference. You can use this equipment to record other instruments like guitars, pianos, xylophones, trumpets, or bagpipes (ew), but there are much better ways to get superior results than what you’ll read about here.

The other part is that less can be spent than this by getting a USB-based microphone. For example the Audio Technica ATR2100X-USB, the ATR2005-USB, Samson Q2U, Blue Yeti, and many others. If all that’s needed is just to record your voice, then these and others are also fine options. So why not go with a USB microphone? Well, most pure USB options are going to be self-limiting. As in, you can only just plug in that one item and have it be recognized by your computer.

Also, while some of the options listed here are reasonably good microphones, many in the sub-$50 are just cheap junk. Will they record your voice? Yes. With anything that might actually represent what you sound like in real life? Probably not. There are some very good USB microphones out there (like the Rode Podcaster or Audio Technica AT2020-USB) but they cost more than $100 which is the focus here.

Some time in the distant past there was a company called Behringer that had an absolutely TERRIBLE reputation with audio gear. “Make it cheap!”, seemed to be the company’s motto. Quality as well was not exactly first and foremost in their engineer’s and top executive’s minds. Over time, things changed. Now a lot of people actually buy Behringer’s gear NOT because it’s inexpensive (it is), but because it’s well made and does what it’s supposed to do. So fair warning if you like stuff by other companies (which is fine), the microphone and interface I’m going to recommend come from Behringer. You are more than welcome to comment below or contact me through the usual sources with alternatives.

There are a lot of good options when it comes to microphones. When you set a low price limit, the choices for good AND cheap can be narrow. To stay under $100 for the entire setup means there are even less choices. Based on what I’ve tried, I really like the Behringer BA-85A.

The Behringer BA-85A is an amazing microphone especially considering its cost. It retails for $24.99 and at that price is hitting way out of its league. It’s a dynamic super-cardioid microphone with a frequency response of 50Hz to 16kHz and built really well to stand up to a lot of punishment. It also sounds good and has been well received against many competitors that are much more expensive.

Another good choice is the Superlux TM58 which is another handheld dynamic microphone. It too has a cardioid polar pattern like the Behringer and at $8 more manages to stay with the $100 price limit.

With microphone in hand, how do you get you voice into the computer? Unless your computer has an XLR input (trust me it doesn’t), you’ll need something to interface with it and within the provided budget of $100, the Behringer name comes up again. There are two different inexpensive USB audio interfaces that Behringer makes that would work, but there’s really only one to consider. The two interfaces are the UM2 at $45 and the UMC22 at $49 . Both units include the USB cable required to connect to your computer and both work out of the box with your Mac. No drivers or other related software required. With that information in hand, their prices are about four dollars apart, but the UMC22 is a far superior interface.

The UM2 has a plastic body which just makes it feel cheap. It provides 48Vdc of phantom power which most condenser mics require and is bus-powered from your computer. It has a headphone jack to monitor, but there’s no way to adjust the volume from the device itself. Lastly, I’m not a fan of the Xenyx pre-amps the interface uses which Behringer also has in its mixers.

The Behringer UMC22 on the other hand uses Midas-branded pre-amps which sound much better. It too is bus powered and will provide 48Vdc phantom power for mics that need it. Not only does it have a headphone port to monitor audio, you can adjust the volume as well. It would be nice if it had a monitor mix knob like the more expensive UMC204HD, but that interface alone is over $100.

Many microphones come with some kind of small folding stand to mount the mic to. These are for the most part, useless. They’ll position the microphone too far away to properly capture your voice. You would need to perform some gymnastics to your mouth close enough which in turn would quickly become uncomfortable. What you need to make things easier on yourself is what’s known as a boom arm. There are many to choose from in the low price range. Likely most are made by the same company and just re-branded, but I’ll save you some time and recommend this one from Neewer.

So that’s everything right? Well not quite. You’ve connected the audio interface to the computer and the microphone to the boom arm. You still need to connect the microphone to the interface. While there’s many companies more than willing to sell you an XLR cable with gold tips and angel hair threaded cables, all you really need is a basic one. So here’s a 10-foot long cable from Amazon that will easily do the trick at not much cost. A little more than $8.

Let’s sum it up

The final tally (not including tax) comes to around $97. Not a bad price for some audio gear that will sound pretty good and give you room for upgrades in the future. If you have a few more dollars to spend, you can also get a Pop filter for the microphone to cut down on plosives. That’s the naturally hard sounds (like the letters S and P) you make when you speak. Here’s a link to a 5-pack with multiple colors to suit your personality. These come to about $7. You could get a different boom arm like the Neewer NW-35 which is a little longer than the one I recommended above and includes a pop filter that drops in front of your mouth for about $25.

After all of this an important thing to remember is that it is based on what I think is good audio. Maybe instead I should mean good enough audio. Everything is subjective, but with these items I’ve given as a baseline, you can branch out and try other things. If you choose a new microphone, the audio interface (as long as it’s an XLR mic) will still work with it. If you decide to get a USB mixer or different audio interface, the microphone, boom arm, and cable will still work well.

One last thing you may need is a decent pair of headphones or earbuds. These too can be very subjective, so go with what sounds best for you.