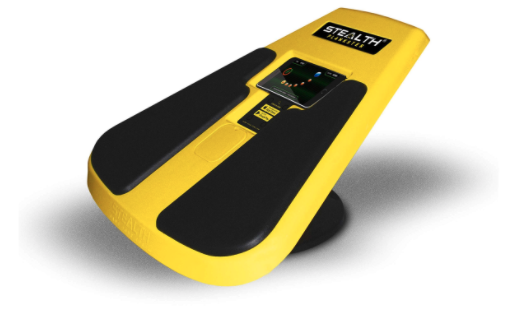 STEALTH is a mechanical device that assists users in performing a range of plank maneuvers to increase core strength while also benefitting other muscle groups. If you donâ€™t know how to perform a plank, visit Physiopedia for instructions. If planking seems beyond your abilities then read on: there are gentler introductions that may suit you.

Although not a connected device in itself, STEALTH has a mounting-well for a smartphone. Using games apps from STEALTH (some free, some paid) the smartphone accelerometers are employed to orchestrate user-movement and the experience is turned from being a chore into being a play session. That way fitness is achieved by stealth. As the STEALTH tagline says, â€œGAME YOUR COREâ€.

Two versions of STEALTH are available. The DELUXE is wider and more comfortably padded; it is suitable for commercial use and comes with an included one-year extended warranty. The STANDARD (yellow) is slightly narrower and not padded across its full width. Both have a 30-day money-back guarantee and use the free STEALTH smartphone app. We offered the the DELUXE review sample to a range of testers and asked them for a short response after a few days of use.

The testers ranged from some very fit and dedicated young gym enthusiasts (who had been denied their usual gym sessions during the state-mandated closures in response to the COVID-19 pandemic), through a nuclear family of six to seniors, one of whom physical problems that prevented entering into a basic plank posture (more on that later).

The device was well received. There was agreement from all testers that they would benefit from continued STEALTH usage. Even the very fit participants acknowledged that the device showed them that their core strength could and should be improved. You may read about the benefits of core-strength exercising in PLANK 4 Life by Dr Owen Legaspi and Lean Core System from the Stealth Body Fitness program.

Entry-level users take heart: the information card accompanying STEALTH shows a less aggressive way to plank. That senior user who was unable to adopt a plank posture then placed the STEALTH on a table and did some gentle exercises in a standing posture while leaning over the device. Later, by lowering the device onto a sturdy coffee table, exercising while kneeling became possible. Eventually, the less-aggressive plank posture recommended as an introduction by the STEALTH instruction card became possible. Slowly and gently is the best way to start until you gain some adaptation.

Your own experience may vary, but even without achieving a full-plank posture it is still possible to gain core-strength benefit. Other seniors without mobility issues were surprised by what they were able to achieve. Following the instructions/warnings and being cautious not to exceed oneâ€™s capabilities is paramount. Done properly and avoiding over-stress should give results after the first week.

Is it for you? That depends. The adoption of a fitness rÃ©gime is often initiated by a generalized motivation such as  wanting to feel or look better. Motivation, however, is a fickle servant and deserts us as soon as the going gets tough. Thatâ€™s when your plan, your self-discipline, and your perseverance in an established routine are what will get you through and keep you striving for your your goal. STEALTH is no different from any other device in this respect, although our already-fit testers found it fun and enjoyable.

MyMac rating: 8 out of 10. This simple, robust, and well-finished device should give long service. We recommend it as a lower-cost and space-efficient option for anyone who is serious about getting fitter or maintaining existing fitness.