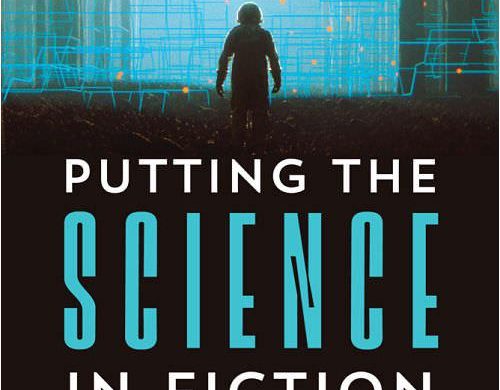 Putting the Science in Fiction-Edited by Dan Koboldt Writerâ€™s Digest Books at WritersDigest.com $18.99USD e-book or book direct (recently discounted, but shipping may apply to book sales) or from bookshops and online retailers This is a serious educational book that is also entertaining. The editor, Dan Koboldt, is the genetics researcher and bowhunter behind the Science in Sci-Fi blog. The breadth and scope of the content can be determined from list of sections: â€¢ Research Labs, Hospitals, And Really Bad Ways To Die â€¢ Genome Engineering: It Never Ends Well â€¢ The Brain Is Wider Than The Sky â€¢ From Zero To Sixty (Legs, That Is) â€¢ Things To Know For When Skynet Takes Over â€¢ Earth And Other Planets. Yes, Pluto Counts! â€¢ Sometimes, It Really Is Rocket Science â€¢ Star Wars And The Far Future The subtitle Expert advice for writing with authenticity in science fiction, fantasy, and other genres should only be taken at face value by writers for whom it is aimed. The rest of us can read and learn how facts can be Bent out of shape from societyâ€™s pliers (a line from Itâ€™s Alright, Ma (Iâ€™m Only Bleeding) for which we need to thank Bob Dylan, and thatâ€™s a fact). Anyone with an interest in Getting It Right can and will benefit by reading this book. Each of the fifty-nine entries in the anthology is written by an expert in the field. The range of expertise on offer is staggering: engineering, microbiology, nursing, toxicology, neuroscience, psychiatry, physics, entomologyâ€”and on and on; you get the idea. The editor, writing as a geneticist not as a bowhunter, has contributed three of his own articles. Three of our own favorite articles in the book are on earthquakes, wolves, and wildlife biology: Earthquakes: Fact vs. Fiction by Amy Mills has good news if you lives in Californiaâ€”if, or even when, there is another large earthquake, a tsunami is unlikely because they generally occur in subduction zones, which the San Andreas Fault is not. Portraying Wolves Fairly and Accurately by Neil Degrasse Tyson suggests we demand evidence and think critically, arguing that wolves are a keystone species that has been systematically eliminated because of cultural history based on poor story telling. Wildlife Biology by Rebecca Mowry, Cactus Wrens do not live in Maine because there are no cacti there, doh! and polar bears and emperor penguins live on opposite poles of our planet, whatever you may have inferred from viewing a certain Coca-Cola advertisement. This book will help you avoid embarrassing yourself in this way like a doofus. Readers may check the qualifications of the authors in the About the Experts appendix. There are entries for the terms earthquakes, wolves, and wildlife biology in the index. This is not a collection of trivia or mindless well-I-never anecdotes. The pieces are shortâ€”succinct is an even better descriptionâ€”and the writing is lively throughout the text. The advice for writers is usually brief and is also usually good advice for non-writers to follow when they find themselves discussing the subject matter in general conversation. MyMac review rating 10 is a rare out of 10 for one of the most entertaining and enjoyable books we have read recently. It is a thoughtful, engrossing, well-written and well-edited compendium of guidance on a wide range of subjects.