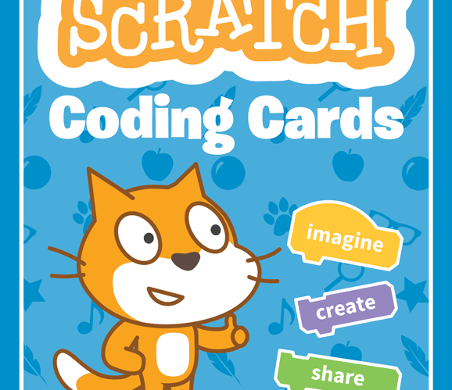 I was given the opportunity to review Scratch Coding Cards, a set of 75 laminated cards that introduce to children to coding. I took Java and Javascript classes almost 10 years ago when I went back to college, and thought I would lose my mind, so I was quite interested in comparing the learning experience.

Scratch Coding Cards were created by Natalie Rusk, one of the lead developers of Scratch at the MIT Media Lab. The color-coded cards are based on 10 themes, including Animate Your Name, Letâ€™s Dance, Race to the Finish, and Catch Game. The front of the card shows the goal of the card, and the back gives the step-by-step instructions. In some groups the cards can be used in any order; in others they need to be done in sequence, as each skill builds upon the previous one. 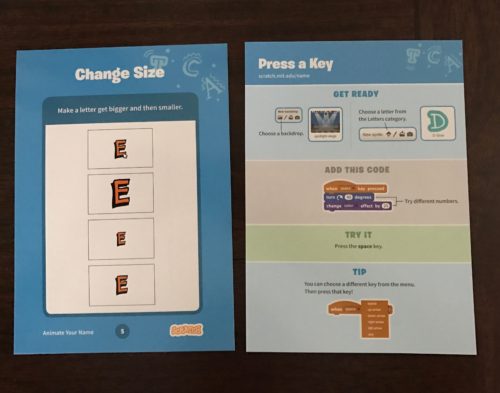 To begin, go the Scratch web site. Creating an account is optional, but may be helpful in order to save games and post in the forums. Choose a background and a sprite, which is a character that will perform the actions you assign. Drag and drop blocks into the Scripts Area to code the sprite or sprites. Many blocks can be customized and have either a drop down with choices, or an area for users to fill in. 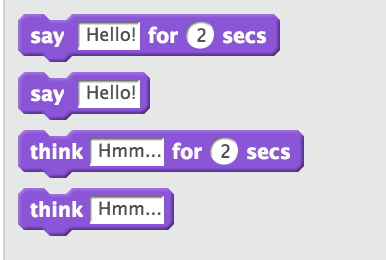 My son is a 4th grade teacher in another state. While he was home visiting for the holidays I asked him to look at the Scratch Coding Cards. His opinion is that the cards are very easy to follow, and his students would enjoy using them. He also thinks that some of his kids would ignore the steps on the cards and do their own thing, either trying to figure out the end result themselves, or creating their own game. Either way, he feels Scratch Coding Cards are a great classroom resource.

Many of the projects are available on the Scratch web site; however, I feel having them in physical form makes it much easier for the students to follow along. Plus, the options arenâ€™t as clear on the web site, and it ends up giving the kids less space to work.

No where on the cards, nor on the web site, was their any explanation of coding terminology, even in basic terms. In the future Iâ€™d love to see a more advanced set of cards that discusses the cause and effect of coding, and defines coding terms, such as variables, if/then, and object to gradually transition students to full fledged coding.

The Scratch web site is a wealth of information for both parents and educators. Itâ€™s available in over 40 languages, making it accessible for users around the world.

Scratch Coding Cards are a fun way to teach kids basic coding principles, all while playing games. Where were these cards when I was learning to code?