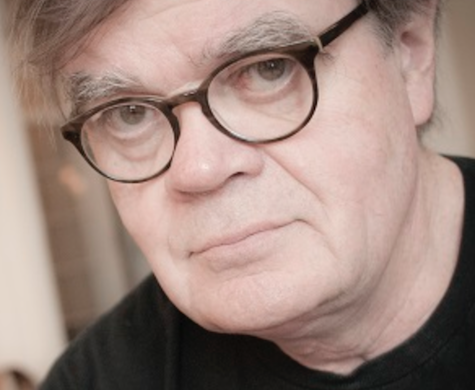 Garrison Keillor doesnâ€™t like tattoos. Or airplane announcements. He likes being old, cranky, and mostly healthy. He is 74 years of age and has been performing since he was 30.

On Tuesday night, November 29, he charmed and amazed a full Fox Theater audience of mostly survivors of the sixties in Tucson, Arizona. We sang along in harmony with his chestnuts of Americana, laughed sporadically at his bizarre Minnesota humor, and were in unison in awe of his performance. Over two hours, solo, standing and occasionally resting on a stool, without a pause or a drop of water, he was ours and we were his.

It has been a quiet week in Lake Woebegon, but itâ€™s a busy time for the lanky, jowly, and slightly pudgy radio host and author. Heâ€™s on a tour that you must try to catch, regardless of the stratospheric ticket prices. Last night he wore faded blue jeans without a belt, red sneakers, seersucker sports coat, white shirt, and bright red tie.

Most of the time he holds his eyeglasses and squints into the audience. Occasionally he makes eye contact, Mister Magoo style, with quirky facial expressions to match.

His monologue is intense and non-stop, stream of consciousness style, with unlimited segues and round trips. Garrisonâ€™s speaking and singing voice is magnificent, perhaps because he quit smoking.

He mentioned his mother, his wife, his child, and his extended lifetime family, in addition to the oddballs from northern Minnesota fantasyland. He explained how he created his own radio persona and where he got most of his thematic material.

Garrison takes the long view of his adopted Lutherans. Nobody is special. Get over it. Be yourself. Take life as you find it, knowing it will be unpredictable.

His recent years of radio humor and music were not as profound or entertaining as during his first decades. No matter now. Heâ€™s on his own. Go see and hear him. Youâ€™ll be glad you did.