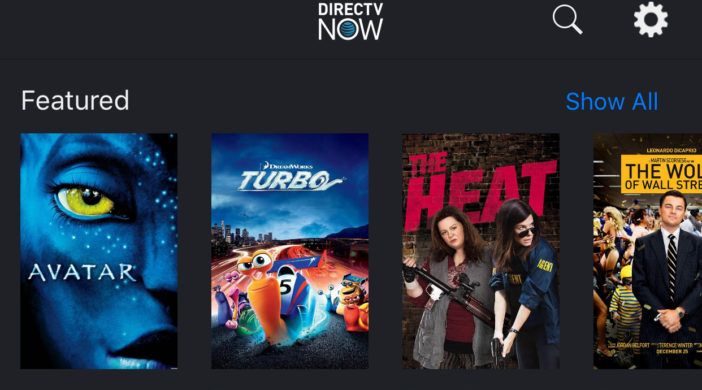 On paper (or screen), AT&T’s new DIRECTV Now streaming TV service looks like a strong competitor to other live Internet TV services, with a good channel-to-price ratio and compatibility with a range of devices. A limited-time offer currently lets people sign up for the 100+ (currently 110) channel Go Big plan for $35 per month instead of the normal $60 per month for that level. The reduced price for the Go Big plan will be honored as long as subscribers don’t change plans or cancel service.

DIRECTV Now is essentially a streaming equivalent to cable TV or the traditional DIRECTV satellite service. It has a bunch of live channels, the number of which depends on which plan you pay for, and some on-demand content (the way everyone watches video now). This is a product aimed squarely at would-be cord cutters, people who are tired of the cost and hassle of traditional cable or satellite TV and their requisite boxes and upward trending monthly bills. Streaming TV over the Internet means no installation appointments, no returning hardware to a service center when youâ€™re done with it, and potentially lower costs, depending on the competitiveness of the market and the channel-bundling creativity of providers.

In general, everything about DIRECTV Now sounds great, and AT&T has done their best to generate excitement before, during, and after rollout. The actual product, however, is a little less perfect than I was hoping it would be.

I stumbled across a video review of DIRECTV Now on YouTube that proclaimed it to be not only the best video streaming service, but satisfying and comprehensive enough to render Netflix and Hulu accounts redundant. The only way I can characterize that claim is to call it the lie that it is. DIRECTV Now in no way replaces Netflix, Amazon Prime Video, or even Hulu. If you currently use any or all of those services, you’ll still want to even if you choose to subscribe to DIRECTV Now. Yes, all of them stream video over the Internet, but the big three are focused solely on on-demand, anytime video, while DIRECTV Now as it currently is best serves people who want scheduled programming. Itâ€™s really aimed at meeting a different need.

DIRECTV Now can be watched on iPhone, iPad, and Apple TV. In-browser viewing is available on the Mac as well. It appears to require Flash, since it doesnâ€™t work in Safari for me (I donâ€™t have Flash installed on my Mac). However, it will work in Chrome regardless, since Chrome contains its own sandboxed version of Flash. (It is rumored that Chrome will discontinue this capability.)

The iPhone and Apple TV versions of the app are fairly similar in concept, except the Apple TV version tries to function more like a standard cable or satellite television experience in that live TV is almost always playing full screen. The exception to this is if you actively choose to watch some on-demand content or go into a menu or guide view. On iOS, live TV can be set to play automatically on launch, but youâ€™re essentially presented with a Netflix-like view of your watch list, currently playing live TV programs, and other program categories on the home view. Right off the bat, itâ€™s easier to find content and see your options on the iPhone and iPad version of the app as compared to the Apple TV approach.

The most attractive mode for watching DIRECTV Now would logically seem to be on the Apple TV, but the iPhone version of the app actually provides a better user experience. When youâ€™re watching an on-demand show on the iPhone, you can grab the scrubber and jump ahead, just like with any other video in the universe. The downside is that you may be forced to watch up to five commercials before the content starts playing again. On the Apple TV, however, there is no real scrubber â€“ you can swipe right to left on the remote to scrub ahead a few seconds, but thereâ€™s no way to control it. In order to get to another place in the current video, you have to use fast-forward and rewind controls. I wish I were kidding. You can fast-forward at up to 16x, but the controls are clunky and awkward and even that speed is too slow when you just want to jump ahead.

At one point when trying to finish a back episode of Designated Survivor on the Apple TV, for some reason the app thought I was near the beginning of the show, when in fact Iâ€™d watched all but about five minutes. In order to get back to my spot in the program, I had to zoom ahead at 16x, watch five commercials when it hit a commercial break spot in the video, zoom ahead at 16x again, watch five more commercials, and on and on and on ad nauseum until I finally gave up. I honestly think I spent close to 20 minutes trying to get to the last five minutes of the episode and never made it.

Itâ€™s a terrible, no good, very bad user experience. I had to be talked down by a family member from rage-deleting it from my system and canceling service immediately, it was so infuriating. Itâ€™s like AT&T decided to pretend the past 20 years of video playback UI development never happened, and you as the subscriber are supposed to play along, as though youâ€™ve just woken out of a coma and donâ€™t know any better.

DIRECTV Now on the Apple TV compounds its user interface sins by making a mess of the already suboptimal Apple TV remote experience. Sometimes you swipe up to get rid of an overlay, sometimes you use the menu button, sometimes swiping right to left does one thing, and sometimes it does another. Getting access to the video playback controls while watching an on-demand program is awkward at best, and then the controls will just disappear while youâ€™re in the middle of trying to do something like increase your fast-forward speed. Nobody at AT&T has ever used this product, or else they really just do not care about their customers.

There are some other strange and disappointing aspects to using the service. I found that although their website let me create my account using a 32 character password, when I tried to log back into it later, it yelled at me for the same password being too long. Call me crazy, but perhaps the same password screeningÂ algorithms shouldÂ be applied for both new and returning customers.

Also, DIRECTV Now only allows two concurrent streams at once â€“ that is to say, if you (and/or family members) are trying to watch DIRECTV Now on more than two devices, someone is going to get an error message telling them what a bad, selfish person they are. Two streams seems pretty low. Iâ€™m sure itâ€™s all contractual and that the studios insisted, but I also doubt AT&T fought them very hard on this one. It needs bumping up, even for people at the $35/month level.

Another fault that almost certainly can be laid at the doorstep of the studios is the fact that on-demand episodes of TV shows are almost all from the current season. Thereâ€™s basically no back catalog. Worse, DIRECTV Now seems to be required to wait several weeks after a given episode has aired to add it to the on-demand section for the show. For example, The Walking Dead just aired Season 7 episode 7, and The Walking Dead on-demand on DIRECTV Now has just one episode from this season â€“ Episode 1. Other shows exhibit the same drawback. Even Hulu does better than this for shows it carries. Itâ€™s better than Netflixâ€™s inability to get a season of something until the following season starts airing, but Netflix also generally offers all previous seasons in addition. If you plan on using DIRECTV Now for binge watching, youâ€™ll need to redefine the definition of the word binge to something less self-indulgent.

That failure of DIRECTV Nowâ€™s anytime viewing experience leads me to one of my biggest issues with the service: live TV feels like an anachronism to me now, like listening to a modem screech out a handshake or answering a telephone thatâ€™s hanging on the wall of a house. After living with only Netflix, Hulu, Amazon Prime Video, and YouTube for almost a year after cancelling our cable TV service, live TV feels almost hostile, as though the party whose needs are most important in this relationship is the service provider and not the customer. It’sÂ as if AT&T imagines that removing the cable box will make people forget they still have to rush to the TV at specified times instead of when it’s convenient for them. It’s a step back and it feels like it. It will continue to feel that way until the service has better on-demand options, DVR functionality, and can preferably offer new episodes for anytime viewing much closer to air date.

I commend AT&T and other streaming TV bundle services for finally waking up to the fact that the world is changing. By offering contract-free live TV over the Internet with lower cost bundles, theyâ€™re helping inch us closer to aÂ future in which people donâ€™t have to pay $100 or more per month for TV channels theyâ€™ll never watch. The devil is in the details though, and DIRECTV Now amplifies the pain of this transition period by reminding customers far too frequently why they learned to hate their TV providers in the first place.

Particularly unforgivable are the abominable Apple TV playback controls that refuse to let people jump around a program, and the lack of back catalog and DVR. Streaming television providers need to firmly embrace the future and give anytime playback and large video catalogs equal footing with live TV.

This is a beginning. Letâ€™s hope it doesnâ€™t take as long for things to dramatically improve this time.