Since the release of IBMâ€™s Via Voice (bonus points to you who know what I’m on about) I have been following the progress of speech recognition over recent years. Iâ€™ve been a long time user of Dragon Dictate from Nuance and I use voice recognition on my Mac, courtesy of Dragon Dictate 5, on a daily basis. 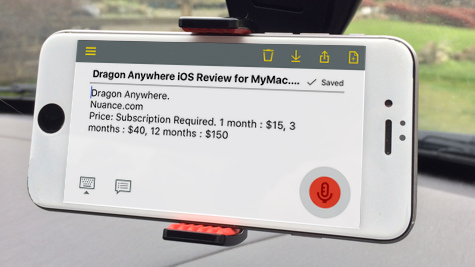 Since Nuance showed a tech demo of Dragon Anywhere earlier this year, announcing availability this fall, Iâ€™ve been waiting with bated breath to go hands on. That time has finally come.

Nuance make quite a few bold claims on their website including:

The good news is that Nuance delivers on these claims but each claim should really have an asterisk attached because thereâ€™s always a â€œhoweverâ€ with each of them!

How Good Is The Voice Recognition?

To give an idea of how good the accuracy rate and detection is for Dragon Anywhere let me use the desktop version as a comparison yardstick. Dragon Dictate 5 for Mac requires training to learn how you speak and recognise your voice. Training that takes the best part of 40 minutes. Dragon Anywhere requires no training and yet is amazingly accurate from the outset. 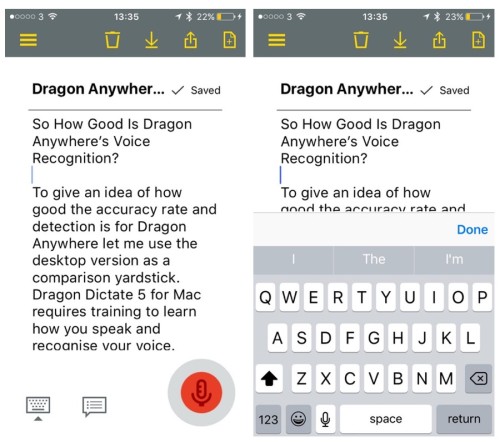 I have been testing Dragon Anywhere on Wi-FiÂ and cellular data connections, both indoors and outdoors. Iâ€™ve also tested slight ambient noise, and slight wind conditions, and the results have been nothing short of exceptional. Accuracy only takes a noticeable drop if there’s too much background noise, if I trip over my words when dictating (easily done), or if the sentence is grammatically awkward. This might seem limiting, but itâ€™s more just a real world constraint of all voice recognition technology to be fair.

Dragon Anywhere has one massive advantage over the built in iOS dictation provided by Siri, allowing continuous voice recognition whereas Siri is limited to just 30 seconds. You do need an active data connection and both share the same drawback that if your data connection drops, or times out, you will lose what you’ve dictated.

Just like the desktop version you can use commands such as â€œselect the wildebeest running across the roadâ€ and itâ€™ll select that phrase. Using commands does have a touch more lag to it than normal dictation.

Any time spent learning the plethora of commands will be time well spent, not only in terms of productivity but because they are cross compatible with the desktop version of Dragon.

Help is very comprehensive and is broken down into segments from â€˜navigation around the appâ€™ to â€˜selecting and correcting any mistakesâ€™.

Perhaps Iâ€™ve been spoilt with online storage and document syncing. Being able to open a document, work on it, save it to the cloud and having it available immediately, seems to be routine today. So with Dragon Anywhere touting syncing abilities you would expect something similar. Right? Actually, not. 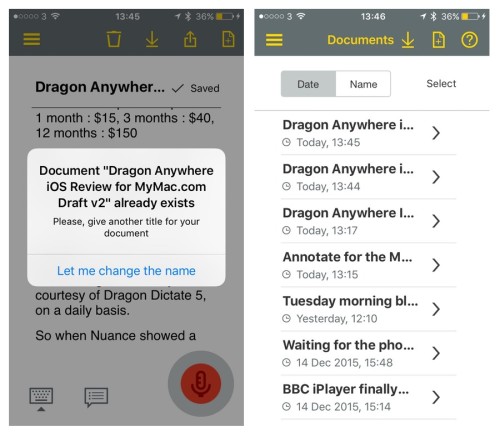 Starting with documents created within Dragon Anywhere, these are stored locally on your device. Thereâ€™s no syncing with its desktop counterpart, nor generally online. It is possible to upload documents to cloud storage solutions. However, if you upload (read: not save) to somewhere online and a file already exists with the same name, it doesn’t overwrite the file or notify you a file with that name exists. Instead it uploads another copy of the file with the same name appending (1), (2), and so on at the end of the filename.

Whilst you can see the numbers added to the end of the filename on the desktop version in Google Drive, for example, on mobile it truncates the file name, making it impossible to see the suffix. As you’re working on a mobile devices then itâ€™s fair to assume you will have this issue regularly.

Importing doesn’t fare much better either. If a document exists locally with the same name, you are given a chance to rename the file, but when youÂ look at the image below, determining which is the original and which is the import is a challenge! Switching to landscape mode helps, providing the filename fits the screen. 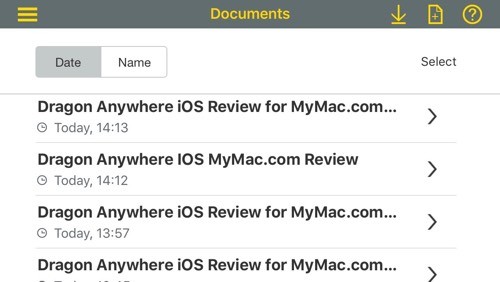 Can you tell which one is the original file and which is the file you downloaded and added something to the end of??

Given the messy and inconsistent document handling, I have found myself resorting to emailing copies of documents to myself. We all hoped that was over a long time ago.

Despite Dragon Anywhere being .docx, .rtf,. rtfd and .txt file formats, there is a slight problem. The formatting, aside from line breaks or paragraphs, is completely stripped. So before editing that carefully prepared Word document you probably want to think twice.

This is perhaps a limitation of iOS, but itâ€™s a shame that Nuance (makers of Dragon Anywhere) neglect to mention this anywhere.

The keyboard is always at hand for editing as normal and if you have any auto texts created in Dragon Dictate 5 for Mac the good news these are carried across. Â Auto texts are shortcuts for text snippets. For example I can say “email sig” and it will put my entire email signature in line. 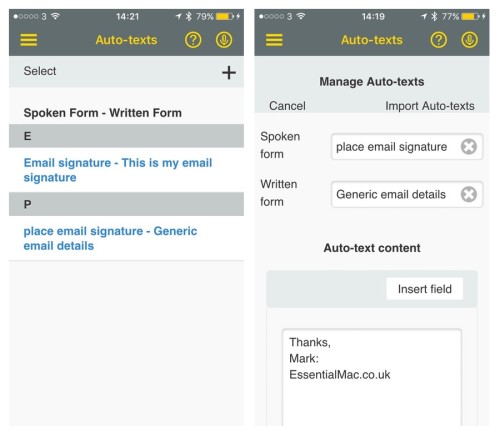 Sadly theres no back button to go back to the list of auto texts. Once saved you have to tap the hamburger menu at the top, tap auto texts: 3 taps to go back to a previous menu instead of 1.

If you ever get stuck on what to say there is an incredibly comprehensive help system on tap, broken down into nicely digestible sections, 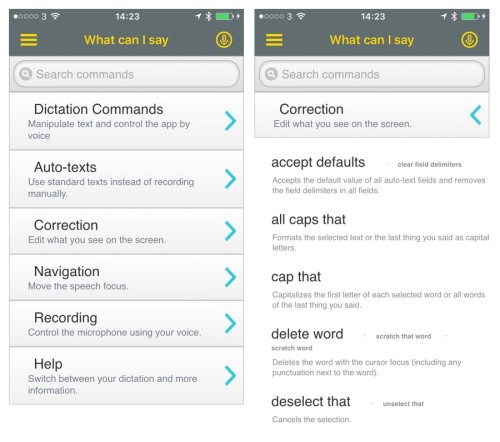 A lot of these foibles would be easily forgiven if the pricing of the app was somewhat reasonable. Whatâ€™s reasonable is in the eye of the beholder but with prices starting from $15 per month this seems quite hefty.

Putting this into some perspective I can subscribe to Adobe Cloud and get that behemoth known as Photoshop CC for $17 per month (12 month plan required).Â You can get Office 365 from $7 a month.Â Siri comes free regardless of its limitations.Â Cortana has baked in integration with Onenote for free.Â Google Docs also has an add-on allowing for dictation as well for free.Â Mavis Beacon Teaches Typing ($29 lifetime purchase) can teach you how to type.

As a technical achievement in regards to accuracy and speed of translating the spoken word into the typed form, Nuance have excelled, making me wonder why I have to spend 40 minutes training the desktop version to get the same accuracy. Given how good the voice recognition part of Dragon Anywhere is, itâ€™s all the more a shame how clunky is the handling of documents. Document handling is nothing better thanÂ appalling, essentially ignoring all we have come to expect in terms of working and syncing documents online.

Then thereâ€™s the pricing, which is aimed squarely at the corporate market. Itâ€™s a boldÂ decisionÂ to go into subscription pricing, but, because of the dealing with documents, the product just isnâ€™t good enough orÂ convenient enough to justify those amounts.

Having waited for Dragon Anywhereâ€™s release with such anticipation, I found it to be a disappointment. As good as the accuracy is, itâ€™s not worth the trade-off in terms of effort needed to upload, download and manage files in a obsolete way. All of which make the current pricing too high for me, and probably for all but the most dedicated of users. This is a shame as the voice recognition is excellent, but the product is let down by the rest of the implementation.

I would stretch to give the Dragon Anywhere a MyMac Review Rating of 6Â out of 10Â on a day when the sun is shining and the birds are singing. The software serviceÂ isnâ€™t terrible but it isnâ€™t great either.