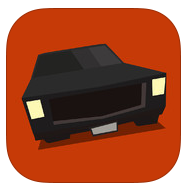 So here’s the premise. Take a car with no brakes and an accelerator stuck to the floor in a parking lot filled with obsticles. Now add insane police that have absolutely no sense of self-preservation when it comes down to their one goal…to get you. That’s the basics for an iOS game called Pako by Tree Men games.

The graphics for the game are nothing to write home about as are most games based on the Unity platform, but sometimes simple works better since there’s less distractive eye candy getting in the way. The controls couldn’t be easier, just tap onscreen to make the car go left and right and here’s the first problem I had with the game. As the car twists and turns, it’s easy to forget which way you’re going and hit the wrong control by mistake. It would have been better to offer an option to keep the orietation of the car at a single angle and have the environment twist around instead. This doesn’t mean that it’s impossible to play longer than say 30 seconds (all I’ve managed so far) which is based on high scores (or really how long some have managed to survive) posted for each level over at Tree Men’s website. Speaking of which, there are 5 different levels. Each one with different challenges and vehicles. 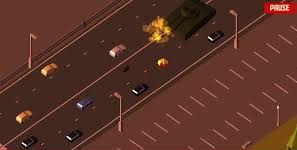 A shopping mall parking lot with tight spaces and parked cars blocking your path. A suburban neighborhood in a fast car and little room to maneuver. A cemetery in a station wagon where the only question is, how long will it be before you join them. A highway in a bus. Lastly, what looks like a version of Â Tieniman Square in a rickshaw, yes a rickshaw…and tanks than join forces with the ever-present police cars.

The music which is slightly different for each level get’s annoying quickly, but fortunately you can turn it off in the settings. The sound effects otherwise are ok but pretty similar no matter what vehicle you’re in or how you get killed (by exploding mostly). With a couple of tweaks, this could be the perfect mindless game for those tired of the endless runner games that everyone was into last year, but really for 99 cents? It’s a worthy addition to a gamer’s iOS device. I took off two points for annoying music and a control scheme that way too often got me killed too quickly.

Can you win this game? No. Can you beat this game? No. Will you make to the top of the leaderboards on Tree Man’s website with some scores over an hour long? Probably not, but you most likely will get a lot of enjoyment out of it and I applaud Tree Man Games for including so many levels without the dreaded in app purchases.