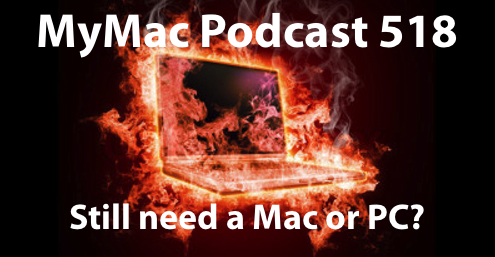 What do you use your Mac for? Or better yet, can an iPad do it as well? Guy and Gaz take a look at what most people use computers for and if they could do most of it on something simpler like an iPad. They also announce the winner of Boinx Softwareâ€™s Fotomagico, Gazâ€™s use of Apple gear while on vacation, and Guy simplifies his home network.

Links:Guyâ€™s App Pick:Â PakoÂ by TreeMen Games. .99 in the iOS App StoreHow long can you last in a parking lot with the foot permanently down on the accelerator and an unending swarm of cops willing to sacrifice themselves to get to you? Pako will let you find out. Just two controls (left and right) and SO many obstacles in your way? Can you eventually escape? No. Can you ever truly win? No. Is it an incredibly fun waste of time? Most certainlyGazâ€™s (not so App) Pick:Â 360 PanoramaTake stunning 360 panoramas everywhere. 360 Panorama turns your iPhone, iPod Touch, or iPad into a full featured 360 degree panoramic camera. Easily capture immersive panoramas in seconds and instantly share your 360 view with the world. Simply pan the camera and watch as images are stitched seamlessly. 360 Panorama captures the scene in a way you never could with a traditional camera.Peopleâ€™s Pick: Link to Dorothy Yamamoto’sÂ visit to the Petersen Automobile MuseumÂ which she did in the copy of Fotomagico she won in the last contest.