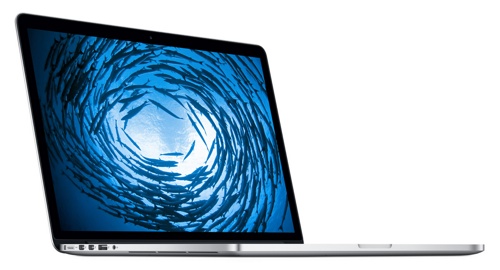 It was a tough decision.

Do I buy a MacBook Pro during Appleâ€™s Back to School promotion and get my son’s education discount plus a $100 iTunes card? Or do I wait for the new MacBook Pro to be released later in the fall?

I researched, I asked my fellow writers on MyMac.com, I reached out to the 3 Geeky Ladies Google+ Community (please, join us, by the way!) The consensus was to wait.

Finally, on October 22, 2013, the new MacBook Pros were announced. And I was disappointed.

I knew what I wanted: 13 inch screen, 8GB RAM, 750GB HD, just like the 2012 models, only with a Haswell processor and Retina screen. But those were no longer available. The base model was 4GB RAM, 500GB HD. Sure, I could upgrade the RAM and HD, but I would be buying last yearâ€™s MacBook Pro. The new modelâ€™s had the Retina display and better processors, but no hard drive as I knew them. Now all MacBook Pros had solid state drives (SSD) that were much more expensive.

How could I justify spending close to $2000 for a laptop with less space AND no optical drive? Yes, Iâ€™m one of the few people left on this earth that burns CDs every now and then. Plus I watch DVDs on my computer. The price difference would be about $500, not exactly chump change.

Now you can see how this was a tough decision.

After much internal debate I laid out the facts to my non-technical husband. I was honest with the pricing and how SSD is actually preferable and faster than a regular hard drive. He felt it would be better to pay more now and get the latest and greatest. No sense in buying last yearâ€™s model thatâ€™s outdated even before I buy it.

I knew I married him for a reason! 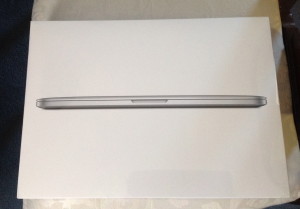 The speed difference is amazing! To be able to open multiple web pages in a matter of seconds makes my heart sing! And the Retina screen is just gorgeous!

Since I still have a fully functional 2008 MacBook I can use that optical drive if I need it, so I donâ€™t miss it on this MacBook Pro. Spinning beach balls are still a problem with iTunes, but I think many people started having that issue with the iTunes 11 update. 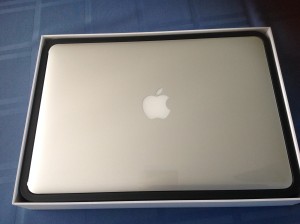 Mavericks is a big jump from Snow Leopard so Iâ€™m still getting used to new behaviors, like no more Save As in TextEdit, where Iâ€™m writing this article. I havenâ€™t opened GarageBand or iMovie yet; surprises still await me.

I admit the transition was a bit bumpy; I migrated my data over and a few applications, like Entourage for my ISP mail, did not play nice. With the help of wonderful people from MyMac.com and Twitter I was able to get things sorted out and settled. Iâ€™m spending even more time in front of the computer, if thatâ€™s even possible!

It was a tough decision, but I made the right decision in the end.

(This article is cross-posted to the3 Geeky Ladies web site.)