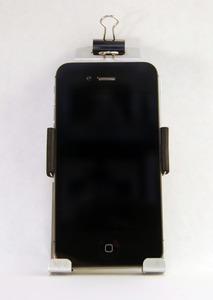 I was recently sent a a demo unit of The Norm from Insanely Great Products.

The Norm is a simple vent-mount iPhone 4 holder. It uses a standard binder clip to clamp on to the vent, and is shaped to perfectly hold an iPhone 4 (or 4S).

The Norm ships with two binder clips with which to mount it to your car’s vents. One has a foam liner and the other is a standard, small binder clip like you’d use to clamp a stack of papers together. In my testing, the Norm held better than other vent-mounts that I’ve tried in the past. Also, the Norm lies right against the vents, unlike another mount I used, which held the iPhone sticking about 2 inches out from the dashboard, making it easily jostled and knocked around. The Norm’s low profile prevented this, and it held in place nicely during my testing.

Although the Norm is not designed to be used with a case, I did have a slim case on my iPhone 4S. This kept the phone from fitting properly into the Norm until I removed the case. Despite this, even with the case keeping my phone from completely slipping into the mount, the Norm was able to securely grip my iPhone 4S, so I did not need to regularly remove and replace the case. The charging cable easily fit in the space for it at the bottom of the case.

The only thing I wish the Norm did better was provide a way to deflect heat from the car’s vents away from the iPhone, which heats up enough on its own and doesn’t need the extra BTUs during the winter months.

One plus which should not be overlooked is that Insanely Great Products is based in California, and the Norm is designed and manufactured in the USA â€” a plus, for those who want to buy American-made.