With Thunderbolt and USB 3.0 technology making their way into the market, many new products were recently announced supporting those technologies. Drobo made the announcement of two new products this summer that incorporate both USB 3.0 and Thunderbolt: the Drobo mini and the Drobo 5D. In this review, I will cover the latter. 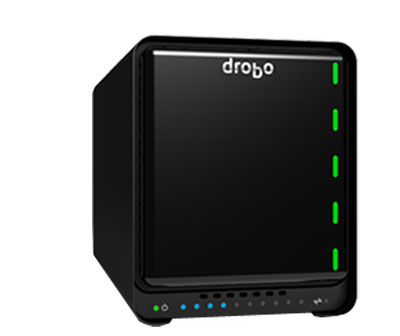 Introduction to the Drobo 5D

The Drobo 5D is the big brother of this new family of products from Drobo. It supports, like the Drobo FSÂ and Drobo S, 3.5″ HDD drives in a five bay configuration. While the Drobo S had eSATA, Firewire 800, and USB 3.0, the Drobo 5D proposes only the latest and greatest technology with a USB 3.0 port and dual Thunderbolt ports for daisy chaining. 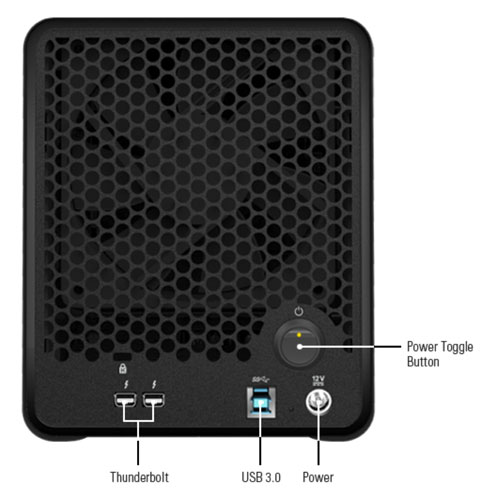 But that’s not all the Drobo 5D is offering. In the press conference this summer, Drobo made it clear that the two new devices have been redesigned from the ground-up. In the case of the Drobo mini, it is obvious, just by looking at its form factor. The Drobo 5D, on the other side, is using the same chassis model as the Drobo S and Drobo FS, but its guts have been totally redesigned. In other words, it is not a Drobo S with a Thunderbolt interface. 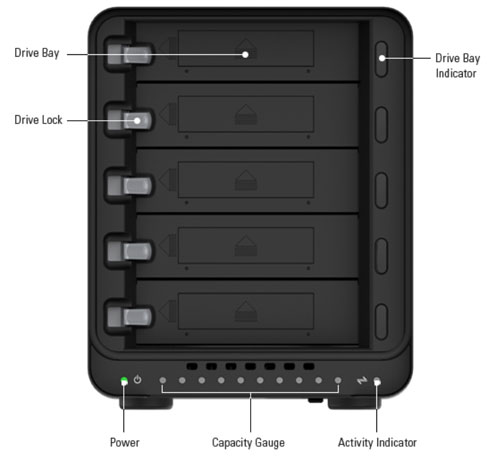 First of all, the Drobo 5D supports SSD drives. That is something new in the line of Drobo for professionals, which always targeted 3.5″ HDD drives for higher capacity arrays. Because the bays are still 3.5″ in size, and most SSD are in 2.5″ format, you will need a carrier like this oneÂ recommended by Drobo.

Drobo devices have always been able to mix and match different drive capacities from the beginning. With support for SSD drives, the new Drobo 5D extends this tradition by being able to mix HDD platter drives and SSD flash drives in the same bundle. I recommend you read the Which Drives Are Right for my Drobo?Â page, because not all SSD are supported in the Drobo 5D. 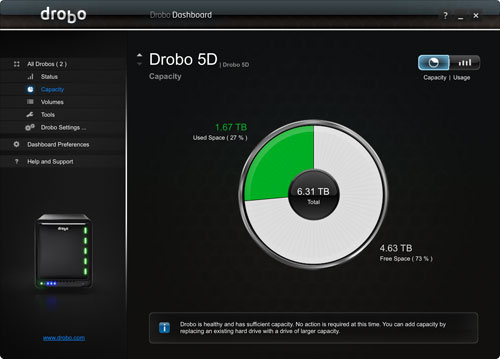 The technology necessary to mix SSD and HDD came first in the server oriented solution Drobo B1200i. Drobo calls this technology Automated Data-Aware Tiering. With twelve bays available, the Drobo B1200i can easily be configured for both capacity with HDD and performance with SSD. For the Drobo 5D and its limited five bays, Drobo designed a sixth bay named the Drobo Accelerator Bay. In this slot, you can install an mSATA drive, a standard technology introduced to the market for Netbooks and Ultraportables. The mSATA drive is a small circuit board card that slots at the bottom of the Drobo 5D. 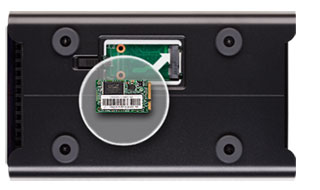 Transactional data are the small files you use often, such as thumbnails of your image or video library. The Drobo 5D is smart enough to analyze your data usage. It will optimize the transactional data as you work. If for example, you stop using some files, and start using some others more often, the Accelerator Bay and its HDD counterpart will be optimized with the data you use the most. It is important to notice that the Accelerator Bay drive contains a copy of what’s on your HDD, so you cannot lose anything stored on the mSATA device. I suggest you look at this videoÂ where Erik Pounds from Drobo explains the technology in a very straightforward way to understand. 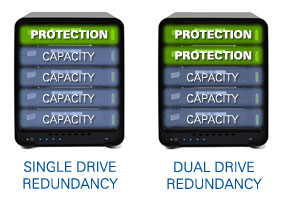 Like the other five bay Drobo, the Drobo 5D supports up to dual disk redundancy. That means it can support up to two simultaneous drive failures at the same time. Drobo also incorporates a battery inside the Drobo 5D. In case of power failure the unit will have enough backup power to commit the last transiting data to the drives before shutting down. I tested it by removing the power cable on the back of the unit, and it stayed on for sufficient duration. 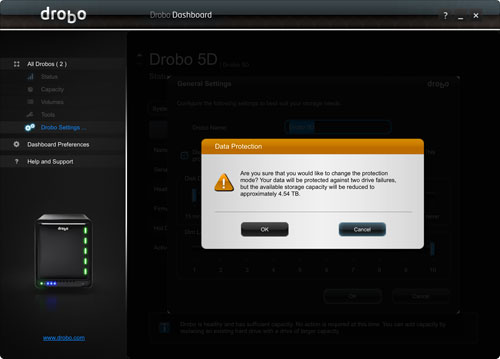 In the announcement press conference in July, Drobo also promised that the Drobo 5D would be less noisy than its predecessors. Because the Drobo 5D is designed to be used on a desk beside the computer, any noise reduction is an important factor. This was accomplished by installing a larger fan that spins less to evacuate the heat. I personally replaced a Drobo 2 for the Drobo 5D, and the noise difference is noticeable. I had nothing to compare the difference with numbers, but it is pleasing to hear in my working environment.

With USB 3.0 and Thunderbolt, the next question is how it performs. In one sentence, I’d say, really well. But continue reading if you are interested in the details.

Since it is the first Thunderbolt device I had in my hands, and the second USB 3.0, I did a few tests to evaluate performance gain of the Drobo 5D. Those tests may not be the top of the line technical analyses one can do, but considering my limited tools, I think I have captured the essential.

The tests were done on my 15″ MacBook Pro with Retina display, and I compared performance of different drive units I had in my hands. The first is obviously the Drobo 5D connected alternatively with USB 3.0 and Thunderbolt, packed with five drives that are Western Digital Green. I also had three external Seagate drives to compare with: a 750GB Firewire 400 desktop drive (3.5″), a 1.5TB Firewire 800 desktop drive (3.5″), and a 1TB GoFlex portable drive (2.5″) with USB 3.0. For another comparison of drive speed, I did the same tests on the MacBook Pro with Retina display internal SSD. 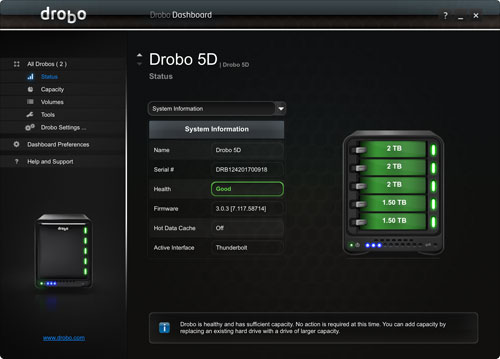 I made three tests to compare speed and real life usage. The first test was done using BlackMagic Disk Speed Test, that gave me a read and write speed on each device. I made two duplicate file tests: a big file duplication, and a setÂ  ofÂ many smaller files. The big file was a 3.38GB HDV video file encoded from my Canon HV30 with Final Cut Pro X. The set of smaller files was an iTunes library containing 445 files for a total of 3.41GB of data. I have compiled the results in the table below and created the chart associated with the data. 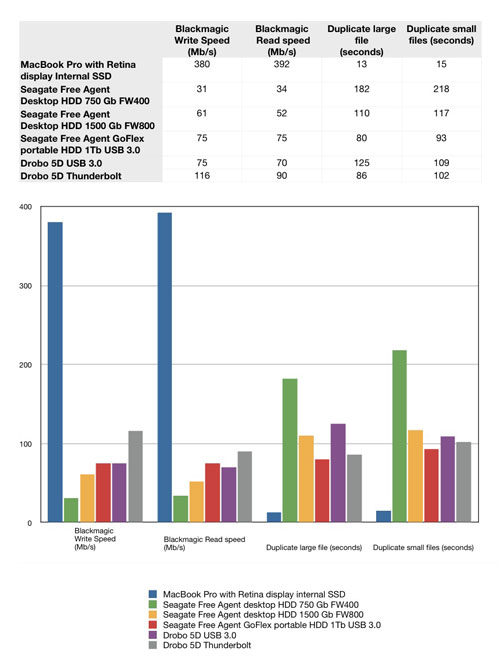 Overall, and with no surprise, the internal SSD of my computer beat them all. But when we compared all the Seagate drives with the Drobo 5D in Thunderbolt mode, it is clear that Thunderbolt has an advantage to any other device. In USB 3.0 mode, the Drobo 5D seems a little bit slower than the Seagate GoFlex portable drive. But after analysis, I realized that the drives in the 5D are green drives and are not really optimizedÂ for this unit. I also didn’t have an mSATA drive in the Accelerator Bay. This last point, all alone, could make a huge difference in the performance out of the Drobo 5D with either connectivity.

In real life usage, I can feel the speed difference of the Thunderbolt interface, from previous drives with Firewire 800. Copying a Final Cut Pro X event (roughly 3 hours of HD video) from the Seagate USB 3.0 drive to the Drobo 5D was clearly faster than doing the same operation to the Firewire 800 drive. Even if USB 3.0 devices feel a little bit slower than Thunderbolt ones, it is still faster than any Firewire device I know. Let’s hope Thunderbolt devices will become lower in price very soon, so we can have this power at a more affordable price. Clearly, I won’t invest any more of my money in Firewire drives.

Coming from a Drobo 2 to a Drobo 5D as my main device for storing huge amounts of data is certainly the best investment I made in storage devices in years. The Drobo 5D at $849 without any drive and not even a mSATA drive is certainly a most difficult purchase to justify. It comes with a USB 3.0 cable, as well as a Thunderbolt one. If we consider that a Thunderbolt cable from Apple is $50, the unit price could be seen at $800. But comparing offers from other vendors, such as the Promise Pegasus R4 4TB (4x1TB) RAID SystemÂ sold on the Apple Store for $1,099, the Drobo 5D compares well with the competition. And I did not even mention the unique flexibility and expansion simplicity that only Drobo offers with its BeyondRAIDÂ technology.

One thought on “Drobo 5D
Review”