Originally, this was going to be an FX Photo Studio Pro for the Mac review. However, the company approached me about reviewing the iOS version also and now you are getting two reviews in one.

So what are FX Photo Studio Pro and FX Photo Studio? Basically, they are photo editing and effects software for the Mac and iOS. While slightly different in some aspects and features, they basically fall into that category of apps that let you quickly apply effects to your photos like again, or color tinting, or frames, or dramatic flares, etc. You know what I am talking about.

As I said, the nature of the platforms makes these two apps slightly different, so let’s take them one at a time and start with the Mac version.

When you open the Mac version you are prompted to import a photo by drag and drop or other means. A great feature which I have seen lacking in other apps is iPhoto integration. You can import a photo directly from iPhoto from within the app. No need to have iPhoto open and drag and drop from there. It also integrates with Aperture or direct importing can occur from your camera. 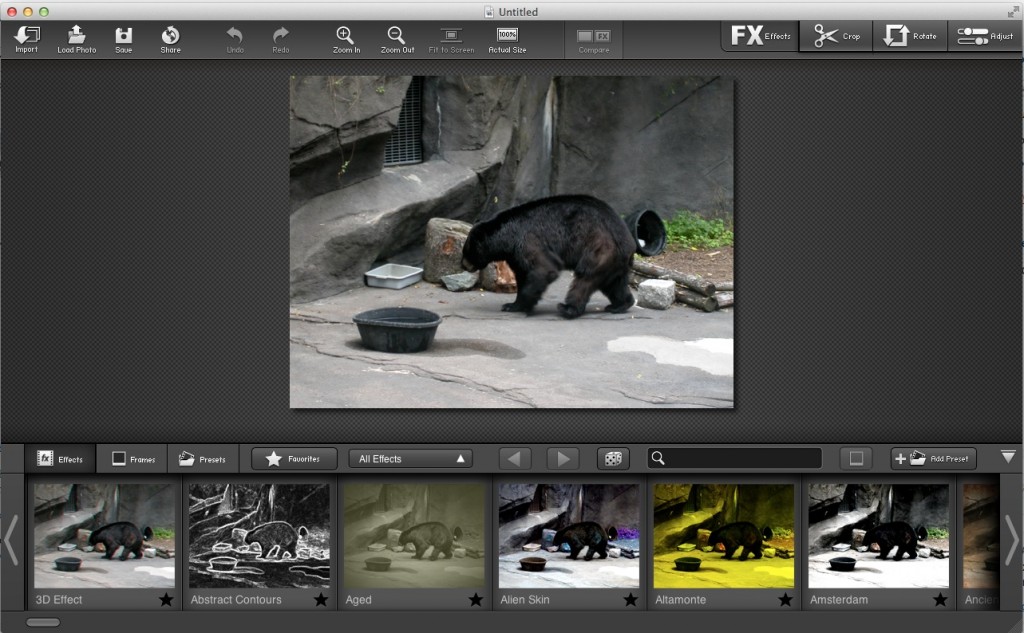 Once the photo is loaded you have your basic tools at the top of the screen and at the bottom you see an endless run of filters/effects. Endless translates into over 170 effects! The nice thing is you can shrink the amount of effects you see by choosing a category of effects from a pull up menu. Once you choose an effect you are shown controls for how much or how little of the effect to apply. You can also apply multiple effects. The big problem with this feature, and I will say this again with the adjustment tools, and the iOS app is that the effects do not live update as you move the controller like you see in iPhoto (for example). You have to move the slider to a “guess” and wait for it to apply to see if you like it. If not, you have to keep nudging the slider, waiting, nudging, etc. It would be much better to have live updating with the sliders.

In addition to effects there are 40 frames you can put on your photo. The frames can also be seen in categories for easier searching. The width of the frames are controlled by a slider. Like with the effect, no live updating.

If you make a combination of effects and or frames you can then save it as a preset to be used over and over again. Another nice addition to save time.

In addition to all of these fun effects you have your basic tools like crop and rotate. Plus, the Pro version has photo editing/adjusting tools like those in iPhoto and Aperture. These include exposure, brightness, etc. You can even use a mask and apply the adjustments to part of the photo. This is a great edition to the standard FX Photo Studio, however, I don’t know that these tools are worth an additional $30 over the standard $9.99 price. Plus, once again, no live updating. The lack of live updating makes it really difficult to smoothly get the exact look you want.

Once you are finished with your photo you can print it or export back to Aperture or iPhoto, or export it to Photoshop, Photoshop Elements, or Lightroom.

That’s about it for the Mac version. I’ll save my rating and conclusion for the end of the article.

On to the iOS version, or versions. I say versions, because there is an iPhone/iPod version and an iPad version. No universal version for both. I only tested the iPhone/iPod version. I would prefer to see on purchase working on both sizes of device. With that said, the iOS versions of FX Photo Studio are basically smaller versions of the desktop version with more. You get more effects, plus there is no pro version. You can also purchase additional effects at $.99 as an in-app purchase. Both versions have the adjustment features that are in the pro desktop version. Also, like the desktop version the iOS versions suffer from not have the live updating feature when you adjust settings. This really slows down an app which seems to be very slow in applying and loading effects on my iPhone 4. I would expect it to be faster on an iPhone 4S, but I did not have access to try.

One of the coolest parts of the iOS app is that you can paint an effect onto a photo. By doing this you can choose which parts of a photo should get a certain effect. This technique was actually pretty smooth and happened as I moved my finger. 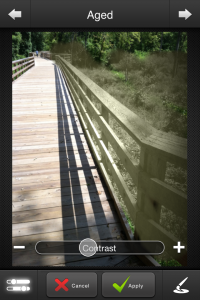 As you would expect, the iOS version can import from your camera library or the camera itself. You can also import from Facebook and photos stored on your device but not in the photos library. It can also export multiple ways and to multiple social media services. You can even send it as a postcard anywhere in the world! Pretty cool!

All in all, the FX Photo Studio apps for the Mac and iOS offer a nice set of editing options for your photos on your devices. However, the sticking point is the lack of live updating as you edit a photo and the speed of the iOS version (at least the iPhone/iPod version). Also, the Mac version is over priced to get the extra editing tools- especially when there are better and cheaper apps available like Snapseed and iPhoto (or just buy the $9.99 version for the effects and edit in iPhoto).

MyMac.com Rating for the desktop version 7 out of 10

MyMac.com Rating for the iOS version 7out of 10