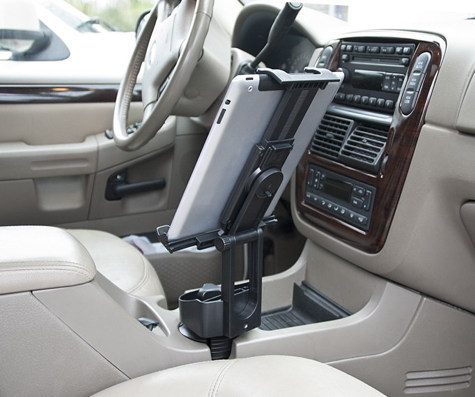 Bracketron’s tablet mount is a multi-part device that fits into your car’s cup holder. It does a nice job in spite of its complexity. In addition to holding your iPad, there are small compartments underneath for a mobile phone and some pens. Bear in mind that this is a review for iPad users even though the device is described as being universal.

The Cup Holder Mount ships in three parts that must be assembled. First is a tapered cone that fits into the cup holder. There is a large adjustment knob that when turned, expands the unit to fit the cup holder tightly and securely. An articulating arm slides and locks into that. The bracket that holds the iPad clips onto this arm and can be rotated and/or tilted.

You have to adjust the tension of the top and bottom supports that hold the iPad so that it is held securely; a trial and error process. Once these adjustments are made, the iPad can easily be inserted under the clamps and you’re good to go.

The iPad has a highly reflective screen and while the car in in motion, the arm can vibrate causing reflections to jiggle and dance. There are new laws, or ones being considered, in nearly every state regarding distracted drivers on mobile devices. Your iPad should only be used while you are parked (or it might be used by the front seat passenger)â€”but nearly irresistible temptation lurks. A harried road warrior could easily fall into the dangerous trap of glancing over to check something on the screen.

The thin, sleek iPad sits in the arms of the device that consist of large clamps designed to hold much thicker tablets. When the new iPad (or the iPad 2) is in place, the clamps extend a full 3/4 of an inch above the screen; ungainly at best. The good news is that your iPad plus its case might fit into the device.

The clamps that hold the iPad are separate pieces so Bracketron could presumably make a version of this device specifically for the iPad. That would be welcomed by the millions of iPad users used to Apple’s scrupulous design execution.

This device is a little clunky and a little complex but it does what it is designed to do and does it well. The big problem here is the temptation to use it while driving as your iPad is propped up within easy viewâ€”a serious issue.