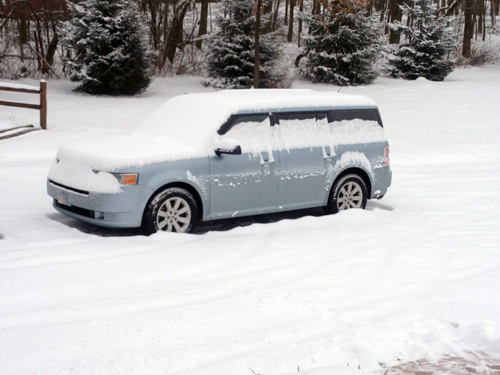 It’s always an adventure going to the Macworld Expo. At least it is the way I do it. It’s been said that the fastest way between two points is a straight line. I rarely take a straight line anywhere. I prefer to meander between those two points, stopping to smell the flowers or if the opportunity presents itself a good steak and cheese sub.

For the last few years my route to San Francisco from the Washington DC area has been through Ohio. Not because I HAVE to. I mean there are three major airports in the DC area, all of which have a multitude of flights to California that in most ways would be the easiest way to go. Well I’m not having any of that so instead I drive about 6-8 hours to my good friend Dave’s house along with his wife Joyce and spend the weekend with them. It’s a great way to deal with what I know will be a lot of upcoming stress. Dave, Joyce and I don’t typically do anything exciting. We just hang out and have a drink or two (OK sometimes three), visit with old friends I know from when I lived here in Ohio, and watch football playoffs. What else do we really need to do?

SPEAKING of the playoffs, here’s my picks. I think San Francisco will win in a shootout with the Giants and that Baltimore will find a way to harass Tom Brady into making mistakes and giving the Ravens a win. Based on my past success in picking football games this means it will probably be a New York Giants vs New England Patriots Super Bowl. None of this means anything of course to this article, but I love talking about football even if I am woefully ignorant on the subject. I mean that never stopped me before has it? Back to the subject at hand.

When most people think about Ohio in the winter, one of the first things to come to mind is the weather. A lot of snow and cold, but for over the last couple of Expos, the snow wasn’t here, but back in DC. Well apparently this year decided to be an exception. I left Virginia on Thursday the 19th and by the time I got into the west side of Pennsylvania, the snow was falling. Not wanting to show up at Dave’s door late at night I stopped over at a hotel. The next day there was over 3 inches of snow on the car and the roads were sloppy. I was quite pleased to make it Dave’s by the afternoon since another storm was coming in on Friday. Saturday morning showed yet another 6 inches of snow on the ground.

So here’s the story so far, a lot of bad weather, treacherous roads, and stinging cold. However to more than offset that is good friends, a warm house, great food, and if the weather people are right, pretty good conditions of Tuesday the 22nd when I finally fly out to San Francisco via Detroit from Akron. More to come after my next leg of the journey.

One thought on “Going to the Macworld/iWorld Expo (Step 1: Ohio)”