You assume the role of Henry Blake, a former officer of the English Royal Navy who was betrayed and imprisoned by those he trusted. Upon the day of execution you are rescued by a group of freedom fighters and escape to reap revenge and clear your name. 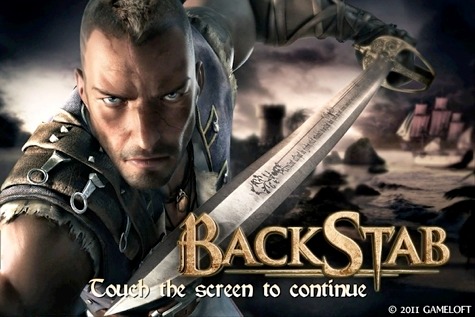 BackStab is an open world adventure action game, set in the 16th century, that is reminiscent of a mix between Assassin’s Creed, Grand Theft Auto, and the Prince Of Persia series. The elements of each of these franchises is visible. BackStab has enough unique gameplay and storyline that you will soon forget some of it is borrowed. You will truly bask in the experience of this new franchise.

The first thing you will notice is the amazing visuals. Both cutscenes and action sequences are beautifully rendered given a feeling of realism. The graphics are on par with a high quality Playstation 2 game. Cutscenes are a minor disappointment. The story is delivered concisely through onscreen text and spoken audio but the animation of the characters does not replicate the spoken word. Whilst you can live without seeing characters physically talk it would have enhanced the storyline ten fold if it had been implemented.

Despite being a portable game the scenes in each level were epic and amazingly detailed for a app that weighs in at a little under 600MB in file size and is a universal app. Many portable games use the same scenes repeatedly to save on production time and associated costs. BackStab does not suffer this limitation. The open world is vast and varied but where the developer lets gamers down is the foes all look alike and only the main characters you interactive with have individual personalities. 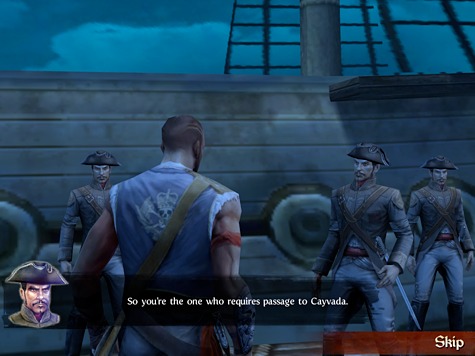 Controlling Henry Blake is one of the areas where this game shines. You are presented with a virtual thumb pad to the left of the screen for movement and control buttons for weapon use to the right of the display. You have the ability to change basic elements of the controls but you are unable to move the right hand buttons to an area of your choosing. The default location is appropriate and does not cause hand cramps even when playing for extended periods of time.

One negative was how easy it was. At no time did I feel immediately threatened by the oncoming herds of opponents. There is also no difficulty levelÂ  for more experienced players. There are time based and stealth challenges that require a little more skill. For the most part you can simply aim your character towards the enemy and repeatedly press the action button to engage and conquer. Even the large arena boss style battles were a case of attack, run, and attack again until you diminished your enemy’s health. 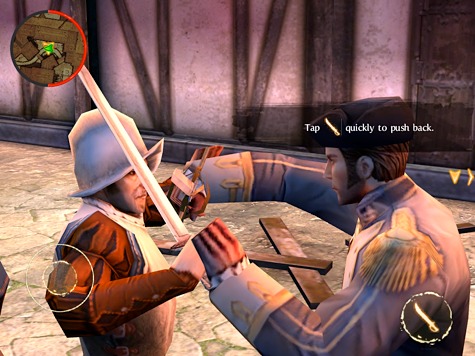 Thanks to a very useful map and important missions being highlighted you never feel as if you are lost in the open world environment. In many levels you can also commandeer a horse to traverse the wide open spaces between missions.

Missions are the main key to the game. Simply undertake someone’s request and upon competition you will be given the information you desire to proceed. Side quests are available but do not help your progression. Unless you are a completist or wish to build your in-game wealth in order to purchase additional weapons.

One of the most exciting areas is assassin requests. Creeping up from behind or above then triggering the Assassinate button throws you into a variety of graphic kill maneuvers that see your wanted level increase. Then it’s time to run. Hordes of enemies will flock to your location and unless you can elude them your character will die. There are safe houses spread throughout the levels and if you can reach them you will return to a non wanted level for a price.

Reaching the final stages you will experience some of the most polished platform gaming yet. It was then a disappointment that the final battle was rather easy and the story was abruptly cut with no real closure to such an epic storyline. No doubt GameLoft will look at continuing the franchise but no indication was given that this would be the case. 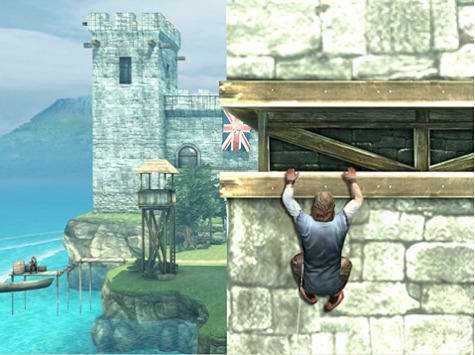 Whether on land, horseback, or jumping from rooftop to rooftop gamers of this genre will thoroughly enjoy themselves. The story and fact that you’re playing a game of this magnitude on a portable device is enough to keep you hooked and ignore some of the minor problems.

There are a number of disappointments. Repetitive characters, no physical voice acting, lack of difficulty options, or the occasional interesting graphic glitch are all present but does not limit the enjoyment the game has to offer.

Therefore, I am awarding this app a MyMac.com review rating of 7 out of 10.