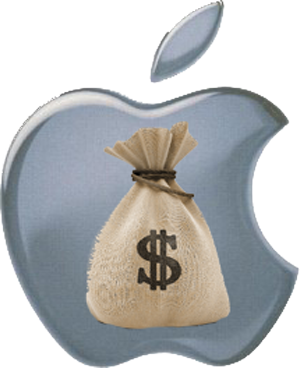 According to Reuters and posted on the Huffington Post, Apple gave six of its top executives around $60 million in company stock bonuses EACH after the company recorded a record revenue of $108.25 billion last fiscal year.

The executives include the chief of software Scott Forstall, CFO Peter Oppenheimer, and marketing lead Phil Schiller, and three others that the article did not name. Each received 150,000 restricted Apple shares that fully vest on 2016, or about $60 Million based on Friday’s closing share price of $400.24, or about $360 MillionÂ  going to just 6Â  people. These are not options that they have to buy, but restricted stock, that becomes fully theirs in 5 years.

Ok, it is Apple’s money, and they can do with it what they want. And they are one of the richest companies in the world as well, so maybe this felt right inside.

But, with the Occupy Wall Street protests and movement going on in such large numbers, and the push back by so many people to stop outrageous executive compensation, even at companies who’s products we trust and adore, and with most of Apple’s income depending on people in the 99%, in my opinion, this was a bone head move on Apple’s part right now. It just sends the wrong message at the very wrong time that Apple can no longer Think Different, and is, in fact, just another one of the 1% corporations, now with 6 executives more firmly planted in that 1% as well.Â  (I am sure their compensation already put them in the 1%!)

A quick look at the numbers of people pulling large amounts of money from major Wall Street Banks in reaction to large corporate bonuses should have told Apple that this was not the time nor the place to be giving out such large bonuses. Obviously, Apple does not care.

A company spokesperson for Apple said the stock grant was meant to ”reward them down the road” for their continued work in keeping Apple innovative.Â  So be it. But given the extraordinary salaries these people already make, I would think that a $5 Million bonus would be quite a generous reward to keep them at Apple. Did Apple really need to become Yet Another Wall Street Company right now?

OK, so Steve did not always have the right corporate strategy either (yes, he was stingy),Â  but I can’t help but believe that thisÂ  NEVER would have happened under his rule. So two new things for Apple under the new leader so far: They will start giving to charities (yea!) and they will start acting like a big Wall Street Corporation (boo!).

Sadly, this will all be forgotten soon by some, not even noticed by many, and given the love of Apple products by the 99% masses, it will be ignored by most. Funny how we can get angry at a $25 Million bonus to some hedge fund manager, causing us to march in the streets in protest, but $360 Million to executives at Apple, well, OK, but just don’t mess with our iPhone, iPad and Macintosh, and we will let it slide. Some might argue that Apple creates value for many while a hedge fund manager does not, but still, is this the right thing right now? Could this not have waited 6 months or so?

Personally, I will not forget, at least for a while, because I am saddened that in such a short time after Steve’s death, Apple is quickly becomming that Big Corporate Company that so many of us went to Apple to get away from in the first place. I find this action by Apple at this time to be disingenuous and outright thumbing its noses at its customers. But, as I am sure Apple knows, like so many others who may be upset by this move,Â  I love their products, so these bonuses, as angry as they make me, will most likely not stop me from buying my next iPhone, iPad, or Mac. And I think Apple knows it.

Welcome to the big new world of Apple Corporation.

2 thoughts on “Think Different … Or Not!”