As an amateur astronomer, I volunteer as an astronomy partner with a local elementary school science teacher in a program called Project ASTRO. Recently my teacher partner and I introduced her fifth grade students to the changing phases of the Moon. As part of this exercise, the students are teamed into groups and are given set of randomly arranged photographs of the Moon in its various phases and are asked to arrange them in the sequence they think the phases change. Since this is accomplished in the classroom, without being able to see the Moon, the students have to work as a team to best recall what they each remember about how the Moon changes phases. 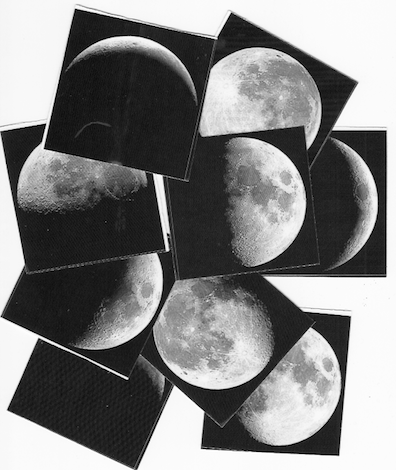 The students were given only five minutes to come to a consensus and lay out the photos in the sequence they arrived at. My teacher partner and I then visited each of the groups and reviewed their results. I decided to add a new tool to our exercise by bringing my first generation iPad and running the Moon Globe app to visually illustrate the Moon phase changes. It was truly rewarding to see how well this engaged the students and helped reinforce their understanding of how the Moon phases change.

I then zoomed in on two surface features, Mare Crisium “The Sea of Crisis” (Figure 1) and the crater named Grimaldi (Figure 2), to illustrate that these features remain fixed in their location as I made the phases change. This is often missed by the students when they arrange their sequence of photos, resulting in the Moon’s surface features erroneously being bounced from one location to another.

Even though these were just two of the many features this app provides, they worked very well with our Moon phase exercise. The students wanted me to show them more with the application, but there simply wasn’t enough time in the class period to do so.

During my demonstration I used the Earth telescope viewpoint to illustrate the phase changes. You can also select your viewpoint from above the Moon’s globe which allows you to rotate the Moon in any direction and display surface features on the whole globe. Yes, you can see the far side of the Moon. On the iPad, you can change from normal vision to night vision (black and red instead of black and white) or Red-Cyan Anaglyph 3D which allows you to view the Moon surface in 3D using the standard red/blue 3D glasses. View orientation (north up, south up, north up reversed, south up reversed) is also selectable. Your Earth location can be set either automatically by your IOS device location or manually by moving a crosshair to the desired location on earth. This option allows you to see where the relative Sun and Moon location are when using the sky compass function described later.

You can select labels to display terrain features, spacecraft locations, the distance you are observing above the surface of the Moon, or no labels at all. When you select either terrain features or space craft you can selectively search for a specific surface feature or space craft landing location and the application will zoom in on the location and display additional information and Web links relating to the selection. 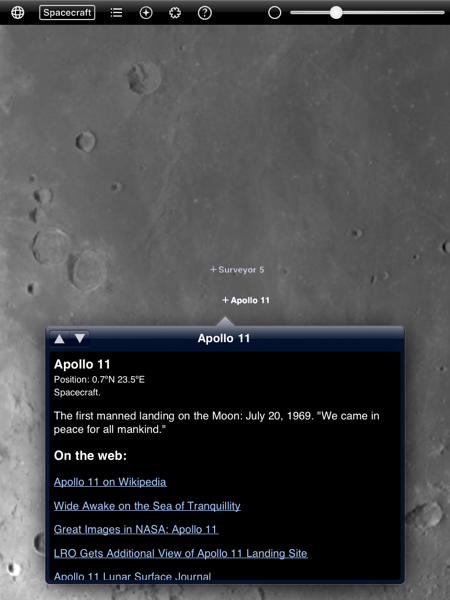 The app provides a sky compass display that illustrates the relative location of the Sun to the Moon in the celestial sphere reference frame. The display appears as a simple compass rose, centered on your screen, which orientates to the magnetic direction you are facing. Note the compass orientation works only with IOS devices with a built in magnetic compass. The outer circle represents the horizon and the middle circle represents 45 degrees above the horizon.

In this display the Sun and the Moon icons are positioned accordingly to their actual location in the celestial sphere. The icons change from solid to empty depending if they are above or below the horizon. One can set these icons in motion by simply selecting the View Time by tapping on the current time display and then slew the time settings forward or backwards. Just tap the “Now” button to stop and return to the current time.

The application is very easy to use and is fairly self explanatory. If in doubt, there is a complete set of instruction that can be found by tapping the “question mark” icon which brings up the How to Use Moon Globe along with the Credits and several helpful Web links. Moon Globe HD is only US$0.99 and also is available in a free version simply called Moon Globe. The HD version is optimized for the iPad 2 and provides sharper labels, improved rendering around the poles, and an updated surface normal map that provides better surface lighting in the 3D mode. I have both versions installed on my iPad (IOS 5.01) and my 4th generation iPod touch (IOS 5.01). The differences between the paid and free versions are very subtle so if you really can’t afford the price the free version works great. For me, US$0.99 is still a real bargain for this excellent app.

There is really nothing I can fault the application on. It does what it is designed to do and does it well in both the paid and the free versions and on both of my IOS devices. I am awarding the application a MyMac.com 10 out of 10.