Word Triangle is a game that will test your patience, general knowledge and ability to understand the English language.

The game can be compared to a crossword puzzle, but limiting it to this area would be a gross understatement. It also makes users think more than a challenging game of Scrabble. The biggest difference between this game and a game such as Scrabble is you will only be presented with a single letter to work from. This becomes a significant challenge when you have to answer the questions or statements for that specific line with up to six unknown letters. 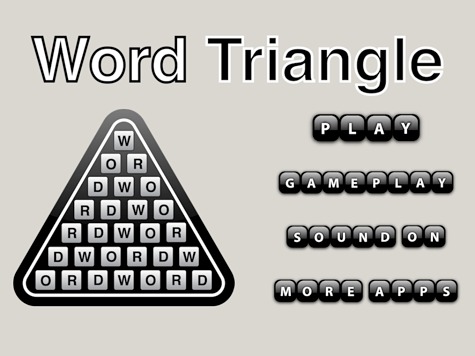 I would advise participants to have a dictionary and thesaurus by your side as you play this game. Even they in many cases may not help you to solve the problem. Word Triangle is indeed that challenging!

Users will fill the Word Triangle with correct answers in any order they desire. You can go from top to bottom or vice versa. You could even start in the middle if you wish. The one constant is the single letter in the alphabet which is your only hint as to what the answer may be. You will receive a list of statements such as “Purplish Red.” In this example your letter for this puzzle is G, so we can assume the answer is Magenta. This gets really entertaining when you come across the less used letters of the alphabet such as X and Z.

In similar puzzle games there is generally a slight progression of difficulty as you proceed. Well, not from where I’m standing. All the way from Puzzle 1 to Puzzle 150 my mind never took a break. In fact some of the early levels in the free version of the app were more difficult to conclude than those in the full version. Nevertheless, there was a consistency of difficulty across the entire series of puzzles.

The developer has chosen to use in-app purchasing as a way for consumers to upgrade to the full version. Normally I dislike in-app purchasing options but in this case it works seamlessly. At no time is the user impacted by notification messages relating to the purchase of the upgrade. No advertising is present in the free version either. On the “Select Puzzle” screen the developer has a simple and non invasive notification that an upgrade can be purchased. 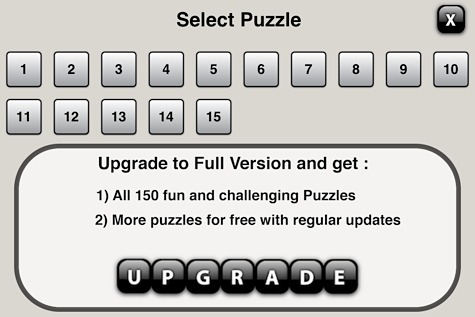 Users upgrading will receive quite a lot of additional content for their US$1.99. The content will expand from 15 puzzles in the free version to 150 puzzles in the paid version. The developer has also indicated that users who purchased the full version will also be eligible for regular free updates including additional puzzles to solve.

The game is delivered in a simple but elegant black and white view which looks lovely on both iPhone and iPad. The virtual keyboard used is different from that of the default option but is perfectly adequate and responsive. I did find when using the iPhone version that the letters were a little difficult to press.

Whilst this game will become straightforward to most people within a short span of time, the developer has decided to include a concise set of instructions on how to play the game correctly for any newcomers to this kind of puzzle solving genre.

Players simply type the word, including the preset letter, and when ready click GO. If your answer is correct it will be entered into the triangle. If not you will need to guess again. As there are no points awarded for correct answers you will not be penalised for an error.

One area I did not like was the Solve button. Yes, it allowed me to complete the puzzle but it was not done of my own accord. When you press this button you are simply given the word you are looking for. It is perhaps good should you have exhausted every possibility but I would have liked to have seen an additional question or statement which would have allowed the cognitive mind to further determine the answer. Perhaps a further letter being presented could also resolve this problem.

Another issue I had with the app was the inability to go back to a previous puzzle that had only been partially completed. Upon doing so the puzzle would be reset. I can understand why the developer has chosen this approach but I would have preferred to have all games stored in memory, until such time as I wanted to clear them and solve the puzzles again. 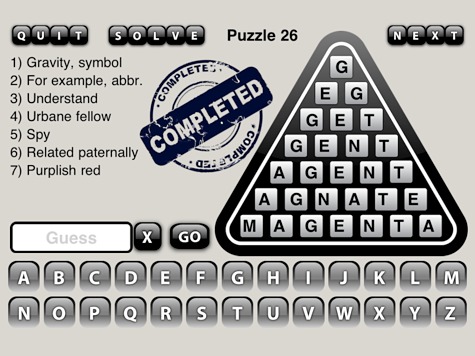 Anyone with a passion for words, phrases, and the completely random but challenging puzzle will enjoy this game without doubt. You will love it and hate it at the same time for the ingenuity it brings to the table, and you will expand your vocabulary with this app.

My only disappointments were in the solve button literally solving the problem, and not being able to go back to previous games without them being reset. With that in mind I am awarding this app a MyMac review rating of 8 out of 10.