Chuck & Friends is a delightful childrenâ€™s app. Being a father of two, both under the age of five, it is exciting to watch their faces light up as you present to them a new app on the iPad. That is exactly what happened when they were introduced to Chuck and his friends.

Despite Chuck and Friends being a popular childrenâ€™s television show, both my children had not previously known of the franchise. It was a great test bed to see how they would adopt to a new set of characters into their already over populated world of cartoons. My son absolutely adored the story and the excitement that the app brought to the table whilst my daughter proclaimed â€œitâ€™s a boys gameâ€. That was until she saw how much fun her brother was having.

The main story is delivered over 70 stunning pages. The graphics are bright and vibrant enough for any child to enjoy.

The story is split up, with the occasional video clip to further enhance the experience. A series of mini games allow children to locate letters to make the name of certain characters. Children will also be able to play hidden item matching games throughout the story to build or repair items. 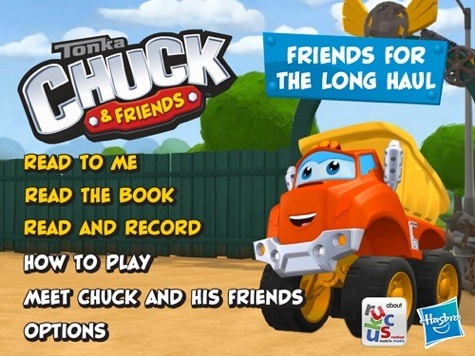 As you can see from the above image there are three main interaction areas of the interactive book which are presented in yellow.

Read To Me will simply read the book out loud, whilst highlighting each word as spoken. The reading of the book is full of energy and at no time does it diminish from bringing the characters to life. There is no automatic page turning in this option which is a shame as it requires your child to manually move to the next page and can therefore distract from listening to the story.

Read The Book will allow you to sit with your child and simply read, page by page, with no vocalization of the story taking place. In this version, you will still be presented with the in-story video clips. Hunting for items to build or fixing structures along with searching for new friends is also included. 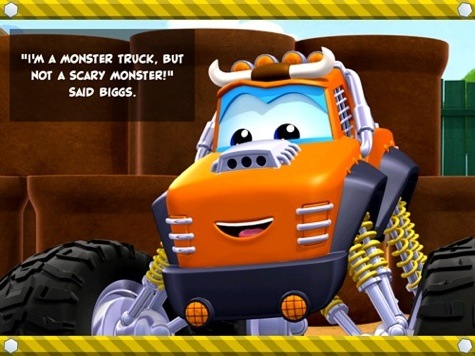 The third option is perhaps one of the most interesting as the application allows you to record yourself or your child reading the story in question. You can have a single recording per page which will last for 30 seconds and you can re-record at will. This is simply fantastic when trying to get children to read and it helps build confidence within them when they can hear their own voice telling the story. My daughter has decided to not follow the story word by word but to make up her own story with a series of sound effects to go along with the story she is telling. It certainly encourages imagination. In this version and the second version it would have been good to have the possibility of tapping on a word in the story as we were reading it simply to further highlight the word in question or even for the word to be pronounced prior to the child repeating the word for a recording.

Through all three options, you are able to navigate to any page within the story by adjusting the navigation bar which will appear towards the bottom of the display. Due to the way in which the story is told and the additional mini game at the end of interactive book I would advise you help your child to stay on track.

The How To Play option is a welcome addition to the app, as is the Meet Chuck And His Friends area. It certainly helped my children get to know the characters. Parents will need to read these areas to their children as their is no spoken word.

Another feature, which initially I didnâ€™t think much of but have grown fondness to over the last few days is the ability for your child to retell the story. Children simply need to tap and drag characters and events to the visual timeline. In order to receive the full benefit of this area to help with your childâ€™s memory ability you need to have unlocked all of the events and characters in order to use them in the storyline as shown below: 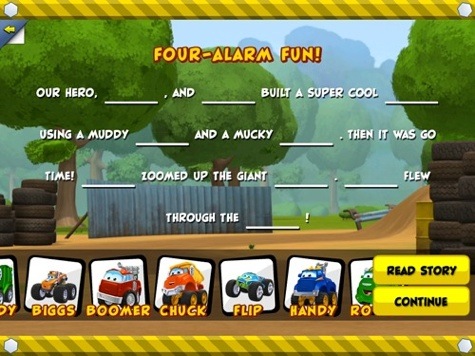 Once your child reconstructs or constructs a new story you will be able to have the story read to you. It is a nice feature which allows kids to explore different story lines and possibilities.

One area which I initially struggled with was when we finished reading the book and the kids were so excited they asked if we could read it again. On the second run I noticed when we hit the mini games that as we had previously completely them they did not reset. Adults know to go looking for the reset all activities button which was located in the options menu. A child lacks in this thinking ability and thinks the game is broken. It would be good if the activities would automatically reset or if there was a simple reset button when you reach each activity.

By far one of my favorite features with this app is that it is a universal app and as such a single purchase will allow you to download the iPhone/iPod Touch version and the iPad version. This is great for when you need to be on the run and perhaps all a parent has is their iPhone. It is also a nice gesture for families on a budget and I hope more apps, especially childrenâ€™s titles, will follow this lead.

Overall, this is a fantastic application for children and certainly the age bracket of 4+ is perfect for this title. It brings together a simple but appealing story with plenty of enjoyment and education value.

My only issue is the inability to easily reset the activities which has resulted in me giving this a My Mac rating of 9 out of a possible 10.