Last April, Adobe released the powerful Creative Suite 5.5 and the Photoshop Software Development Kit(SDK). The Photoshop Touch SDK and a new script capability in the updated Photoshop CS5.1 offer developers the tools to design applications that interact between the touchscreen device and Adobe Photoshop. To herald this event, Adobe released three apps for the iPad: Adobe Eazel, Adobe Nav, and Adobe Color Lava. Each of the three apps can interact with Photoshop CS5 or CS5.1. They are not compatible with earlier versions of Adobe Photoshop.

To use them in conjunction with Adobe Photoshop CS5 or CS5.1, go to Edit>Remote Connections, and select a Photoshop Server name and password. Click on the “Enable Remote Connection” box and you can transfer your work from the app into Photoshop. You must have your iPad and the computer with Adobe Photoshop on the same wireless network in order for them to interact with one another. I tested the three Adobe SDK apps with Mac OSX 10.6.8.

Adobe Eazel is a unique painting app that has some stiff competition. Brushes, Art Rage, Procreate, and Art Studio are tablet painting apps that are loaded with toolsets, layer options, and various art brushes. Eazel is similar to painting on a wet surface that magically “dries” after a few seconds.

The app uses a five-finger interface to summon the options. The thumb is the undo/clear/redo, then the remaining fingers are brush size, opacity, color, and settings. Although the app screen surface is clean and uncluttered, I found this interface to be annoying and clumsy. You touch all fingers on the screen then release all but the one finger that has the attribute you want to select. The thumb’s undo/clear/redo button continued to disappear which was frustrating when attempting to clear the screen. I found this to be counter intuitive, and changing options difficult to control. 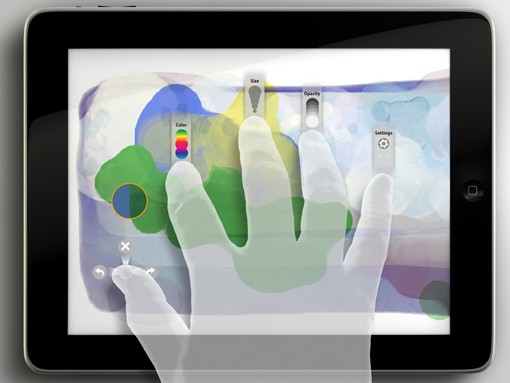 Adobe Eazel offers no layer support and only one undo option. The brush size can be altered from very small to large and is changed by swiping upward or downward. The color feature contains five wells of color and can be changed with the RGB color picker. The colors do not blend on the screen; painting yellow into blue will not make green. The colors merge into each other by opacity, not true color blending. This app offers a novel watercolor finger-painting effect but not much more.

When you are finished with a painting you can export it to the iPad’s camera roll, save a copy, or transmit it to Photoshop. Once transferred to Photoshop, the app does not allow the painting to be transferred back to the iPad. I found that on my color-calibrated iMac monitor screen, the colors were considerably brighter than on the iPad. 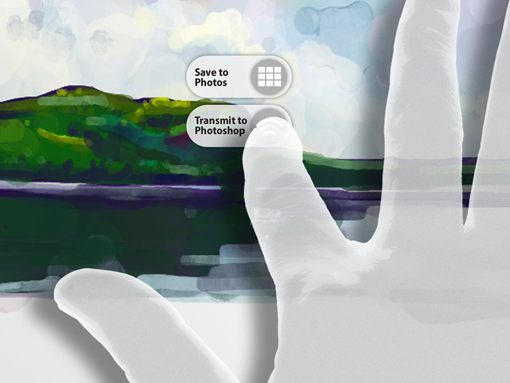 I appreciate Adobe’s concept with Eazel, mainly the ability to make a painting on the iPad then transfer the work to Photoshop for further consideration. However, this app is sorely lacking in intuitiveness and features and is a disappointment. This app feels unfinished and very amateur for a painting app. There are more robust and better painting apps for the iPad artist.

Adobe Nav is an app that acts like a Photoshop remote control. The user can cycle through screen modes, select a Photoshop tool, change the foreground color between black and white, and transfer images from the iPad directly into Photoshop. The app allows the user to make a custom Photoshop toolset of sixteen tools. You simply select the tool icon on the iPad screen and it is selected in Photoshop. After many years memorizing the Photoshop shortcuts and using my Wacom tablet, realistically I would not use this app for selecting Photoshop tools. 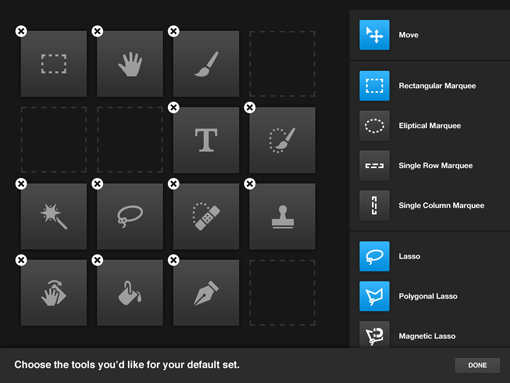 I did like the ability to transfer iPad photos directly into Photoshop. The app displays an image on the iPad when it’s opened from Photoshop, and Adobe claims the app has the capability to display up to 200 images. For a new document, the default resolution is 1024 x 768 pixels and there is not an option to change this on the iPad. I opened and transferred thirty images and found the app fast and responsive.

Adobe Nav offers the options of creating a new document, loading an image from the camera roll, or taking a photo with the iPad 2. The active Photoshop image is displayed on the iPad screen with a pulsating blue button. When a document is closed within Photoshop, it closes the image on the iPad but images are not saved on the iPad. 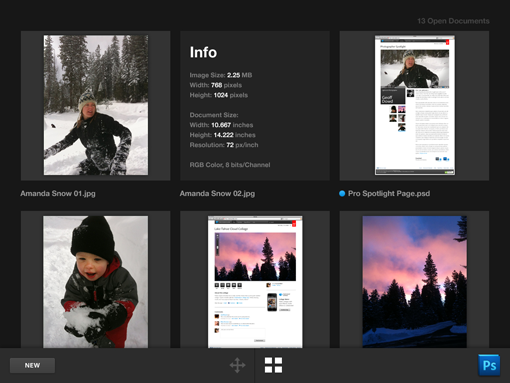 If a Photoshop user wants to utilize their iPad as a remote control, then they will find this app helpful. There is no capability to enhance or work on images on the iPad. The app is only capable of transferring documents, toggling screens and foreground, and selecting Photoshop tools.

I will use Adobe Nav to transfer my iPad photos to Photoshop as the transmission is seamless, but otherwise I can’t imagine keeping my iPad open to toggle screen modes or tools. I think this app could offer more in functionality and it feels underdeveloped for the experienced Photoshop user.

Of the three apps, Adobe Color Lava is the most intuitive. This app allows the user to make custom color swatches and up to 300 color themes. The color theme can be made by finger-painting or by extracting colors from an image. The newest update now allows iPad 2 users to take a photograph from within the app.

The color themes are grouped into five swatches with the ability to title the swatch and email the theme. The painting screen has a standard six-color palette as well as a white, gray, and black palette. With your finger, you select the color and begin finger-painting on the side palette. There is a smudge and color blending capability which is sadly missing from Adobe Eazel. The app also interacts with the Color panel in Adobe Photoshop. 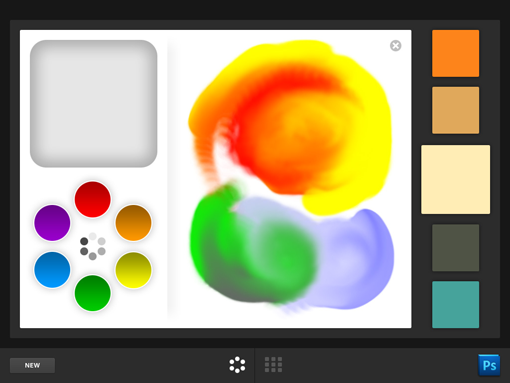 When the color swatch is tapped, it instantly becomes the foreground color in Photoshop. The color can be adjusted in the Color panel according to RGB and HSB (Hue, Saturation, Brightness) values. For designers, there is not CYMK or color calibration support. As with Adobe Eazel, the colors are brighter in Photoshop on a color-calibrated monitor than on the iPad. 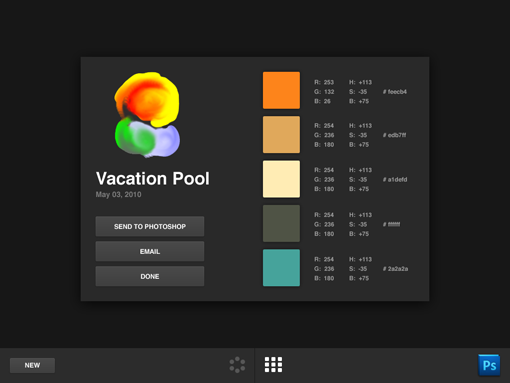 As this app is more akin to a painting app, it’s too bad you cannot save your painting creation as this is only a color blending tool. Again, the concept is intriguing but the execution is underdeveloped.

Adobe has created three tablet apps that extend the functionality of Adobe Photoshop CS5, but all three appear nascent in development. Adobe has a stellar reputation for creative software. With Adobe Eazel, Nav, and Color Lava, target audiences of photographers, artists, and designers are confronted with appealing concept applications that are lacking in finesse. Unless the Adobe team tackles their apps’ shortcomings, it may be best to wait and see what third-party developers create with the Photoshop Touch SDK package.