LightWake is an alarm clock for the iPad that gently wakes you up with soothing music and gradual light, like a sunrise. The sunrise duration can be set anywhere from 10 minutes to 60 minutes, during which time the screen gets brighter and the accompanying music increases in volume. In theory: a great idea. But not for me.

Reviewing some features of an application can be very subjective. Some people may love having many font choices, while for others, too many options is overkill. That’s how I feel about LightWake: some people will love the features, others, not so much. 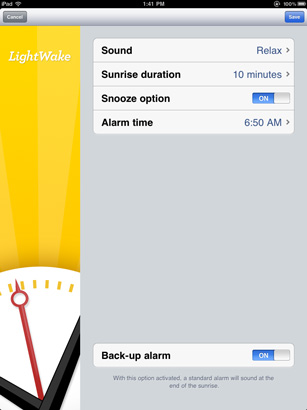 I need extremely loud rock music and a crane to drag me out of bed in the morning, unlike my husband, who only needs to hear the “click” of the alarm clock to be off and running for the day. On top of that, soothing ambient music has the opposite effect on me: it drives me crazy! Laying in bed one morning listening to ambient music on LightWake for 10 minutes put me in a foul mood; it’s just not my thing. 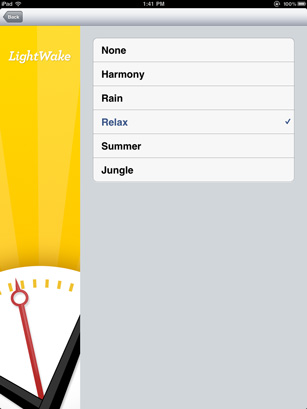 I explained the app to a few friends, and got to show the app to one of them. They said they wouldn’t mind waking up this way. In fact, the one friend who saw it said she would buy it if she had an iPad.

From an objective point of view, LightWake does what the developer claims: wakes you up gently. There’s a snooze button for people like me who like to hug their pillows a little longer, and a loud back-up alarm, just in case. LightWake needs to be running in order to work; there’s an activate button that darkens the screen for bedtime use. 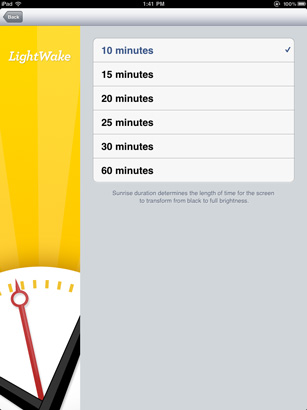 There are a few issues with LightWake. Even though the screen goes dark during activation, I felt it still had a faint glow emitting from the screen. Not enough to illuminate a room, but enough to allow me to see in the dark. My husband didn’t think it was a problem.

Make sure your iPad is plugged in while using LightWake, as it eats the battery. The first night I used it I woke up around 5:00 a.m. to a low battery (10%) warning.

One feature I’d like to see, even though it goes against the spirit of the app, is the ability to use our own music. If I could wake up to loud music I enjoy I may be more likely to use LightWake.

Because of the subjective nature of this app, I feel that giving it a rating would be unfair. The fact that it makes me crazy does not mean it’s a bad app; it just means it’s not the right alarm for me. For others, LightWake could be exactly what they’ve been looking for.

One thought on “LightWake
App Review”