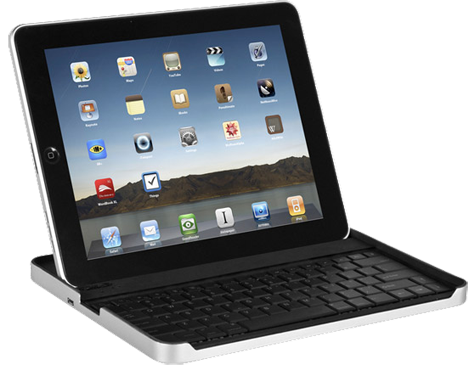 The iPad has turned out to be an enormous hit since its introduction in 2010, far surpassing what the estimates were for such a product. One of the things that has both worked for and against it has been the lack of a “regular” keyboard. Users have either loved the on-screen keyboard or have railed against it. One of the solutions that has popped up has been a keyboard linked to the iPad via Bluetooth connectivity. The ZAGGmate with keyboard case is one of those products.

The ZAGGmate with keyboard for iPad case is made from aircraft grade aluminum, providing a solid case that covers the front of your iPad and has been brushed to match the tone/color of your iPad. The actual keyboard section sits on the bottom portion of the case and is surrounded by rubber-type material that cushions the iPad as it rests face down in the case. You don’t have to be worried that the iPad will fall out as you have to pull the iPad out when you want to use it, the case grips it that securely. Now understand that while the front of your iPad is protected, the back of your iPad is not. A Â really nice aspect of the ZAGGmate is that you have your keyboard with you as part of the case that is working to protect your iPad. You don’t have to carry around an additional item that needs to be placed within a bag with your iPad and taking up space that could be used for something else.

The keyboard itself is a wireless Bluetooth keyboard, just like other Bluetooth keyboards but ZAGGmate has added special function keys that allow you to have control of your music, (F10 Back, F11 Play, F12 Forward, first key past F12 mutes the volume, next key lowers the volume, next key raises the volume) The escape key acts as the home button, double-tap and it acts to switch apps. F1 is the Search key, F2 controls the slideshow, F3 shows or hides the keyboard and F4 turns the screen off or back on. Keys F5 through F9 are there but are not set up for special function use. The one thing to really understand about the keyboard is that it sits down on the bottom of the case and that basically you will be typing by placing your fingers into the case, although ZAGGmate has graciously cut the lip of the case on the front so that your fingers would not have to type over the edge.

The first thing you will notice is that the keyboard comes fully charged. Syncing the keyboard to the iPad is a breeze; one simply goes to the Settings/General/Bluetooth on the iPad, turn Bluetooth on and turn the ZAGGmate on and then press the Bluetooth button. There is a status light that will begin to flash on the ZAGGmate and if you watch the iPad, it will show ZAGGmate as available. You select ZAGGmate and a code will appear; enter the code and you are now paired. After the initial pairing, you wonâ€™t need to enter the code any more.

Now the iPad can be placed in the case once you have raised the hinge that is folded and recessed on the back side of the unit. The iPad can be positioned in either the vertical or horizontal position in the case, based upon your preference. If you are normally used to typing with a regular size keyboard or a laptop size keyboard, you will find the keyboard on the ZAGGmate just a tad bit smaller. Personally, I am used to the larger keyboard/Macbook keyboard and it took some adjusting to get used to the size of the ZAGGmate as again, it is just a tad bit smaller than the keyboard on the iPad itself. I do find that my fingers at times still think that they are using a larger keyboard and forget what they are actually typing on. If you position yourself properly, you will find that typing is not that much of a problem, it is just adjusting to the differences. I let a fellow iPad user try out the keyboard and he loved it immediately, saying that it was just perfect for typing. 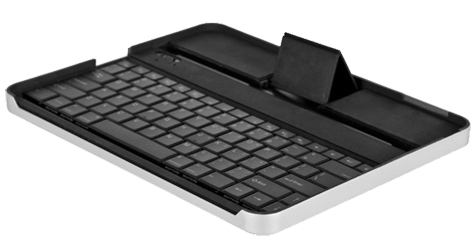 Having a keyboard to work with that has functional keys is a real pleasure. Not having to press down, move the magnifying glass to copy/paste or cut makes things so much easier. Just a reminder that the iPad, even with the ZAGGmate keyboard, is still not a Mac or a laptop. I donâ€™t have the ability to click on the Photos icon and then scroll through the pictures using the arrow keys; I still have to touch the iPad screen to do that. I can select songs when Iâ€™m using the iPod app by selecting a particular artist or album, then tap on the iPad screen for say the first song, then utilize the F12 key to go forward or the F10 key to go back. There are still limitations but at least this does make things a little bit easier to work withÂ  on the iPad. No, Iâ€™m not looking to make the iPad a netbook, just the ability to work within a more comfortable zone for me, being used to typewriters and computers during my lifetime. 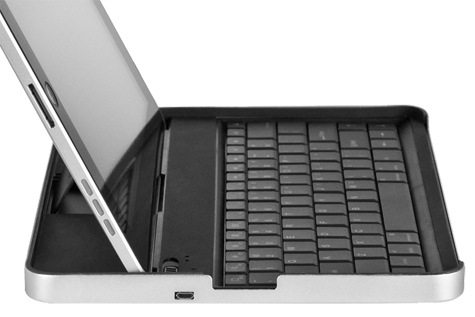 Regarding the battery in the ZAGGmate; I have been using the case now for over a month and I have not had to charge the keyboard at all. It comes right on when I turn it on, and the system is designed to go into a standby mode when not being used. Battery life on standby, per ZAGG, is estimated to be a couple of months in the standby mode. ZAGG does however make the recommendation that you charge the ZAGGmate overnight once a month just to keep things current.The keyboard, in the upper left portion, has the on/off switch; and also a charging light that turns off when the battery is fully charged and a status light that flashes when the battery is low or when pairing with the iPad, and only turns on briefly when you turn the keyboard on. There is also a Bluetooth button (recessed) that enables the syncing to the iPad, plus the status lights will blink until the sync is completed. I have used the ZAGGmate, left to do something else, left Bluetooth active on my iPad, came back a while later, turned the keyboard back on out of sleep and the connectivity was there within a couple of seconds.

One weak point that I found is the lack of information on the operation of the keyboard. ZAGG does include a small four-page folded pamphlet that explains how to place the iPad in the case, how to take it out, positioning the hinge, pairing via Bluetooth, special function keys (greatly appreciated), and a very brief explanation about the lights and buttons. ZAGG has, however, placed a video on the ZAGGmate website that clearly explains the setup and special function keys on the keyboard. Everything beyond that point is experimentation, as in are you able to utilize the keyboard the same way that you do on your Desktop or laptop. There are limitations even with the ZAGGmate keyboard and the iPad. For those users who feel more at home with a â€œregularâ€ keyboard then the iPadâ€™s on-screen keyboard, the ZAGGmate may just fit the bill.

Specs: aircraft aluminum case, 9.75 inches x 7.625 inches x .54 inches (deep), Weight: 12.8 ounces. The unit comes with a micro USB cable to hook up to your computer, plus four small rubber feet that can be placed on the bottom of the unit in the corners to help prevent scratches to the case. The battery in the unit is a 510 mAh rechargeable lithium polymer battery that is not user changeable.

All in all, based upon my use and its capabilities, I give the ZAGGmate with keyboard a My Mac rating of 8 out of a possible 10.

3 thoughts on “ZAGGmate with Keyboard
Review”