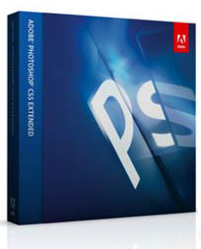 I first read about Adobe Photoshop CS5 last spring before it was released, and two things jumped right out at me (well, maybe three). They’re both real and make a difference, so I’ll cut to the chase: if you use Photoshop on an Intel Mac with Snow Leopard and at least a Core 2 Duo processor, you probably want this latest version. I did and still do.

When the official review copy showed up on my doorstep in a plain brown wrapper six months ago, I was ready to rock and roll. Unfortunately, life intervened, so here we are. By now every reviewer on the planet has copied and pasted from PR materials, tested and retested, and had his or her fifteen minutes of fame. For heaven’s sake, Donny Yankellow has a fabulous full review right here at MyMac! (see “Related Posts,” below.) All things considered, the “first look” video I contracted for would be silly at this point, never mind that I’ve produced three of them already using screen-casting software from hell (the one with the 68-page manual). My official reviewer status has gone the way of peace, love, and understanding, and the knee-breakers will soon be hunting me down for the DVD. I’m guilty as sin, with a target on my back! What then can I do for you, our faithful MyMac readers, and the Mac community at large?

Tell you what I really think, that’s what. So here goes:

This is the best edition of Photoshop I’ve ever used. While I’m by no means an expert, I’ve depended on Photoshop to produce Web graphics and manage my own photos for at least a dozen years. As for reviews, I’ve been writing about Photoshop since CS2, but this is the first version I could pay real money for. The number one reason is, it runs in 64-bit mode on Snow Leopard, woo-hoo! (I could point out that Windows PCs have generally supported 64-bit versions of Photoshop for years, but that would be uncharitable, and the only PCs I ever see are in the county library.) From the Adobe Photoshop FAQ page:

What are the advantages of 64-bit computing?
Those who work with extremely large files should realize noticeably greater gains in performance, in some cases as dramatic as ten times the previous speed. This is because 64-bit applications can address larger amounts of memory and thus result in less file swapping, one of the biggest factors that can affect data processing speed. (Requires a 64-bit-capable computer with a 64-bit version of Mac OS, Windows 7, or Windows Vista. Actual performance varies depending on amount of RAM, driver types, and other factors.)

(For an impressive rundown of documented time-saving benchmarks as well as a great food fight among commenters, please see this Adobe blog post by John Nack.)

The testbed machine for this review is last year’s top-of-the-line iMac, a 3.06 GHz Core 2 Duo 24-inch model with 4 GB of RAM and the latest version of OS X. No, 64-bit processing doesn’t do you any good with just 4 GB of memory, or at least that’s what they tell me—with 8 GB or more, you’re able to address GOBS of computational power—but my subjective impression is that Photoshop CS5 is noticeably snappier on this machine anyway. I have no idea why, but there it is: saving a photo simply takes less time. Maybe not by much, but enough to tell. (Thankfully, an upgrade to 8 GB of RAM is scheduled shortly, and I’ll post a follow-up.) In other words, even if you have an older, underpowered Intel Mac, the software will be good to go whenever you get around to buying a new one. It’s like when my old man was alive and gave me car-buying advice, namely, “Always get the V-8! You might not think you need the power, but it’s there.”

Which brings us to the second thing I noticed about Photoshop CS5, way back in the spring: Content-Aware fill! Heh-heh. When I saw that, I nearly died from software lust: just select a portion of your image with the lasso tool and choose “Fill” from the Edit menu. Pick the content aware fill” option, and your selection disappears, replaced by what Photoshop decides should be visible behind it. Magic! Just look at this photo of the box above with the shipping label removed:

Rocks and leaves on the box, what’s up with that?!

“Content-Aware” fill, remember. Even if I selected the label precisely, which I didn’t, Content-Aware fill would still pick up the gray of the adjacent rock, although I could use the Clone Stamp or Healing Brush to fake the tape and make it work. This amazing, must-have feature has its limits, then, working best when what you want removed is surrounded by a more homogeneous background. 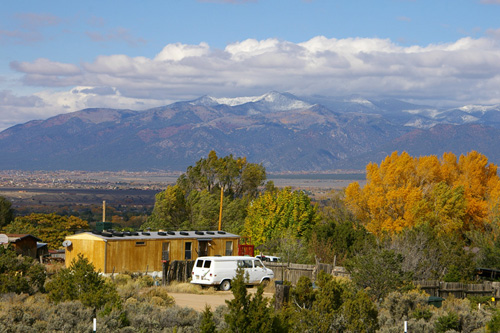 All right. Now this is tricky, but it works: SHAZAM, no neighbors! I used the Lasso tool to select the trailer, the utility poles, and the old white truck, then filled via Content-Aware. It isn’t perfect, but at a glance, it’s awfully close. We picked up a little of the fence on the other side of the van this time, so what. Just imagining the trailer is gone improves my mood. Come to think of it, this feature may be why real estate photos never show the landfill next door: 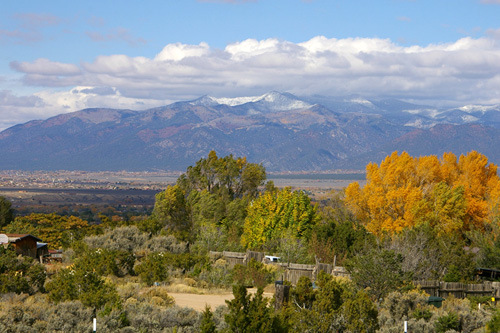 After testing this a number of times, I can say that selection is everything: the more carefully you excise what you don’t want, the less extraneous cruft will show up in the fill. Donny makes exactly the same point in Part One of his review, but he doesn’t mention another new Photoshop feature that warrants a look before I close: HDR Toning, oh yeah.

HDR stands for High Dynamic Range. (See Wikipedia entry here.) If you take a lot of pictures, you know that capturing high-contrast scenes are difficult: bright areas may be fine, but dark areas come out underexposed, and vice-versa. High dynamic range imaging is a technique for combining several images of the same scene in such a way as to even all this out, resulting in photos that are either more representative of what you’re actually looking at or present an even better view, often with spectacular effects. Adobe has revamped Photoshop’s HDR capability in CS5 with HDR Pro, a fantastic tool for professional photographers and outside the scope of this review, not to mention outside your author’s skill set. (This also requires multiple images.)

But for the rest of us, there’s the new HDR Toning option under Image > Adjustments. For this, you only need one shot. But you can play around with the many variables, come darn close to something really impressive, and save a “wasted” photograph to boot. Here’s a picture of Palo Duro Canyon in the Texas Panhandle south of Amarillo. It’s not too bad for a tourist photo, but a lot of the greenery is hidden in shadow, which left me wishing I could show folks how beautiful the vista really was: 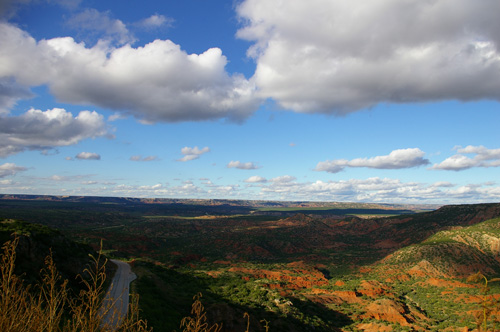 Selecting the default HDR Toning adjustment made me a happy boy. Just look at how the underexposed shadow areas now reveal more color, without washing out the sky. MUCH better, all around (view 750 px version here), and you can’t do this with simple lightening: 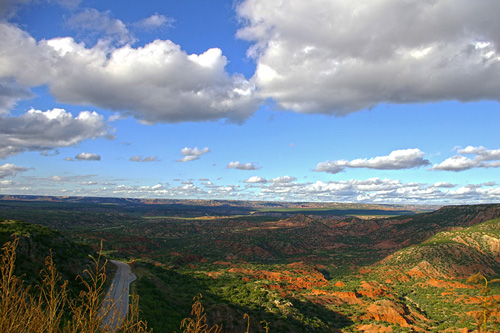 It’s expensive and it’s huge. Most of us don’t need it, and there must be other apps that handle some of what I’ve raved about, but all that seems beside the point today. For now, I love this software. Photoshop CS5 not only improves the neighborhood and saves important photos, but when I upgrade my iMac to 8 GB of RAM, this baby is gonna scoot with 64 bits. I hope you have a chance to try it, and may we all be blessed enough to own it someday.