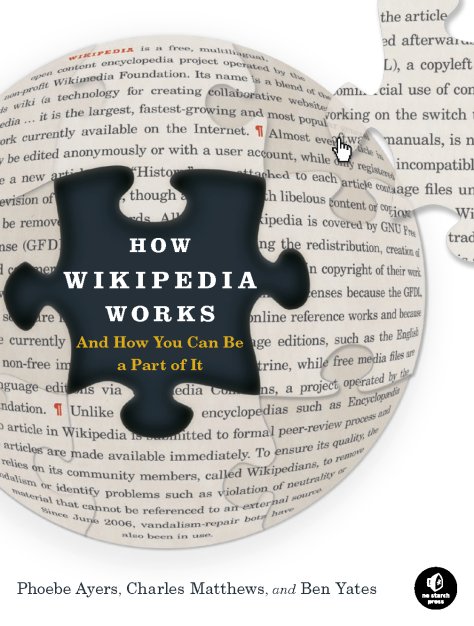 How Wikipedia Works is a guide to the inner workings of Wikipedia, the popular online encyclopaedia. Though deeply flawed as an academic tool, Wikipedia is certainly a very popular hobby, and a great many people â€” the author of this review included â€” enjoy making occasional edits to Wikipedia articles. The basics are generally very easy to pick up, but beyond a certain point some understanding of the underlying Wiki technology becomes useful, particularly once the editor switches from tweaking existing articles and starts writing entirely new sections or articles.

The book is divided into four sections, entitled Content, Editing, Community, and Other Projects. Broadly, the first section introduces Wikipedia and describes the types and quality of material to be found there. The Editing section focuses on the nitty-gritty of producing articles, covering everything from basic textual edits through to uploading images and the use of templates. The third section looks at the Wikipedia community, primarily the forms of communication between them, the policies Wikipedia editors are meant to follow, and how arguments between editors are settled. The final section is about the family of projects to which Wikipedia belongs, including the different language versions and the popular Wikimedia Commons free media library. Each of these sections is subdivided into chapters, of which thereâ€™s seventeen in total, plus a trio of appendices.

On the whole the material covered in this book is handled thoroughly and presented in the clear, stylish way weâ€™ve come to expect from No Starch Press. For example, there are six pages describing the process for adding inline references to text, one of the key things that differentiates a good article from a poor quality one. But while this book is thorough, it isnâ€™t exhaustive in its coverage. So looking at references again, only a few reference templates are shown, not all of them, so thereâ€™s still a certain amount of reading at Wikipedia required to completely master this essential topic.

Thereâ€™s really not much else to say about the editing side of this book. It doesnâ€™t cover every aspect of Wikipedia article editing but it does cover most of the important ones. Certainly anyone who considers Wikipedia a hobby rather than a lifetime vocation is likely to find this book perfectly useful and intellectually rewarding. Although pretty dry and humourless, it is at least very readable, and unlike some computer books doesnâ€™t assume that the reader is a dummy.

On the other hand, this isnâ€™t a scholarly critique of Wikipedia. For example, while there is a short section on how teachers can use Wikipedia, there is no discussion of whether they or their students should be using it at all. Similarly the authors observe that systemic bias is characteristic of Wikipedia, but donâ€™t really explain why that be beyond referencing the sorts of people who edit Wikipedia articles â€” the inference being that while most editors are knowledgable about modern American pop culture for example, but know next to nothing about medieval African pottery. The flip side to this explanation is why genuine scholars and credentialed academics avoid Wikipedia â€” which they do â€” an issue the authors of How Wikipedia Works simply donâ€™t comment on. As far as writing quality is concerned, the authors make some good suggestions as well as some fairly facile ones, like the recommendation that editors should read books like The Elements of Style to better their prose-writing skills. While such books are undeniably informative, the free-for-all editing approach to Wikipedia makes the creation of stylish prose basically impossible because someone else will eventually come along and decide to edit or otherwise mangle whatever previous editors have written. Where such limitations are discussed, theyâ€™re mostly done so by quoting from other Wikipedia users, and the authors themselves donâ€™t seem to offer any opinions on the political issues within the self-appointed and cliquey Wikipedia hierarchy. How Wikipedia Works is, at heart, an optimistic book that assumes the Wikipedia community works altruistically and towards a single goal of a good quality, authoritative online encyclopaedia. Anyone who has spent any time within the Wikipedia community will know that neither of those assumptions is true, and some aspects, like Requests for Adminship, are simply broken.

The bottom line is that How Wikipedia Works is a good introduction to the mechanics of the Wikipedia. It contains a lot of useful material that is presented clearly and in a practical way. What this book isnâ€™t is a review of Wikipedia history, politics or problems, and in that sense at least itâ€™s a bit less satisfying than it might have been. Still, for hobbyists looking for a good primer, How Wikipedia Works is hard to fault.