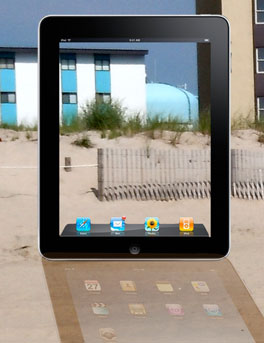 As I write this article I am in Ocean City, MD on my iPad 3G. We have been here for four days now, and I have to say I am really glad I bought the 3G model of the iPad. I am not disappointed in the performance of it at all. I am disappointed in the new data plan, but more on that later.

We are staying in a condo without WIFI, and the 3G service on the iPad has been fantastic. Full signal strength at all times. The speed of the network is slower than expected (I had never used any 3G device before, not even an iPhone) . However, for surfing the web, doing emails, and reading RSS feeds it is great. Downloading apps or other small items seems very slow. My wife streamed a movie through the Netflix app and it was low quality and choppy.

On to the data plan-

Between my wife and I we are using about one hundred megabytes of data a day. The only rule has been no videos, because I don’t want video to eat up our 2gb of data. (We decided to leave a few days early, which is when the video rule was lifted, knowing we didn’t need to worry about the data limit) We have been able to do everything we would normally do at home either through Safari or apps that access the Internet (beside watch the occasional video).

If ATT would have continued the unlimited data plan, as advertised when the iPad was announced this would not be an issue. However, we now have this 2GB limit, that is slightly restricting, unless you want to pay for a second months worth of data when you run out.

I honestly do not know how 2GB of data would be enough for a full month of normal useÂ  if you only had access to 3G. Of course, I am talking about two people using 100MB a day. Even cutting that in half for one person would be limiting. Sure it would get you through the month with 50MB a day and some to spare, but you would still have to limit video watching, app downloading, or iTunes downloading.

If you only did websites and email, and did not do any video or downloading I suppose you could get by.

For a one week vacation and two people wanting to stay connected to home and the world and email a picture or two back to family like we did, 2GB has been fine. Although, I think it would be a lot nicer with that unlimited plan, or at the very least a 5GB limit instead of 2GB. That would allow for a lot more freedom to do what you would normally do on your computer or back home with the WIFI connection.

Complaints about the data plan aside, I am still very happy with my decision to get the 3G model. I would do it again even with the limited plans. It is cheaper than a MIFI type of device, there is no contract so I can always turn it on when we go away, and it is A LOT cheaper than the Ocean City public WIFI service of $8/day.

Leave you comments below.

One thought on “Macspiration 116: Vacationing With My iPad 3G”