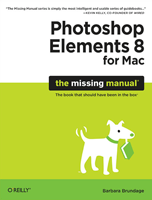 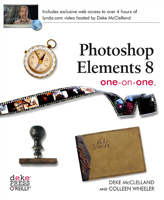 Adobe released Photoshop Elements version 8.0 for the Mac in November, 2009. For the price, especially if you compare it to its grand brothers Photoshop CS4 and CS5, you get a lot of good tools in Elements that are very powerful. But power come at a price: the learning curve. That’s why you may need a book to get you started. We have a review for you here, two books on Photoshop Elements 8.

Barbara’s book is, like its name implies, aimed at Mac users, while Deke’s book is specifically designed around the Windows version of the software. That is mostly irrelevant considering that the Windows version and the Mac version of Elements are virtually identical. But the Windows version comes with a mode that is called the Organizer while the Mac version is bundled with Bridge CS4. Both applications are used to manage and rate your files on the hard drive, but I think that Bridge is more powerful. Anyway, if you’re on a Mac, chances are that you are using iPhoto to manage your picture library.

As a Mac user who reads Deke’s book, you want to skip all references to the Organizer, and you must translate the Control Key to the Command one, and the ALT key is Option on the Mac. Other than that, you can read the book and do the exercises without having too many problems. Photoshop Elements 8: one-on-one is more oriented to intermediate-advanced audience than to newcomers to Elements. When you log in on O’Reilly’s site, you can download all the exercise files for the book and a video for each chapter. If you’re a visual person like me, that four hours of video is really great. The book also comes with a one week free trial of the Lynda.com tutorial videos lessons, where you can watch any training you want in that week.

Barbara’s book is build for the Mac version of Elements, so no key translations are required. This book also chooses the ecological way of letting you download the exercise files instead of bundling a CD or DVD with the book, but there are no video lessons of any kind. It exists to replace the manual that you did not get in the box with Elements. Photoshop Elements 8 for Mac: The Missing Manual covers most of the functions of Elements, one at a time, and grows from simple functions to some of the more complex ones. The audience for this book is more typically from beginners to intermediate users. It does not cover every single feature, but get you enough to understand the principles of each tool in your hands.

If Photoshop Elements 8 is the first version of the software you ever saw, I would say that Barbara’s book is the better one for you. If you’re already using Elements and need to explore more of the functions it offers, Deke’s book illustrates some great way to explore creativity with Photoshop Elements. For example, that kid’s picture in lesson 7 he transforms into a StarTrek like alien is astonishing. Both books are very well illustrated to help you follow the pace of the lessons.

One thing I really appreciated in the Missing Manual is the list of new features in Elements in the introduction chapter. I haven’t found any reference to that in Deke’s book. Even if you are an experimented user of Elements, but want to learn more specifically about the new features, this list is very helpful. It describes the new functions briefly and lets you know on which page you can find more informations about it. Deke’s book is written in a slightly larger font that is easier to my aging eyes, but with a smaller font size and more pages, Barbara’s book certainly has more content in it.

While I preferred the Missing Manual, I was a bit disappointed that it offered no real workflow integration with other Mac software, such as iPhoto. It talks a bit about Bridge and iPhoto, but not to a level that will help you discern what is the best way to have an integrated workflow between them. For example, as a photo organizer, iPhoto is great. But its management of RAW files is really poor, and the round tripping to an external editor is far from the refinement of Aperture. But there is a way to manage your iPhoto library so that Elements can also benefit from it too. Deke has a full lesson on the Organizer, which is totally useless for Mac users, but is great for people using the Windows version of Photoshop Elements 8.

Photoshop Elements 8 for Mac: The Missing Manual
MyMac Review Rating: 8 out of 10