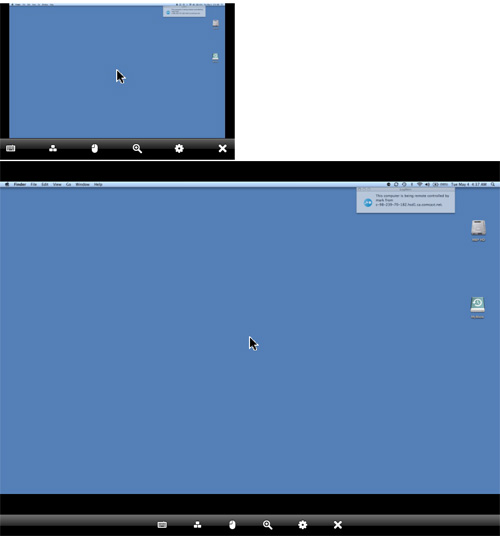 Does size matter? Well, in the world of computing, power and screen real estate are key factors when one is speaking about productivity. When the discussion turns to the difference between LogMeIn on the iPhone and iPad, a picture is worth a thousand words (or 1024 by 768 pixels to be specific). Indeed, in a pinch (no pun intended), LogMeIn on the iPhone is great! Admittedly, it is cramped and cumbersome to navigate and work on a remote desktop once one has experienced the wide open plains of LogMeIn on the iPad. However, If I had never purchased the iPad, I would still use this product on the iPhone. Imagine the possibilities of taking the full functionality of your home computer with you on the road. LogMeIn is, in a word, Freedom!

ALL THAT POWER IN THE PALM OF YOUR HAND! 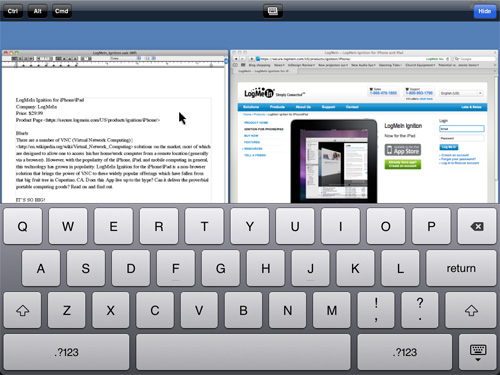 Excuse the unfortunate phallic reference and innuendo, but it just could not be helped. Think about what you could accomplish if you could access the power of your home computer from any location with internet access. As I sat at my local Starbucks coffee dispensary, I opened a new AppleWorks document (no wisecracks please, I like the simplicity of AppleWorks) and a browser window for additional research, all from my iPad while I enjoyed my Peppermint Mocha. After I worked on this review for a while, I opened up Final Cut and edited some video for a project which has a rapidly approaching due date. Can one be as productive as one might be on his/her home system? With enough practice working within the LogMeIn environment, one could get very close, IMO. Indeed, my LogMeIn equipped iPad has allowed me to bring all the power of my home system on the road. I am now more productive than I have ever been. If time is money, then LogMeIn has become my financial benefactor.

SOME OF MY FAVORITES
Key Combinations: LogMeIn Ignition allows one to use a couple of the many available key combinations within OS 10 (Cmd-Tab and Cmd-â€™). Obviously the expansion of this feature alone could make a huge difference in so many situations where your knowledge of a particular programâ€™s keyboard short cuts would greatly aid your overall productivity (more on this later).

Switch Between Monitors: if you have multiple monitors at home, or just one external monitor and a notebook connected, LogMeIn will al low you to switch between the to screens. Just shake your iPhone or iPad to switch between screens.

Access to Touch Gestures: With the ability to use many of the Touch Gestures available within the IPhone OS, LogMeIn Ignition is a very intuitive experience.

Access to Function Keys: When the keyboard is exposed, there is a small icon at the top center of the screen. This button will expose a secondary keyboard where one can use the F keys, directional arrows, and many of the other function type keys available on a standard keyboard. 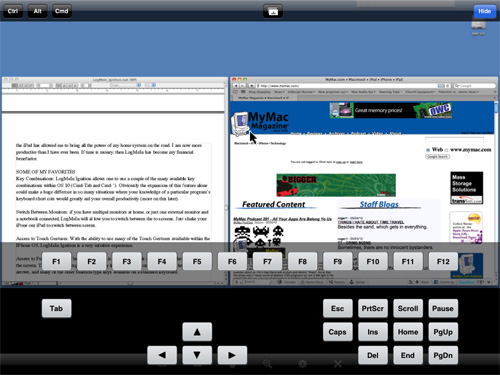 MAKING A GREAT APP EVEN BETTER
I really like LogMeIn Ignition for the iPhone/iPad. I find it very useful on both platforms even more so on the iPad. However, this is not to say that there is not room for improvement. One area I would like to see expanded is the Key Combinations Option. If LogMeIn could add a user programable area, either within the userâ€™s page on the LogMeIn website, or within the App itself, this would allow the user to preprogram the key combinations most often used and thereby improve his/her productivity exponentially.

MyMac.com Review Rating:
LogMeIn Ignition is a great App! The mark of a great App is one that employs a simple interface while at the same time allowing the user to harness the power of their hardware and creativity. LogMeIn Ignition indeed accomplishes these important directives with style and intelligent engineering. There is room for improvement, but as it is right now, I can highly recommend this fine App to anyone desiring to improve their productivity on the road. Therefore, I am awarding LogMeIn Ignition a well deserved rating of 9 out of 10 in our MyMac.com Rating System.