Over the past few years, in spite of veritable howls of protest from LCD-haters, Apple has slowly but surely moved towards offering only LCD screens, and away from offering matte screens, for both their laptops and stand-alone monitors. Matte screen lovers say that LCD screens have too much glare, and color fidelity is lacking.

Only recently has the Steve caved somewhat. For $50, you can now custom order a matte screen on the 15″ MacBook Pro. Standard configurations are still LCD only. Oh yes, MacBook buyers are out of luck â€” no matte screens for you!

The Weeks Division of MyMac Labs just happens to have a late 2008 15″ unibody MacBook Pro with the glossy LCD screen to evaluate Moshi’s iVisor, an anti-reflective screen protector.

The iVisor is a combination glare reduction and scratch protection film sized to fit screens for either a 13″ or 15″ unibody MacBook Pro. We tested the 15″ size. 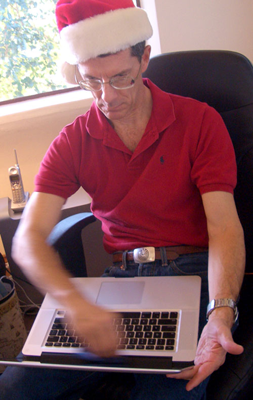 Moshi’s claim that the protector is easy to apply was true. First, make sure you thoroughly clean the screen, as you don’t want to entomb any grime, slime, or crud underneath the iVisor. We used a damp cotton rag followed by a micro-fiber cloth. 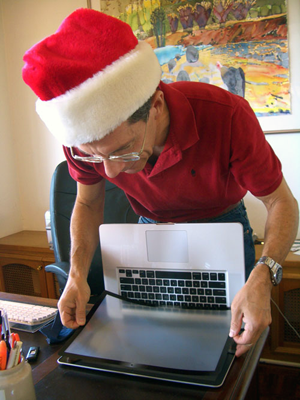 The iVisor went on properly the first time, as we made sure to align the hole in the protector with the iSight camera at the top of the MacBook Pro’s bezel. It was a no-fuss, no-muss experience.

Right away, it was apparent that the iVisor does what it claims: reduce glare and highlights from LCD screens. But as with so many things, it takes a while to see how well it works.

We used the iVisor-equipped computer on a four day business trip, evaluating it in all sorts of lighting conditions: direct lighting, indirect lighting, bright rooms, and dimly lit rooms.

We were mostly pleased with the iVisor, but it was not perfect. Compared to a “real” matte screen, a screen with an iVisor has a slightly murky appearance that reduces the contrast a bit. From time to time, I felt I had to turn up the brightness slightly to compensate for what appeared to be a small reduction in light transmission. This was most noticeable in low light conditions when I would normally have the screen brightness down.

In bright light, most users will have their screens at full brightness, and won’t notice the iVisor’s slightly filmy quality.

I did not go out of my way to test the iVisor’s protection qualities. But having had one experience with getting ink on a MacBook Pro screen (which I never want to repeat) I can say that if you get ink or some other contaminant on the iVisor, you simply replace it with a new one. I can assure you that replacing a 15″ LCD screen is a whole lot more expensive than buying another $38 iVisor.

Don’t worry that the iVisor will be stuck on your screen forever. It’s removable. You simply lift one corner with a thumbnail, pull gently, and the iVisor peels off, without leaving any residue on the screen. For storage, I placed it back on the shipping material it came on.

Conclusion: Moshi’s iVisor is worthwhile if you have an LCD-equipped MacBook Pro, and the screen glare is annoying. Screen protection is worth having, as well. Applying the iVisor is easy. There is a slight reduction in brightness and contrast in some ambient light conditions.