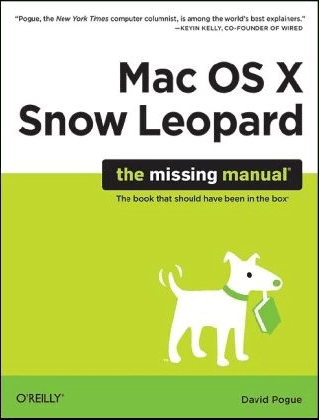 One of the most compelling new features about Appleâ€™s recently-released operating system, Mac OS X 10.6 (a.k.a. â€œSnow Leopardâ€), is the price$29, as opposed to the traditional $129 for all previous Mac OS X releases. This puts David Pogueâ€™s latest entry in his â€œMissing Manualâ€ series in the rarified position of actually costing more than the new OS itself.

Fear not, though, as â€œMac OS X Snow Leopard: The Missing Manualâ€ certainly merits its $34.99 price tag. The same might not apply to Mac OS X 10.6 itself, however; its numerous documented bugs (including a serious one involving major data loss), as well as a host of compatibility issues with third-party applications and peripherals, have made some wonder whether making the leap to Snow Leopard is worth the asking price.

For now, weâ€™ll leave the debate over the relative merits of OS X 10.6 to the early adopters, and instead focus our attention on the subject of this review. The first thing that struck me about this particular Missing Manual was its sheer lengthâ€”over 900 pages that cover an operating system Apple specifically promoted as providing very little in the way of new features. Of course, since this is a comprehensive guide to all things Mac OS, everything that hasnâ€™t changed since 10.5 still needs to be addressed, in addition to the under-the-hood improvements and subtle refinements 10.6 brings. Pogue notes in the bookâ€™s introduction that even though major new features were limited in this release, there were hundreds of â€œundocumented, tweaky little changesâ€ that made drafting the manual a unique challenge.

To that end, this OS X 10.6 Missing Manual edition sports a collection of â€œSnow Leopard Spotsâ€ sprinkled liberally throughout, which offer brief detail on aspects of the OS that have been subtly changed with this new release. Because these brief inclusions put each change in context with whatâ€™s being discussed on the surrounding page, this approach is far more helpful than simply including a lengthy list of every single aspect of the system that differs in any way from OS X 10.5. This is just one of the ways in which Pogue attempts to structure the 900-plus pages of information about Snow Leopard in a way thatâ€™s most useful to the reader.

One of the more daunting challenges in writing a â€œcomputerâ€ book as opposed to, say, a book of recipes, is that the readerâ€™s level of experience can vary tremendously. In this case, it can range from someone who just bought a new 21.5â€ iMac because her granddaughter convinced her she needed to start using a computer, all the way to the seasoned Mac pro who started with the Macintosh back in the late 1980s/System 6 days. So how do you write a single volume that can speak to this range of experience? Well, in many cases you simply donâ€™t; you write for one group only, and on the back of the book you note that itâ€™s intended for â€œadvancedâ€ users, or that itâ€™s targeted to the â€œbeginnersâ€ level.

What Pogue has done with this â€œMac OS X Missing Manualâ€ series is developed a way to make a single computer book useful for all experience levels. Heâ€™s accomplished this by targeting the primary content to â€œadvanced beginner or intermediateâ€ readers, while aiding newbies with special â€œUp To Speedâ€ sections that cover the basic concepts of the OS. These sections offer simplified introductions to subjects as varied as the System Preferences panel (p. 319), the various account types (POP, IMAP, Exchange, etc.) used to set up your email accounts (p. 699) and the Color Picker (p. 199).

For the more advanced Macolytes among us, â€œPower Usersâ€™ Clinicâ€ callouts give in-depth info on aspects of the OS that most users wonâ€™t ever be delving into, like setting up Groups to better manage file sharing with multiple users (p. 466), or accessing the hidden diagnostic mode in the AirPort menulet (p. 674). Throw in additional callouts like â€œFrequently Asked Question,â€ â€œGems in the Rough,â€ â€œTroubleshooting Moment,â€ and â€œWorkaround Workshopâ€ and what youâ€™ve got is a book that can be read more or less the way you want to read it, adjusting along the way for your level of experience. Wired magazine co-founder Kevin Kelly once credited David Pogue with being â€œamong the worldâ€™s best explainers,â€ and should you have any doubts about that, Iâ€™ll put forth the â€œUp To Speedâ€ box on page 194 as Exhibit A, wherein he offers what is probably the most lucid and concise explanation of 64-bit computing that has been penned to dateâ€”even for those of you who proudly include yourself in the â€œPower Userâ€ category.

Throughout the book, itâ€™s Pogueâ€™s ability to make the complex simple, and the simple infinitely readable, that makes these Missing Manuals shine. Letâ€™s be realistic, thoughâ€”I doubt that any author, even one of Pogueâ€™s calibre, expects you to sit down and read what is essentially an ownerâ€™s manual from cover to cover. For most it will serve as a reference, to be called upon when they are confronted with a task they canâ€™t perform, or a concept they simply donâ€™t understand. But given the style in which this Missing Manual is written and designed, itâ€™s not inconceivable to think that some might be tempted to read at least a few chapters at a stretch, as they become accustomed to working with a Macintosh computer for the first time, or if theyâ€™re really committed to understanding and exploring the changes that 10.6 brings to their Macs.

In addition to its sheer readability, thereâ€™s another reason why David Pogueâ€™s â€œMac OS X Leopard: The Missing Manualâ€ has been the bestselling computer book in America since it was released September 2007, and why this new Snow Leopard edition should enjoy similar success. Put simply, itâ€™s the follow-through. An ordinary computer book might display a screen shot of a dialog box featuring a checkbox that reads â€œDisable Whiz-Bang Feature #27,â€ alongside a narrative that provides patently useless guidance like â€œClick the checkbox to disable Whiz-Bang Feature #27.â€ In Pogueâ€™s books, this Missing Manual being no exception, youâ€™re told precisely what â€œWhiz-Bang Feature #27â€ is, in as clear and concise a manner as possible. Thenâ€”and this is what I mean by â€œfollow-throughâ€â€”youâ€™re told precisely why youâ€™d want to disable this feature, as well as why you might want to leave it enabled. Itâ€™s tacking a â€œwhyâ€ onto the â€œwhatâ€ that makes these books bestsellers.

Whether youâ€™re a new user just getting up to speed with Snow Leopard and your new Mac, or an experienced one struggling with the myriad of compatibility issues that have arisen with this version of the OS, I canâ€™t think of a better companion to take along on your journey. As the book itself points out, OS X 10.6 offers more of everythingâ€”but still no manual. Then again, I doubt if Apple could have done a better job here than was done by Mr. David Pogue, explainer extraordinaire.